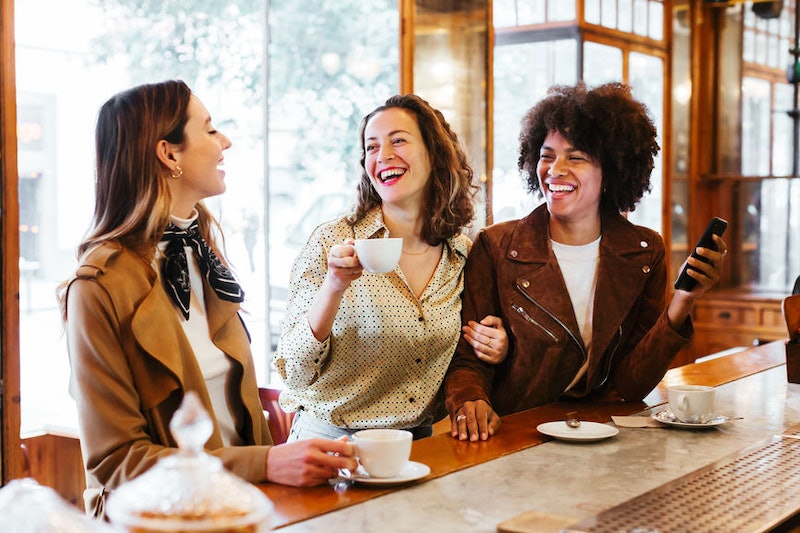 BONNINSTUDIO/Stocksy
By Emily Dixon
May 5, 2019

Consider another misogynistic myth disproved: women don't share more negative gossip than men, researchers from the University of California, Riverside, have found. What's more, there's nothing inherently malicious about gossip: for the most part, it's just sharing neutral information about somebody who isn't part of the conversation. All good ammunition the next time someone tries to tell you that women are intrinsically bitchy, or female friendships thrive on cattiness, or one of the many other desperately worn out stereotypes about lasses, wouldn't you agree?

Megan Robbins, an assistant psychology professor at UC Riverside, as well as Alexander Karan, a graduate student Robbins worked with, used data from five existing studies, several of which Robbins contributed to. A total of 467 people (269 women and 198 men) between the ages of 18 and 58 participated; in each study, participants wore a device known as an Electronically Activated Recorder, or EAR, which recorded around 10 percent of their conversations every day for later analysis.

For the purpose of the study, published in the journal Social Psychological and Personality Science, Robbins and Karan defined gossip as "sharing information about someone who is not present." From an academic's perspective, they noted, gossip can be positive, negative, or neutral — there's nothing fundamentally "bitchy" about it, in short.

"With that definition, it would be hard to think of a person who never gossips because that would mean the only time they mention someone is in their presence," Robbins said in a press release. "They could never talk about a celebrity unless the celebrity was present for the conversation; they would only mention any detail about anyone else if they are present."

"Not only would this be difficult, but it would probably seem strange to people they interact with," she added.

Using this definition, the researchers counted 4,003 instances of gossip from the data, proceeding to classify each occurrence as positive, negative, or neutral. The findings? While women gossiped more than men, this was only true of "neutral, information-sharing gossip" — which, as the researchers noted, could be explained by previous studies indicating that women talk more about social topics than men.

Around 14 percent of the total conversations recorded were gossip, but almost three quarters of that gossip was neutral. Of the remaining, charged instances of gossip, negative gossip was twice as common as gossip. Younger adults were "slightly" more prone to negative gossip than older adults, the researchers found.

The study also disproved another stereotype: the classist notion that poorer, less-educated people gossip more than wealthier, more-educated people. Those most likely to gossip, meanwhile, were extroverts. "A key feature of extroversion is sociability, so it has unsurprisingly been linked to more talking with others," the study authors wrote. "The present study revealed that extroverts also talk more about others."

Robbins and Karan's overall conclusion? "Despite variation in frequency, nearly everyone in the study gossiped, supporting the notion that gossip is ubiquitous." So next time someone tries to cast aspersions on female friendships or accuse women of relentless muckraking, feel free to let them know the science says otherwise.