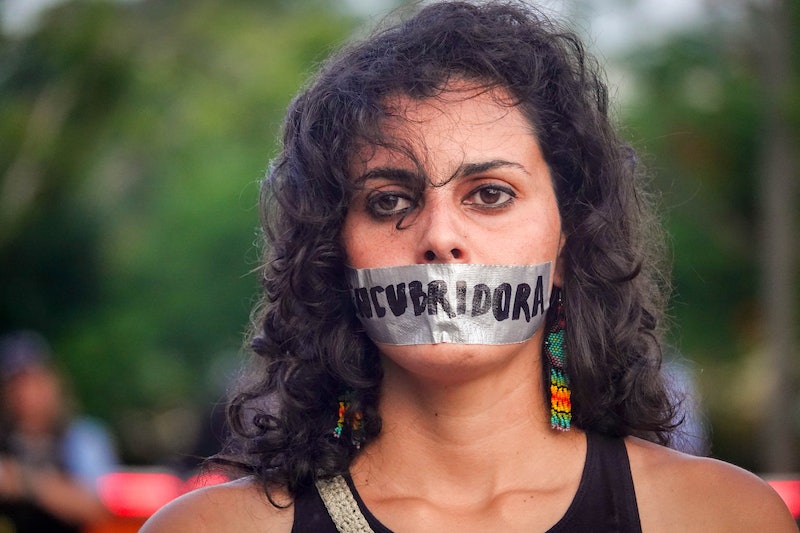 Nine young women sat in front of an orange barricade separating them from police officers guarding La Fortaleza, the Puerto Rico governor's mansion. They wore silver duct tape across their mouths that read “renuncia,” calling for former Gov. Ricardo Rosselló and members of his administration to resign. All around them, femmes chanted, “soy pata, soy puta, pero nunca corrupta” — “I’m queer, I’m a slut, but never corrupt.” As night fell, a new group of female demonstrators lined up on top of a concrete barrier, using their shirts as face masks as they stared down officers in riot gear. This is what the Puerto Rican uprising that ousted the governor, a first on the island, and aims to expel political corruption and challenge colonialism looks like: young, queer, and women-led.

Despite history forgetting their contributions, women have always been integral to revolutionary movements on the Caribbean isle, where people have resisted Spanish colonialism and U.S. imperialism for hundreds of years. In 1868, Mariana Bracetti knitted the Flag of Lares, a symbol of sovereignty, and participated in the municipality’s uprising against Spain, for which she was imprisoned. In 1937, Dominga de la Cruz Becerril rescued the Puerto Rican flag before it hit the ground during the peaceful demonstration for independence from the United States that turned into the Ponce massacre; she, too, was arrested and jailed for one day. In 1950, Blanca Canales led an insurgency in the rural town of Jayuya and ultimately spent 17 years behind bars. In 1951, Isabelita Rosado distributed nationalist literature, leading her to serve nearly 13 years in prison. In 1954, Lolita Lebrón led a group of nationalists in an attack on the U.S. House of Representatives, for which she was imprisoned for 25 years.

Now, in 2019, hundreds of thousands of women and femmes who fronted Puerto Rico’s largest uprising to date follow in the footsteps of these women, and many more whose names are left out of the archives.

Women Exposed Rosselló’s Corruption. Then They Overthrew Him.

Journalist Sandra Rodríguez first revealed the government’s improprieties on July 10, when she posted on her blog several pages of leaked texts between Rosselló and some members of his administration. Three days later, Puerto Rico’s Center for Investigative Journalism (CPI), headed by Executive Director Carla Minet, released all 889 pages of these messages. The women-led reporting of the chats, which contained misogynistic, homophobic and transphobic messages, as well as evidence of Hurricane María relief mismanagement and political corruption, drove hundreds of thousands of Puerto Ricans to the street in protest. There, female journalists and photographers have been covering how the people of an occupied island wield their democratic power.

“Documenting these protests is my way of contributing to Puerto Rican history,” Mari Blanca Robles López, an independent photojournalist who has attended most of the demonstrations, tells Bustle. “Our stories should be seen and told as honestly as possible, and that can only be done when we do it ourselves.”

"Women have always been the backbone of social movements. In this particular case, we are not only the backbone but also on the frontlines."

Members of The Colectiva Feminista en Construcción, a feminist organization that was targeted in the governor’s chats and has long railed against his administration, were among the first to spring into action on July 11. The group rallied nearly 100 people at the Luis Muñoz Marín International Airport airport in San Juan, where they received an embattled Rosselló returning from France with signs and chants that criticized his defense of former Secretary of Education Julia Keleher. Keleher had been arrested by the FBI on charges of fraud and money laundering that week.

“We were calling the governor out because he vouched for the ex-secretary of education, who closed down over 300 schools. At that moment, the chats were leaked,” Shariana Ferrer, an organizer and co-founder of the collective, tells Bustle. “We’ve been on the streets since before the chats, and it was fundamental when they were made public for this to get bigger.”

For Puerto Ricans, the leaked chats were a catalyst for an insurgence that had been brewing for years. The island has been in recession since 2006, and Puerto Rico’s debt swelled to $123 billion in 2017 following back-to-back Hurricanes Irma and María, which devastated the island and compounded its housing, education, and health care crises. While Puerto Ricans, nearly half of whom live below the poverty line, remain desperate for aid, an unelected fiscal control board has slashed funding for public services; public servants have been accused of stealing millions of federal dollars; and the Trump administration plans to place new restrictions on disaster aid for the island. Hundreds of thousands have fled, either because they’re displaced or seeking opportunities abroad. For many who remain, this fight is about the uncertain fate of their people and homeland.

"This is a struggle for the people and by the people," Ferrer said. "Women have always been the backbone of social movements. In this particular case, we are not only the backbone but also on the frontlines."

Aliana Margarita Bigio-Alcoba and some friends began passing out printed copies of the governor’s chats in Spanish and English to passersby in Old San Juan on July 12, the day the extended logs were leaked. The women hoped to spread awareness about the then-little-known news. Since then, the group of about 15 women, a mix of students, activists, and bloggers, have been holding almost-daily sit-ins at La Fortaleza.

“Women took the lead, mostly because we are the ones who had to historically carry the burden of having a corrupt government: moms dealing with a bad economy, women suffering domestic violence,” Bigio-Alcoba, creator of the feminist blog Con(Sentimiento), tells Bustle. “We live in a Puerto Rico that is extremely violent to women specifically. I think that’s why we have said, ‘this is enough.’ We are not waiting for anyone to talk for us. We have the experience firsthand on what corruption has done to us.”

"Women have been silenced for too long, but now the daughters of this crisis are standing up to the government and saying ‘enough.'"

Through her Instagram, the 21-year-old student and activist has also been explaining what’s happening in Puerto Rico with digestible overviews of the chats, notifications on upcoming demonstrations, and tips for protesters to prepare themselves and commute to rallies.

“In Puerto Rico, protesting is vilified. It’s believed to be just for revolutionary groups and assumed that you’ll get hurt if you go,” she says. “I wanted people to see it’s not like that. It’s accessible. The most important thing as activists and people doing political work is to cut the bullshit and explain things as it is.”

Not far from Bigio-Alcoba, a group of young women creatives called las hijas de la crisis, or the daughters of the crisis, have been gathering in front of the Capitolio, the capitol building, where they use visual and performance art to represent the pain and frustration of their people. The demonstrators, a mix of models, bloggers, artists, photographers, and activists, dance to plena, a folkloric musical genre, and paint their bodies in protest. Anamar Perez Green’s performance, captured in photos that have gone viral, depicts an island anguished by both political and natural calamities. Black tears stream down her taped mouth and onto her bare Puerto Rican flag-painted chest.

“It’s been a really emotional moment for all of us. We are all in pain and stressed. If you are there, you could feel the tension of the people,” the 19-year-old model-activist tells Bustle. “But it’s also amazing. I have never seen Puerto Rico unite like this. Women have been silenced for too long, but now the daughters of this crisis are standing up to the government and saying ‘enough.’”

Fighting Police Violence And Machismo To "Build Another Life"

But like their revolutionary foremothers, the women and femmes of Puerto Rico’s current uprising are encountering police violence. A report by Kilómetro Cero, an organization that’s working toward cultivating police accountability on the island, notes there have been at least 37 instances of violent use of force or questionable arrests since the protests began. On July 17, police forcefully grabbed an unidentified woman from a barricade before dispersing thousands with tear gas and pepper spray. A video from that same night shows an officer shoot demonstrator Rocío Juarbe in the back with rubber bullets as she tries to calm a rowdy but lawful crowd.

Brigada Legal Solidaria is a group of attorneys and law students monitoring police force and action during the protests that’s been offering free representation to those violated while exercising their First Amendment rights. Mariana Nogales Molinelli, a lawyer and member of the group, tells Bustle that one woman she’s working with had to visit an ophthalmologist because officers pepper-sprayed her in the eye. Another woman, who was not charged for any crime, was detained for 24 hours before being released, Nogales Molinelli says.

“Men joined this fight because of women. If they didn’t, they would look like asses.”

“The police, as a force, is very male-chauvinistic and machista,” she tells Bustle. “They target women and the LGBTQ crowd. They see them as a threat. They don’t think women should be on the streets, so they like to baton women, throw pepper-spray in their faces. It’s direct and violent. They are intentional about hurting them.”

“Misogyny is still rampant and very dangerous on the island, which only confirms that men still have a lot of work to do to unlearn their misogyny and to be authentic and honest,” the 26-year-old tells Bustle.

On the question of why men who uphold toxic masculinity have been present at the actions, they added: “Men joined this fight because of women. If they didn’t, they would look like asses.”

During a powerful impromptu speech María José gave on top of a bus on July 22, when protesters shut down the highway Expreso Las Américas, they laid out their vision for Puerto Rico.

“The future has arrived, and the future is trans, it's nonbinary, it's Black, it's feminine, it's fat, it rolls in a wheel chair, it's deaf, it's mute, it's immigrant, it's empathic and fair,” they declared, as the crowd erupted into cheers. “If you are not ready for that future, you can either lock yourself in your room and drown in your own poison or you can join our movement of love and justice for all.”

This is the destiny that many of the women and femmes on the frontlines of this struggle are fighting for. As they prepare for their next battles, which include holding Rosselló’s chosen successor, Pedro Pierluisi, accountable; auditing the island’s debt; dissolving the fiscal control board; declaring a state of emergency against gender-based violence; reopening public schools; and beginning a process toward self-determination, these protesters are also working within their communities to dismantle all systems of oppression. Unlike the revolutions of their ancestors, which were predominately led by university-educated, cis, straight men, the women and femmes leading this uprising know that a just and free Puerto Rico will only be possible if their movement isn’t soiled with misogyny, anti-blackness, classism, homophobia, transphobia, and ableism.

“We are building another life,” Ferrer says. “This is a permanent revolution. We must understand that in order for us to create a new reality and radically transform society, it’s going to be a lifetime commitment.”