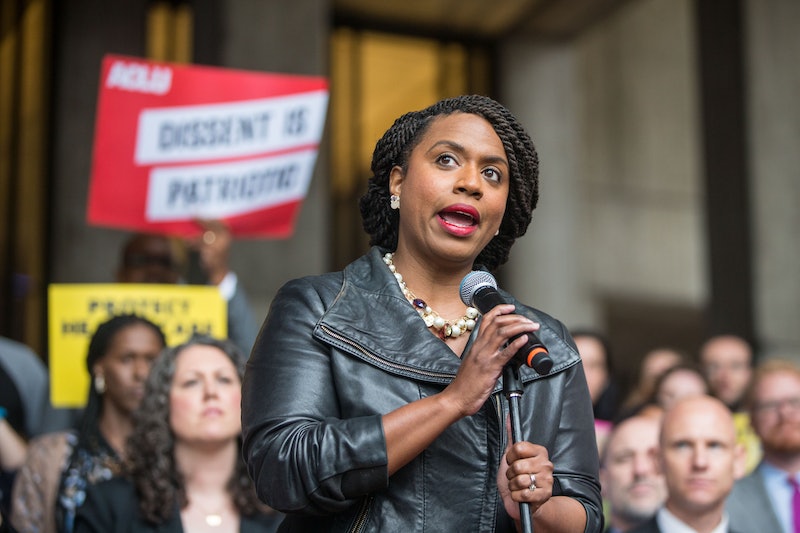 White men are no longer the majority of Democratic candidates for Congress — not in the House nor in the Senate. While many have spoken of the wave of women who will be elected in the 2018 midterms — and even the LGBTQ wave — what could be the most dramatic change in representation comes from the increase in women of color candidates running for Congress and state legislatures.

Women of color candidates have increased some 75 percent since 2012, according to a new study by the Reflective Democracy Campaign, a group that works to research and disrupt "the demographics of power in the United States." That means for every four women of color who were running in 2012, there are seven this year.

The report makes clear that the status quo has not been diverse. Some 65 percent of all candidates and 65 precent of all elected officeholders at the local, state, and federal level have been white men — even though white men are just 32 percent of the population. Now, that's changing, with the biggest increase among women of color.

"Voters want politicians who share their life experiences and who have a real stake in the decisions they make," Brenda Choresi Carter, director of the Reflective Democracy Campaign, said in a statement provided to Bustle. "Recent movements like #BlackLivesMatter and #MeToo have crystallized the need for decision-makers to come from the communities they represent. It’s increasingly clear that we can’t rely on elected officeholders who represent a single, narrow slice of the American people."

That 75 percent growth takes into account both political parties — although a larger total number of women of color candidates are Democrats. Women of color make up 11 percent of Democratic candidates running for Congress this year (up from 7 percent in 2012). This year, white women are another 30 percent, men of color, 17 percent, and white men, 42 percent.

Comparing between the House and Senate, the House has the potential to include more representation. Just 2 percent of candidates running for the Senate are women of color — unchanged since 2012. It's in the House where the difference can be seen. Some 7 percent are women of color now, compared with 4 percent in 2012.

If you want to delve into these numbers even further, go find the whole report, "A Rising Tide? The Changing Demographics on our Ballots," at WhoLeads.us, the official site of the Reflective Democracy Campaign.