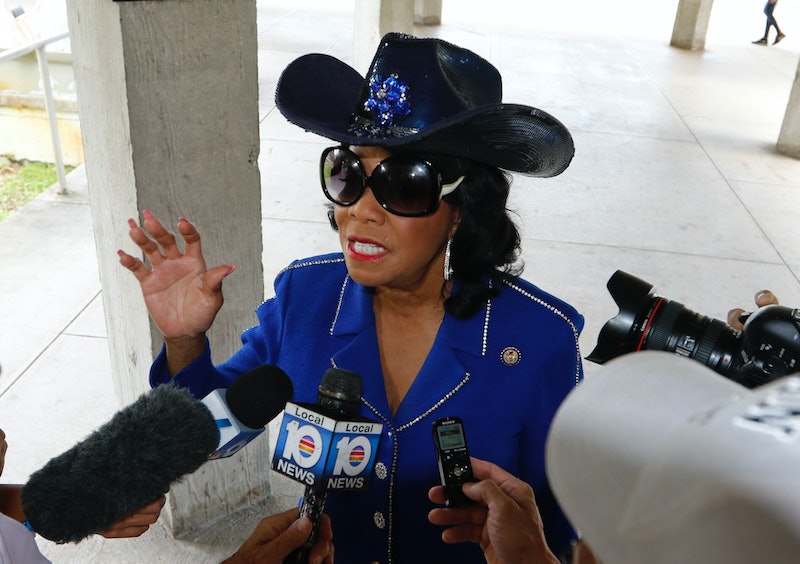 White House Chief of Staff John Kelly's comments against Florida Rep. Frederica Wilson have sparked criticism from The Congressional Black Caucus, specifically the women members of the organization. In a statement released on Sunday, the female members of The Congressional Black Caucus demanded an apology from Kelly for "his reckless and false statements" issued against the Florida representative. The statement was signed by prominent figures like Maxine Waters of California, Yvette Clarke of New York, Barbara Lee of California, Marcia Fudge of Ohio, and at least a dozen others.

In the statement from The Congressional Black Caucus, the members explained, "We were appalled by White House chief of staff John Kelly’s statements where he called Congresswoman Wilson an ‘empty barrel’ and accused her of taking credit for securing funding for a new FBI Building in Miramar, Florida that was named after two fallen FBI agents, Benjamin Grogan and Jerry Dove."

The collective statement went on to request an apology from Kelly.

General Kelly’s comments are reprehensible. Congresswoman Wilson’s integrity and credibility should not be challenged or undermined by such blatant lies. We, the women of the Congressional Black Caucus, proudly stand with Congresswoman Wilson and demand that General Kelly apologize to her without delay and take responsibility for his reckless and false statements.

The criticism is directed at Kelly's comments issued during a Thursday press conference. During the appearance, Kelly focused on Wilson and said, "A congresswoman stood up, and in a long tradition of empty barrels making the most noise, stood up there in all of that and talked about how she was instrumental in getting the funding for that building, and how she took care of her constituents because she got the money, and she just called up President Obama, and on that phone call, he gave the money — the $20 million — to build the building, and she sat down, and we were stunned." Essentially, Kelly accused Wilson of reportedly bragging about receiving funding for an FBI building in Miami in 2015.

A day later, Kelly was corrected by media outlets that noted that his account of events was not accurate. A video shared by The Sun Sentinel on Friday showed a video of Wilson discussing the legislation without mentioning finances. It is worth mentioning that the video appears to be in stark contrast with Kelly's description. In the video shared by the The Sun Sentinel, Wilson does not mention funding at all. In fact, she can be seen thanking her political peers, both Democrats and Republicans, and then honoring the FBI.

It wasn't just the Congressional Black Caucus that denounced Kelly's remarks. Wilson, too, demanded an apology from the White House chief of staff for his remarks which she believed constituted "character assassination." On Sunday, the Florida representative spoke on MSNBC and said, "Not only does he owe me an apology, but he owes an apology to the American people." She also described Kelly as a "puppet of the [Donald Trump]." In spite of the mounting disapproval and criticism against him for his comments, Kelly has yet to respond to either Wilson or the collective Congressional Black Caucus statement.

In addition to being criticized for accusing Wilson of dishonesty, Kelly came under fire when the Florida Rep. described his deployment of the term "empty barrel" as a racially-charged signifier. "I think that's a racist term too," Wilson claimed to CNN, "I'm thinking about that when we looked it up in the dictionary because I had never heard of an empty barrel and I don't like to be dragged into something like that." During a Friday press conference, however, Press Secretary Sarah Huckabee Sanders responded, "If you don't understand that reference I'll put it a little more simply. As we say in the south, all hat, no cattle."