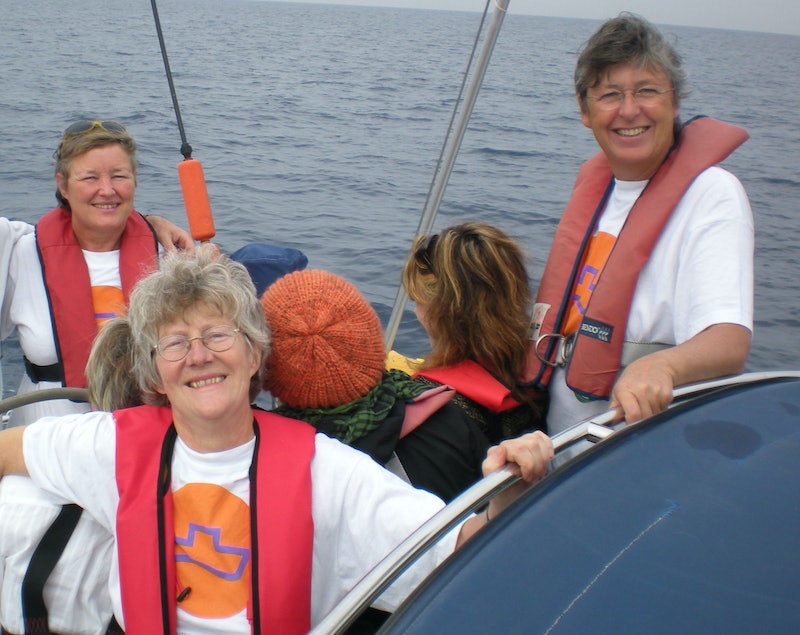 For many of us, the idea of a boat with a full crew roving the ocean from port to port, transcending the laws of the land, evokes images of pirate ship. But, instead of looking for lost treasures, the crew behind Women on Waves has claimed the seas for abortion services and women's health care. In many ways, they could be considered a new brand of pirates, except instead of raiding and pillaging, they're aggressively seeking reproductive rights justice.

The ocean bound non-profit Women on Waves was originally launched in 1999 by the Dutch physician Rebecca Gomperts, as a way to bring legal abortions and reproductive health services to women in countries with restrictive abortion laws.

Bustle spoke with Leticia Zenevich, a campaign officer for Women on Waves, via Skype about the history of the organization, as well as the practicalities of being what is, effectively, a sailing women's health clinic.

While speaking with Bustle, Zenevich explained that traveling in international waters gave Women on Waves the freedom to conduct abortions legally, so long as the boat flew the flag of a country with legal abortion.

To the uninitiated, the concept of receiving an abortion on a boat brings up a lot of questions, like how many doctors are on board? Perhaps the biggest one is simply: is it safe?

"We have two doctors onboard, ob-gyns that have extensive experience in abortion," Zenevich says. "The abortion offered on the boat is a medical abortion, which means it only takes a pill (mifepristone) to have a safe and effective abortion. A second set of pills (misoprostol) are used to expel the product of the pregnancy. Abortion with pills is very safe and effective and has low risks of complication."

Due to the limited time spent docked at each country and issues of space, Women on Waves hasn't at this point conducted any surgical abortions, according to Zenevich.

Planning a voyage for Womens on Waves takes month or preparation and coordination.

"Where we travel depends on our resources, the availability of the crew and doctors and of local participants," Zenevich says. "A boat campaign take months of planning. Women on Waves has been to Ireland, Poland, Spain, Portugal, Morocco and Guatemala with the boat. We had drone actions (in which a drone carrying abortion pills has been sent from one country to another) in Poland and Ireland."

Comparing how some of the governments respond to Women on Waves versus how the women going aboard do, speaks volumes about how the state often fails to acknowledge the reality of women's actual health needs.

The justice pirates of safe abortions will continue to travel where they can, when they can.

Zenevich tells Bustle that Women on Waves intends to appeal the detention to court as a human rights violation. "We will demand the government in all possible courts for all the violations of human rights against the participants of the campaign," she says.

Zenevich shares how the boat acts as an equalizer for women from vastly different cultures. What is universal, she says, is the positivity and relief women experiences after receive the abortion and health services they seek. "They are mostly relieved and grateful," says Zenevich, "Our experience abroad shows what the scientific research has been showing: women have predominantly positive feelings after having an abortion."

As it stands, there is a gaping need across the world for more and better abortion and other health care services for women. The justice pirates of safe abortions will continue to travel where they can, when they can.

"Our main concern is that women's human right to health is selectively denied to women based on where they are born or how much money they have."

Ultimately, according to Zenevich, Women on Waves hopes to see a rise in healthcare access for women across the board.

"Our main concern is that women's human right to health is selectively denied to women based on where they are born or how much money they have."

More like this
Charlene White & MPs Lead Tributes For Bristol Bus Boycott Organiser Roy Hackett
By Sam Ramsden
'The Capture' Is Finally Back – & S2 Looks Tense AF
By Sophie McEvoy and El Hunt
The Lionesses Are Calling For Equal Access To Football In Schools
By Sophie McEvoy
42 Black Owned Fashion & Beauty Brands To Support Today & Always
By Mekita Rivas, Shea Simmons, Kui Mwai and Dominique Norman
Get Even More From Bustle — Sign Up For The Newsletter