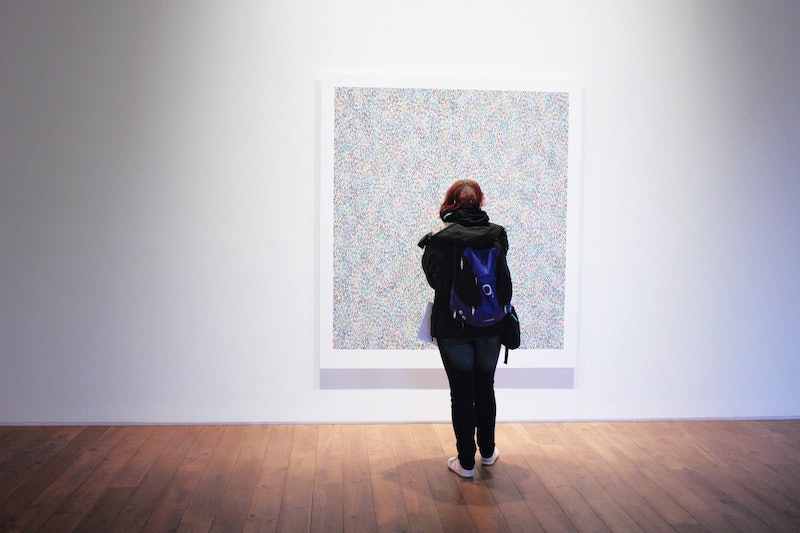 When career fields are dominated by men, it's usually assumed that this is because men make up the majority of students training in that discipline. In fields like computer science, this is true — but when it comes to the art world, the story is quite different. Though Hyperallergic's editor, Jill Steinhauer, noted that women make up 60-75 percent of those studying art at a university level, a report on gender disparity in the arts compiled by the National Museum of Women in the Arts showed that female artists rarely comprise more than 30 percent of the artists shown in museums and galleries. The NMWA further reports that, “Though women earn half of the MFAs granted in the US, only a quarter of solo exhibitions in New York galleries feature women." Though this statement was based on a study from ten years ago, according to an article published in Artnews in 2015, the stats haven’t changed much in the past decade .

This isn't a new problem, or an unexamined one. Vogue recently highlighted female artists tackling gender bias in the industry. Prior to that, the Huffington Post announced that “For the foreseeable future, art fans venturing to NYC’s palace of modern art will be ogling over male artists, and a lot of them.” The Guardian declared the art world has "airbrushed" women artists out of history. But while all of these pieces point out the disappointing numbers, they don't necessarily explain why the ratio from art school to the real world ends up being flipped so dramatically.

“I’m tired of being asked the question, ‘Why is there continued inequality?' I always think to myself, what planet are you living on? We live in a society ruled by males in every sector, not just art”, says Maura Reilly, a curator and writer based in New York City. Reilly is no stranger to the subject of this gender gap in the art world. She’s held Senior Curator positions, was the founding curator for the Elizabeth A. Sackler Center for Feminist Art at the Brooklyn Museum, and has written about the arts, and its gender disparity, extensively. The fact that we’re still asking this question, she explains, “says so much more about the person asking it, and their lack of understanding that we live in a patriarchy."

“As far as women being encouraged to pursue their careers, they absolutely are. They are pursuing them as vehemently and as adamantly as male artists, but are just not being given the same opportunities."

Why are there so many female art students, and so few female artists being exhibited? "Exactly why that is? Sexism,” says Reilly. “As far as women being encouraged to pursue their careers, they absolutely are. They are pursuing them as vehemently and as adamantly as male artists, but are just not being given the same opportunities. If you are trying to break into a market that is already predisposed to men, 70 percent to 30 in the gallery world, for instance, your chances of success are significantly less,” she concludes. “The entire system is already stacked against women artists."

But the problem isn't just about female artists having their work exhibited — it's also about women getting high-ranking jobs at galleries and museums.

Jen Mergel, a senior curator of Contemporary Art at the Museum of Fine Arts, Boston, observes that women are under-represented within the top ranks of the curatorial community. Referencing a membership survey from the The Association of Art Museum Curators, Mergel said, “If eighty percent of the members identifying are female, you can look at, say, the breakdown of title.” The association contains members who run from assistant and associate curators to full, senior, and chief curators — and the higher up the ranks you go, the more sparsely women are represented. Mergel reported that, among association members, under eight percent of women held jobs as chief curators, while "under male membership, there are over twenty two percent chief curators.”

Mergel also noted that many art institutions are considered non-profits and offer limited salaries, which can make gender-related pay gap issues even worse.

"We have a culture that kind of generally supports and prepares men for this sort of autonomy and independence and entrepreneurship, but not women."

Judith Pineiro, Executive Director of the Association of Art Museum Curators, confirms this. "Based on 2014 Association of Art Museum Curators (AAMC) membership survey," Piniero says, "the responses from those that voluntarily participated in an anonymous survey indicated that less than 10 percent of female curators were reaching a six figure salary, but that over 25 percent of male curators were reaching that benchmark.” She confirmed that these numbers still held true today.

And just this November, Artsy reported that women make $20,000 less than their male peers, a stat that remains consistent in many artistic nonprofits.

It's clear that there's a major problem in the art world — but how do we solve it? Is the answer to incorporate disruptive change? Galleries and museums are, after all, businesses.

“Contemporary curators of all genders strive to bring this work forward,” observes Mergel of the often-disregarded work by female artists. But the more business-focused parts of the art world — as an industry, not just a creative art form — continue to exclude women.

Micol Hebron, a feminist artist and activist who also teaches as an associate professor at Chapman University in Southern California, underlines the fact that an artistic career is innately an entrepreneurial one. “We have a culture that kind of generally supports and prepares men for this sort of autonomy and independence and entrepreneurship, but not women,” she says, adding that, as an artist, “you are essentially endeavoring to be an independent contractor and an entrepreneur, and you need to have a business plan...we don’t talk about business acumen enough with young women.”

A few years ago, Hebron launched a project called Gallery Tally, which visualizes the ratio of male to female representation in galleries. After repeated bad experiences with gallerists, she put her foot down and created her own avenue.

“I've stopped doing studio visits with curators and collectors because they were so misogynistic. I couldn't bear it anymore”, says Hebron. “I was treated with such disrespect, or such demeaning kind of comments or behaviors, I couldn't...I didn't want to do it. I refuse to participate in that system.” Meanwhile, Hebron’s Facebook page had been banned for an image of a male and female nipple. The double standards are quite clear.

Hebron has asked gallerists about lack of women on their rosters, and was met with answers such as women not being as aggressive when it came to promoting their work, or even lack of passion for their careers. “I don't know what gives them that impression,” Hebron laughs. “but I've heard that.” She also adds that she fears that gallerists see women as risky investments, because women may leave their careers to start a family.

These opinions are not isolated to gallery owners. In 2008 , the (now deceased) art critic Brian Sewell declared in an interview with The Independent, "Only men are capable of aesthetic greatness. Women make up 50 percent or more of classes at art school. Yet they fade away in their late 20s or 30s. Maybe it's something to do with bearing children.”

Marina Abramović has even stated that she purposely avoided having children in order to maintain her career. In a translated quote from an interview, Abramović says, “In my opinion that’s the reason why women aren’t as successful as men in the art world. There’s plenty of talented women. Why do men take over the important positions? It’s simple. Love, family, children—a woman doesn’t want to sacrifice all of that.”

Enter the elephant in the room: sexist perceptions of women, not just in artistic careers, but perhaps all of them, which create an uneven playing field for opportunity.

And that’s really what success in any field comes down to.

Women have been increasingly outnumbering men as college students, and there’s no lack of talent out there; arts careers are simply another place where women are hit with the double standard. We see it in politics, film, the music industry, engineering, and more. Society raises little boys to be rock stars with confidence that what they are doing is great, yet we constantly see women who face consequences for pursuing their careers with confidence and cunning.

Change comes more slowly to arts institutions...even while they may advocate for work that pushes at the margins."

“The presence of women, but also the amount that they’re compensated for their labor, is still radically undervalued,” says Hebron of how female professionals are perceived and given opportunities. And research shows that even in situations where we think there is an even ratio of male and female players, we're often wrong. The Geena Davis Institute has done research on how, for instance, crowd scenes in film or television tend to show only 17 percent female characters, but are perceived by viewers to have an even mix of men and women.

“We have a perception problem when it comes to women being present, and I think that this is part of it in the art world and in schools. I think that if there is 30 percent women, people perceive it to be more than 50 percent,” adds Hebron, also using the example of "all women shows’" at museums leading some to perceive that suddenly, women have as many career opportunities in the art world as men.

It’s great that these institutions are opening up the conversation and are trying to make a difference with these shows but, as Hebron points out, the language only changes, not the stats.

Add to all that the fact that the forward march of social change is both shakier and more pronounced than ever since the 2016 election. Though issues of inequality within the art world existed long before the Trump administration — and wave of extremist right-wing action it empowered — the current political climate has made problems more severe. Talk of defunding the National Endowment for the Arts puts all artists at risk. President Trump has officially signed a law which allows states to block Planned Parenthood from receiving federal family planning funds, depriving women with a resource for contraceptives, pregnancy care, and cancer screenings. Our new Secretary of Education, Betsy DeVos, has many college graduates and students (artists included) nervous about her rollback on student loan protections. All of this may let a new worry sink in: if women are historically overlooked as artists, despite their educational lead over men, what happens when funding and protection for arts, education, and women’s healthcare and bodily autonomy are shaved down?

“The threats to women's rights — basic human rights — are far greater than I ever would have imagined before November 8,” says Sheri Wills, Dean of Fine Arts at RISD. She adds that the community work and perseverance of artists in the face of the new administration is heartening, though. “I have friends who say that the current circumstances will inspire much great art. And I agree, that for a short time, this lends energy and focus. But I worry... if this goes on for too much longer.”

“We see such a gender gap in the art world, which we generally think of as progressive, because of the way that art is valued,” Wills notes. “Validation in the arts is centered in a social context, more than an economic one." So while many artists, curators, teachers, and others are pushing back against the art world's institutionalized sexism, we should not expect an improvement overnight. "In business, you can get disruptive change, such as Airbnb; social change happens incrementally," says Wills. " So, in that way, change comes more slowly to arts institutions...even while they may advocate for work that pushes at the margins.”