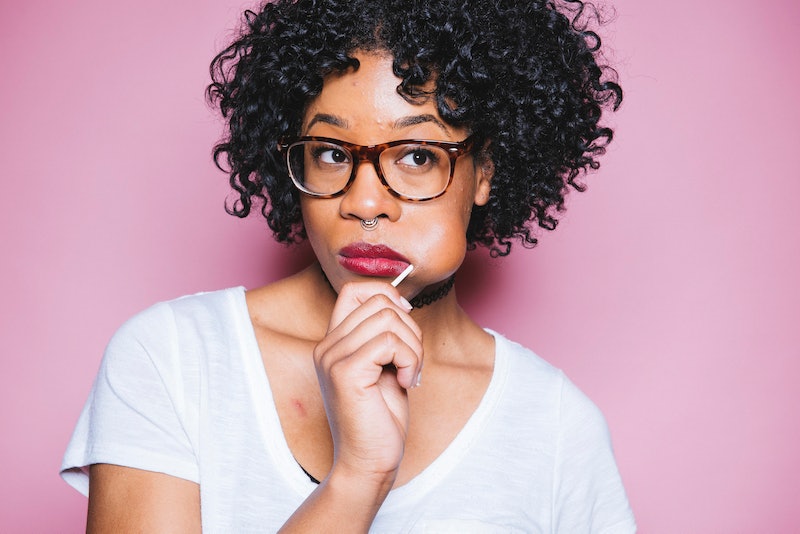 The next time somebody "not all men"s you, just forward them this and respond "literally all, says science." A new study in the journal Science Advances found that women peak at 18 on dating apps while men peak at 50. It's been making waves and fueling outrage, which like, good! It's a super gross finding! But also, let's take a closer look at the actual science.

The analysis, authored by Elizabeth Bruch and Mark Newman from the University of Michigan, took a look at heterosexual dating markets in New York, Boston, Chicago, and Seattle via a "popular, free online dating service." (A note in the paper that indicates the service gave users the option to look for non-romantic partners, like friends or activity partners) They looked at the messaging habits of 200,000 non-LGBTQ+ users searching for romantic partners over the course of a month to quantify a "hierarchy of desirability." What the study found was that people on dating apps tend to message people about 25 percent more desirable than themselves — in other words, people typically shoot their shot aspirationally. And once researchers developed what they called a "desirability score," they were able to identify what user characteristics were most desirable among men and women. Here's where things get...depressing.

When it came to age, women's desirability was at its peak the minute they signed up for the service at 18, and then sharply (surprisingly sharply, Bruch told the New York Times) declined after that through age 60. Men's desirability, however, peaked at 50 and then declined. When it came to race, Asian women and white men were considered the most desirable. And when it came to education level, well, you can probably guess. Undergraduate degrees were considered the most desirable level of education for women to have attained, while postgraduate education was actually associated with a decrease in desirability among women. The findings were controlled for age, so they weren't simply as a result of women with graduate degrees being older than women with undergraduate degrees. For men, the opposite was true; more education was always more desirable.

There is a bright side, sort of. Researchers concluded that because of the low threshold for sending a bunch of messages to a bunch of people who are hotter than you on an app, "the hierarchies of desirability may be more pronounced online than off." In other words, because what the study calls "unrequited overtures" (eg. messages) are so much more difficult to observe and record in IRL interactions, it's possible that the study's findings don't necessarily bear as much weight offline. So what this particular study found "most desirable" isn't necessarily how people are screening potential mates in real-life social settings.

What's most important to remember here is everyone is responsible for their own attraction. The onus to "change" in order to become more desirable is frequently foisted upon women when it's very clear here than men are the ones who have some soul-searching to do about what's so goddamned unsexy about a woman with a PhD.

More like this
Hinge's New NFAQ Feature Is Demystifying Queer Dating
By Emma Carey
Is It A Rebound Relationship Or The Real Thing?
By Carolyn Steber and Lexi Inks
Are Quality Time & Physical Touch Love Languages Compatible?
By Lexi Inks
The Best Time To Date After A Breakup, According To Experts
By Bustle Editors
Get Even More From Bustle — Sign Up For The Newsletter