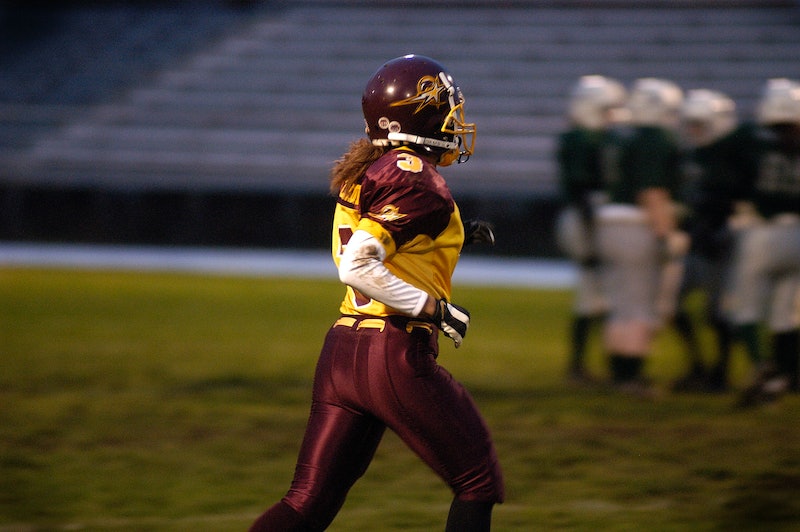 Women on the football field are driven by passion, not by money. They put on their pads and helmets and subject themselves to brutal hits because they can’t imagine doing anything else, and yet the game requires them to put their bodies on the line without any promise of monetary reward. In fact, most women who play football have to pay out of pocket for the opportunity to sacrifice themselves for the sport.

Women’s full-contact, professional football leagues are gaining visibility — and credibility. One of the two main leagues, the Women’s Football Alliance, has 68 teams that plan to play in 2019. Women’s tackle football is similar to men’s; the WFA’s rules are adapted from the National Collegiate Athletic Association rulebook. Most teams in the league practice three times a week starting in January, and the eight-game regular season runs from April to June, with a postseason through July.

According to Lisa King, the WFA's commissioner, each team runs on an average budget of $20,000 per year. Membership in the WFA costs teams between $1,000 to $2,000 per season, and that membership includes liability insurance, balls, game film so that teams can study and improve their play, and travel stipends for the playoffs and national championship. It's on the teams themselves to cover all regular-season travel.

"Most of my equipment was hand-me-downs and kids XL to save money."

To help fund the budget, players are required to pay a team fee to play. That fee varies depending on the team, but most fees range between $250 and $800. Add travel and equipment costs to that fee, and the price women pay to play gets steep. Depending on where a team is traveling to, renting a bus and hotel rooms for everyone can add up to thousands of dollars.

In an ideal world, players would focus on nothing but training. Instead, they have to worry about finding the money to play.

Each team goes about it differently. Mitchi Collette, co-owner of the Toledo Reign, says that team's players get sponsors, and they also host fundraisers. “One is called ‘Fan Shirt Club,’” she says. “We design T-shirts for friends and family, and they get $5 off their player's fee for every shirt they sell.” Players also have the option to attend events in return for money toward their team fee. For example, Reign players work the county fair, which Collette says provides "upwards of $3,000 to offset fees."

Madeleine Entwistle, a 24-year-old wide receiver who is in her first year on the D.C. Divas, says the financial strain of playing for the Philadelphia Phantomz last season caused her a lot of stress. “Most of my equipment was hand-me-downs and kids XL to save money, and I had to do payment plans with the team or push some payments to the Phantomz back,” Entwistle says.

While playing with the Phantomz, she was juggling grad school and part-time jobs to make ends meet. She's since graduated and now works in Washington, D.C. as an account manager at an IT staffing company.

Entwistle says the Divas’ financial system is more helpful for the players than some other teams’ plans. The Divas are trying something new this year, which the team’s owner, Richard Daniel, sees as a step toward the ultimate goal of being able to pay players a salary. They’ve reduced the team fee and introduced a commission opportunity, where players can get money toward their team fee based on tickets they sell or sponsors they bring in.

“It’s not salary. There’s no teams that I’m aware of that are paying players yet,” Daniel says. “But for us to make that step is the closest thing I’m aware of to doing that.”

On top of the fees, there’s also the cost of potential injuries. Injuries can derail a career, and chronic traumatic encephalopathy (CTE) is a long-term health risk for the players. Despite evidence showing that helmets actually increase brain injury risk, Collette says she’s not concerned about CTE, adding that she was “always taught that our helmets were to protect our head.” Collette was a member of the National Women’s Football League’s Toledo Troopers in the 1970s, known as the “winningest” team in professional football history.

"When you're a professional football player and you get injured, that's your job and someone's there to take care of you,” Amanda Alpert, a center for the Boston Renegades, told me when I interviewed her for espnW in 2016. “When you get injured here, it's a lot different, and a lot of people's jobs are on the line."

In the NFL, the long-term health risk is often ignored, partly because of the money involved. The average NFL salary is $2.1 million, according to Forbes, though with salary, bonuses, and endorsements, NFL players can earn much, much more. Green Bay Packers quarterback Aaron Rodgers reportedly earned upward of $75 million in 2018. As Adam Patrick wrote for The Comeback last year, "It’s the reward of millions of dollars in compensation and creating a better life for their families that continue to make the decision of playing football for a living an easily justifiable one."

Women’s football players have none of that promise. Just the desire to play the game they love.

"We all do it because it’s genuinely what we love and we really value the sport."

Not having a salary right now doesn’t necessarily mean that women’s football players will never get to the level of compensation and fame that NFL players have reached. In the 1920s and 1930s, when the NFL was in its infancy, it wasn’t profitable or paying its players, either. Women's football leagues, like the WFA, have only been around about two decades; they still have time to grow and evolve.

There are increasingly more opportunities to parlay a semi-pro career in women’s football into a paying job in the sport. Dartmouth College's football team hired former D.C. Diva Callie Brownson as an offensive quality control coach last year, making her the first female full-time coach at the Division I level. Two current Divas also coach high school boys’ football teams: Offensive lineman Rachel Worsham is at Marshall High School, and her wife, offensive lineman Becky Worsham, is at West Springfield High School. Katie Sowers, a former quarterback and general manager for the WFA’s Kansas City Titans, currently works in the NFL as an offensive assistant for the San Francisco 49ers. She's the second woman to ever hold a season-long coaching job in the league.

The Divas are going into their 19th season, which Daniel, the team owner, sees as an opportunity for the organization to progress. “We’re graduating to a different level of engagement and how players are rewarded and recognized,” he says, “and I think it’s a good step.” He believes that every small step, like the team's new pay structure that aims to reduce player costs, will eventually foster the kind of opportunities and recognition that currently exist for men in the sport. Even though that progress can feel slow at times, players say the sacrifice is worth it.

“People laugh when I tell them … what I do with my free time,” Entwistle says. “Sometimes people think I’m in a rec league, but what we do is definitely a time commitment, and we all do it because it’s genuinely what we love and we really value the sport. I’m super excited for the [eventual] goal of women being recognized as football players, not just men. We’re doing it for a cause, to empower girls and women to be able to do anything a guy can do.”