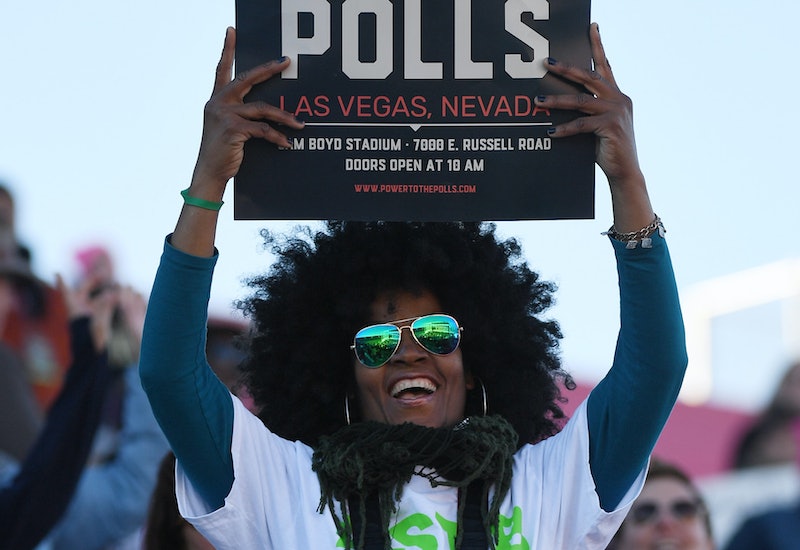 There's no doubt that more women are acting on their political ambitions than ever before in the wake of Donald Trump's election and the #MeToo movement, and that phenomenon could have a significant effect in the coming elections. At the state level, for example, Nevada could have a majority female legislature, potentially making it the first state to cross that line.

According to an analysis from the Reno Gazette Journal, there are enough women running in both the Assembly and the Senate for the statehouse to have a majority of female legislators after the midterms. It's by no means a forgone conclusion, the Gazette Journal wrote; several of the women will be running against incumbent representatives in true battleground districts. Still, it's a possibility — and the New York Times reported that it's not only Nevada where that could happen.

The Times reported that there are eight other states that could gain at least even representation for men and women, including another four besides Nevada where women could step into the majority: Maine, Colorado, Oregon, and Maryland. The states that could potentially see an even split are California, North Carolina, Illinois, and South Dakota. According to the Times, it's highly unlikely that voters would actually make these changes happen — but it's notable that it's even a possibility.

As Politico reported in March, a higher number of women than ever are running for the nation's highest elected offices. At the time of that report, at least 575 women overall had said that they were running for either the House or the Senate. This number will have gone down by now, as the primaries have filtered out candidates before the November midterms. Even at the time, though, a Bloomberg analysis suggested that increased numbers of women running wouldn't necessarily translate into more women in office. After all, more women running didn't mean that fewer men were running — and male candidates still dominate the field at this point.

In their analysis, the New York Times emphasizes that the chances are actually quite low that any of the states will reach those majorities of female representatives or those even splits, let alone that all of them will. In many cases, the women running for the first time will be facing incumbents, who always have a high probability of winning state races.

In Nevada, though, women already make up 40 percent of the state legislature, according to the Gazette Journal, and women wouldn't need to win every single race in order to claim the majority.

"Nevada already has a relatively high share of women in the state legislature," political science professor Eric Herzik told the Gazette Journal. "So no, (a female majority) wouldn't be a total surprise."

Both the Gazette Journal and the Times noted that the majority of the new female candidates are Democratic. One organization that can claim some responsibility for this is EMILY's List, which aims to encourage pro-choice women to run for office. After specifically targeting state legislatures, they could see some of their efforts pay off — and Nevada is no exception, as many of the candidates are driven further by the actions of the current Republican president.

“Donald Trump does something every day to encourage Democrats to vote this year, so that helps,” said political science professor Fred Lokken, speaking with the Gazette Journal. “So I think, especially with the (blue) wave coming, we’ll see more women in state government after November.”