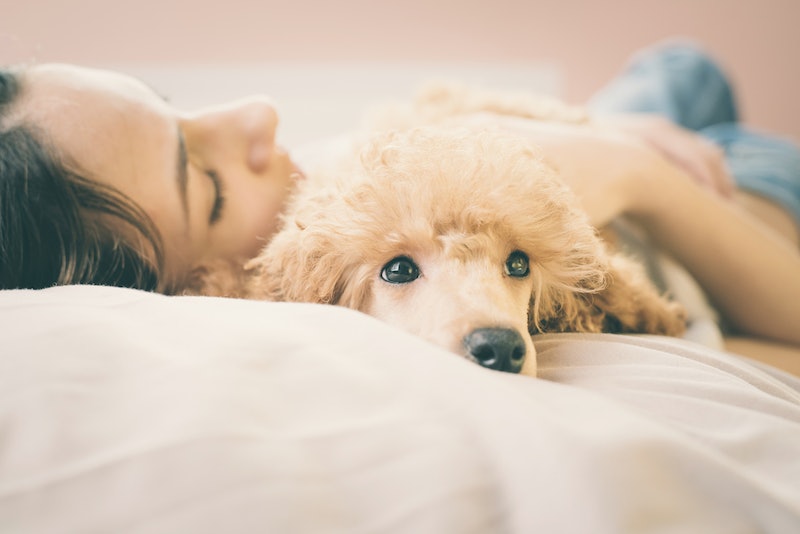 If you’re in search of a good night’s sleep, get a dog. According to a new study, women sleep better next to dogs than people or cats. No shade to cats. They just aren’t as cozy as dogs, scientifically speaking. Definitely shade to cover-stealing, loud snoring humans though.

The study you have to thank for giving you a science-based excuse for getting a pup is titled “An Examination of Adult Women’s Sleep Quality and Sleep Routines in Relation to Pet Ownership and Bedsharing.” Recently published in the journal Anthrozoös, researchers looked at how bedmates of different species (humans, dogs, and cats) affected women’s sleep. Researchers interviewed 962 women across the United States, having participants answer questions about their quality of sleep. Among those women, 57 percent shared their bed with another person, 55 percent with at least one dog, and 31 percent with at least one cat. All but 7 percent of participants lived with cats and/or dogs.

As with any other contest/scientific study that involves dogs, dogs came out as the reigning champ. Study authors found women who slept next to cats and humans were equally likely to be woken up during the night. Dogs, however, were less disruptive, proving once and for all that dogs are perfect.

Researchers believe this may have something to do with dogs’ routines. “Dog ownership and its associated responsibilities may cause individuals to adhere to a stricter routine,” study authors wrote. “Keeping to a consistent sleep schedule may be beneficial to dog owners.” Women with dogs also reported earlier bedtimes and wake times than participants who had cats but didn’t have dogs.

Because the study is based on self-reported sleep habits, researchers recognize their results have much more to do with how participants perceived their quality of sleep. Still, women appear to be way more chill about sleeping next to a dog than a human person. “Compared with human bed partners, dogs who slept in the owner’s bed were perceived to disturb sleep less and were associated with stronger feelings of comfort and security.”

People who shared a bed with cats reported “weaker feelings of comfort and security than both human and dog bed partners.” Apologies, again, to my many feline readers.

As Jezebel points out, this reaffirms a previous study by the Mayo Clinic in Arizona. Study authors conducted their research with 40 healthy adults of all genders and did not include cats. They found “all people who slept with a dog generally got better sleep.” While their conclusion also affirmed having a dog in the room was linked with better sleep, where the dog slept was key. According to their results, sleeping with a dog in the bed, rather just in the bedroom with you, could be disruptive to sleep. This will come as little surprise to anyone who has ever been awoken by a dog fart (sound or smell).

Essentially, the study authors suggest people who share a bed with their dogs could be waking up just as much as people with cats or human bedfellows. However, the women in the study were less bothered by or simply less aware of any sleeping inconveniences. Again, this will come as little surprise to anyone who’s snuggly dog doubles as an equally cozy bed pillow.