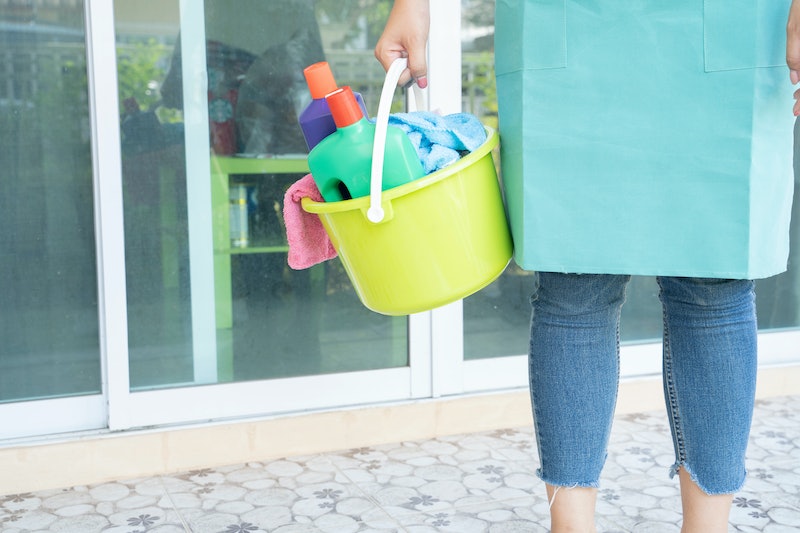 Quick question: how much time have you spent cleaning this week? If you're a woman who shares a home with a male partner, chances are you undertake the majority of the household duties, as retrograde as that might sound. According to a new study from researchers at University College London and Imperial College London, as the Independent reports, women still do most of the household chores when living with a male partner; specifically, women spend about 16 hours a week on household tasks, while men only do about six.

The researchers used data on 8513 couples comprising a woman and man who lived together, between the ages of 16 to 25, from the 2010 to 2012 wave of the national UK Household Longitudinal Study. Since they exclusively used data on couples where a woman and man cohabitated, their findings can't be applied to queer couples, or couples who don't live together.

The findings? As the Independent reports, women carried out the majority of the domestic tasks in a staggering 93 percent of the couples surveyed. Plus, when both partners worked full-time, women were five times more likely to spend 20 hours or more a week on chores. Half of the couples examined had a "relatively egalitarian division of work," according to the study authors (that's all work — including paid work and household tasks) But only two groups, comprising 7 percent of the couples, were considered "the most egalitarian": couples with a female earner who shared the domestic work, and couples in which men spent long hours on domestic work.

"The female-earner was the only group in which men’s contribution to the housework was similar to that of their partners, and this group had the highest proportion of women with educational qualifications higher than those of their partners," the researchers wrote.

The study authors concluded that in the UK, "gender equality in divisions of work is rare and gender norms remain strong." For household work to be divided equally, both partners in a couple need to share the same feminist ideals, while having a baby thrust couples back into old gender norms: "the largest egalitarian groups in this study were less likely to have children," the authors wrote. My conclusion? In a futile act that will do nothing to address gendered disparities in household work and will seriously threaten my access to clean socks, I'm not doing laundry for a month.