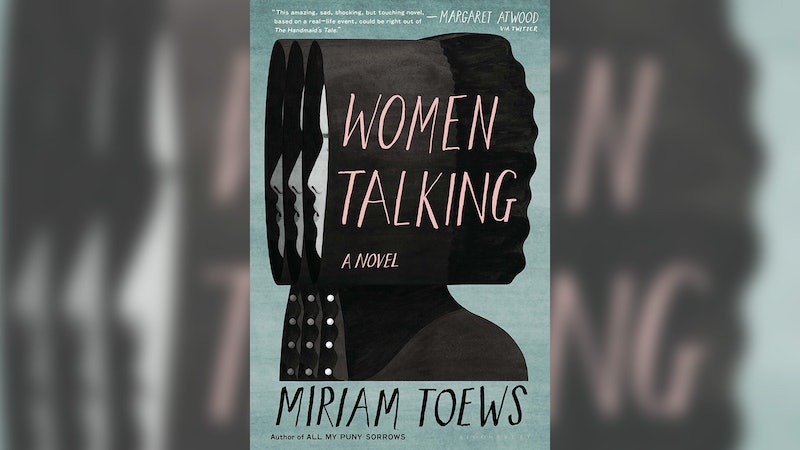 At the center of Women Talking, the latest novel from Canadian author Miriam Toews, are true events so horrifying and heartbreaking, they appear to be ripped not from the headlines but from the realm of nightmares.

Between 2005 and 2009 in a remote Mennonite colony in Bolivia, girls and women of all ages awoke in the morning, disoriented and in disbelief, to find their bodies bruised and their sheets bloodied and covered in semen. Some members of their fundamentalist community blamed the attacks on demons whom they believed had come forth to punish the women for their sins; others attributed the phenomenon to the women’s “wild female imaginations.” In reality, the perpetrators were several male colonists who were breaking into homes at night and using cattle anesthetic to drug their victims before raping them in their own beds.

...they discuss everything from their future at the colony and the ethical framework of their faith to the responsibilities they bear as mothers of daughters and very nature and purpose of forgiveness itself.

Women Talking is inspired by this brutal crime. The novel begins after the women of the town have discovered they have been raped. Their attackers have been arrested "for their own protection." (Following the revelation the women were being raped, one victim attempted to assault the guilty parties with a scythe, after which the men were moved at the behest of their leader Bishop Peters from their makeshift jail in the colony to a prison in the nearby city.) While the remaining men travel into town to bail the rapists out and return them home, the women are left behind to make a decision that will forever change their lives: Do nothing, stay and fight, or leave. "When the perpetrators return, the women of Molotschna will be given the opportunity to forgive these men, thus guaranteeing everybody's place in heaven,” Peters decrees. If not, they will be forced to leave and live in the outside world, though they do not speak the language of the country where they live, they cannot write or read, and they've never before left the community.

While most of the rape victims have chosen the first option — to do nothing but forgive their attackers and continue to live life as they have always known in their conservative patriarchal colony — there is a small group of eight women who still haven’t made up their minds. Women Talking lets readers sit in on their decision making process, to eavesdrop on the two-day secret meeting in which they discuss everything from their future at the colony and the ethical framework of their faith to the responsibilities they bear as mothers of daughters and very nature and purpose of forgiveness itself.

“But is forgiveness that is coerced true forgiveness?,” asks Ona Friesen, one of the leaders of this small resistance. “And isn’t the lie of pretending to forgive with words but not with one’s heart a more grievous sin than to simply not forgive? Can’t there be a category of forgiveness that is up to God alone, a category that includes the perpetration of violence upon one’s children, an act so impossible for a parent to forgive that God, in His wisdom, would take exclusively upon Himself the responsibility of such forgiveness?”

What if instead of choosing the options handed down to them by the men in their community, Ona wonders, the women chose a different path, not just for themselves, but for all of Molotschna?

As the title implies, Women Talking is focused on just that — the conversations women can have with each other when men are away and otherwise unable to stifle or silence their voices. It may come as a surprise, then, to learn the novel is actually narrated by a man, August Epp. An ostracized school teacher whose family was once exiled from Molotschna for reasons revealed later in the novel, August is asked by Ona to take minutes at their meetings since the women of the colony do not know how to read or write. It is through him that Toews is able to infuse her dark and often devastating novel with humor, light, and glimpses of hope. His devoted service to these women, his willingness to help them navigate their impossible situation by recording and not correcting their rage, serves as a kind of model for readers to follow: Be quiet, listen, bear witness the reality of women's suffering, and share their truth.

But what exactly is the truth for the women at the center of the novel? And what good is sharing their story if it is one destined to repeat itself? The choice between forgiveness and fighting isn't the only one the women of Molotschna are considering — at least, not all of them. There is also talk of anger, rage, and retaliation, of faith, religion, and ethics, of the possibility of change, the reclamation of power, and the need for real action. What if instead of choosing the options handed down to them by the men in their community, Ona wonders, the women chose a different path, not just for themselves, but for all of Molotschna?

Her rebellious thoughts and her wishful thinking is shot down time and time again by the women that surround her, and doubted by August as well, but it doesn't stop Ona from dreaming of something different. “We are women without a voice," Ona tells not just group of women at her meeting, but the unseen reader holding her story in their hands. "We are women out of time and place, without even the language of the country we reside in. We are Mennonites without a homeland, We have nothing to return to, and even the animals of Molotschna are safer in their homes than we women are. All we women have are our dreams — so of course we are dreamers.”

A remarkable novel about the messy intersection of faith, pain, power, and forgiveness, Women Talking gives a booming voice to female pain and rage, one that can't be ignored and won't easily be forgotten.