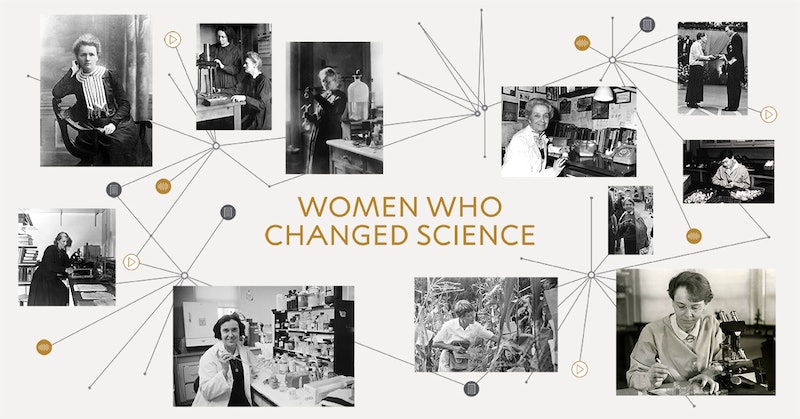 Courtesy of Microsoft and Nobel Media
By JR Thorpe
March 8, 2019

Women's History Month is a great time to continually be inspired by the countless brilliant women who've come before us. While there's a lot of visibility for movers and shakers across all industries, a new AI-powered tool is specifically focused on uplifting the stories of women in science, technology, engineering, and math (STEM). Microsoft and Nobel Media have partnered to launch Women Who Changed Science, a storytelling platform that seeks to highlight some of the female scientists who altered the way we understand our world. Through the tool, you can take behind-the-scenes journeys into the stories of the Nobel Prize-winning luminaries who changed the course of history, and you can experience what it really means to be a boundary-breaking woman in science.

"Microsoft and Nobel Media have a shared mission to encourage more women and girls to pursue careers in STEM," Amy Sorokas, Microsoft Director of Brand Partnerships, tells Bustle. "And we know from our research that one of the key drivers is helping girls find relatable role models in STEM. By using the latest technology, Nobel can tell stories in ways that create a stronger connection with laureates. We can share their personal stories of grit and perseverance in a way that makes brings the stories of laureates to life and, hopefully, inspires more young women to get involved in STEM.”

Navigating the site can go one of two ways. You can select a Nobel laureate for yourself, or use a quiz about your passions and the people who inspire you to find a "match." Some of the names might be familiar, but others will be less so. Alongside scientists like Marie Curie (the first woman to win a Nobel Prize and still the only woman to have won twice), you can also walk through the lives of Barbara McClintock, who won the Nobel for Physiology or Medicine in 1983 for her work on genetic maps, or Tu Youyou, who created a breakthrough malaria treatment and won the Nobel for Chemistry in 2015.

The site features all 19 female Nobel-winning scientists, and their achievements are presented alongside their own words and personal photographs detailing their journeys. Gertrude B. Elion, who won the Nobel for Physiology or Medicine in 1988 for her cancer research, declared, "In my day I was told women didn’t go into chemistry. I saw no reason why we couldn’t."

The end result is meant to be inspiring to future generations.

Childhood photos of female scientists, pictures of their scribbled notebook pages as they put in decades of passionate research, letters from the people they've helped: it all adds up to a very powerful series that doesn't shy away from describing the sexism they faced, the challenges of motherhood and relationships, or the reality of failure.

"I was described as a dreamer, a fantasist, even as the village idiot. I didn't care. What I cared about was convincing people to allow me to go on with my work," wrote Ada Yonath, who won the Nobel Prize for Chemistry in 2009 for mapping the ribosome. For young women who can't 'see' what being a woman in STEM looks like, this is a scintillating insight.

The scientific Nobel Prizes have attracted a lot of attention for their recognition of women. In 2018, professor Donna Strickland shared the Nobel Prize for Physics, becoming the first female winner of the prize in 55 years, while Frances H. Arnold shared the 2018 Nobel Prize for Chemistry for her work on enzymes, only the fifth female winner in the history of the prize. These statistics matter. There's still a lot of sexism in the STEM world, and every time a woman wins one of the most famous scientific prizes worldwide, it's another strike for gender equality.

Losing yourself in the history of truly astonishing scientists is a great way to spend your Women's History Month. The experience of Women Who Changed Science is about both individual stories, with their details of struggle and crushing odds, and a bigger context. It shows how the achievements of individual women over generations have woven together over time to create a better world. Get ready for a deep dive into the lives of some of science's most important women.