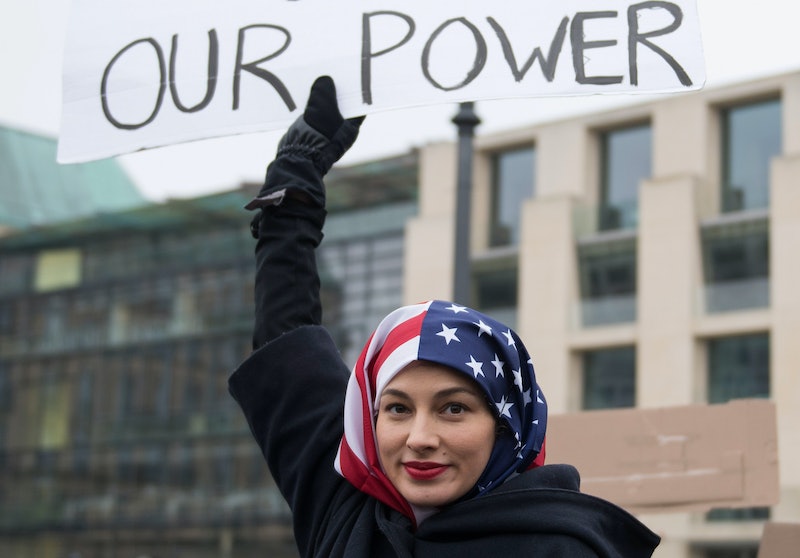 Hundreds of thousands of marchers descended onto Washington, D.C. on Saturday for the 2017 Women's March on Washington — a demonstration challenging President Donald Trump and his administration's grossly anti-women policies. Longtime feminist activists such as Gloria Steinem and Ashley Judd were scheduled to speak at Saturday's historic march, which attracted women and men from all across America. Sister marches were also scheduled to take place not only in America, but also across the globe, including Paris, London, Tokyo and even Antartica. If you can't make it to one of the hundreds of marches today, there's women's march memes and tributes you can share online.

On Saturday, the Washington, D.C. subway stations were flooded with demonstrators clad in pink "pussy" hats. Meanwhile, the streets of the D.C. were filled with marchers waving signs like, "Pussies grab back," "Don't touch my cuntry" or, my favorite, "Now you've pissed off grandma."

Although millions across the globe have taken to the streets, there's still ways to participate in the historic women's march without leaving your home. You can share some of this women's march memes and tributes on Twitter and Facebook to show your feminist support and stand in solidarity with those marching today.

The Most Badass Women Still Protesting

Judd, meanwhile, got the crowd riled up when she talked about being a nasty woman — a reference to Trump's derogatory slur against Hillary Clinton during the third presidential debate. "I'm a nasty woman. I'm not as nasty as a man who looks like he bathes in Cheeto dust," Judd said. "I'm not as nasty as racism, fraud, conflict of interest, homophobia, sexual assault, white supremacy, misogyny, ignorance."

Although the final attendance tally isn't in yet, the Women's March on Washington appeared to be a success on Saturday. The Washington, D.C. metro confirmed that there were more metro rides on Saturday morning than there were the day before — Inauguration Day.

Let this be another reminder to Trump that not only did he lose the popular vote, but he also lost the nasty women — and they're not backing down.

More like this
The Lionesses Are Calling For Equal Access To Football In Schools
By Sophie McEvoy
'The Capture' Is Finally Back – & S2 Looks Tense AF
By Sophie McEvoy and El Hunt
In Rap Sh!t, Social Media Has Main Character Energy
By Aramide Tinubu
Gemma Collins' Net Worth Is Only Going Up
By Catharina Cheung
Get Even More From Bustle — Sign Up For The Newsletter