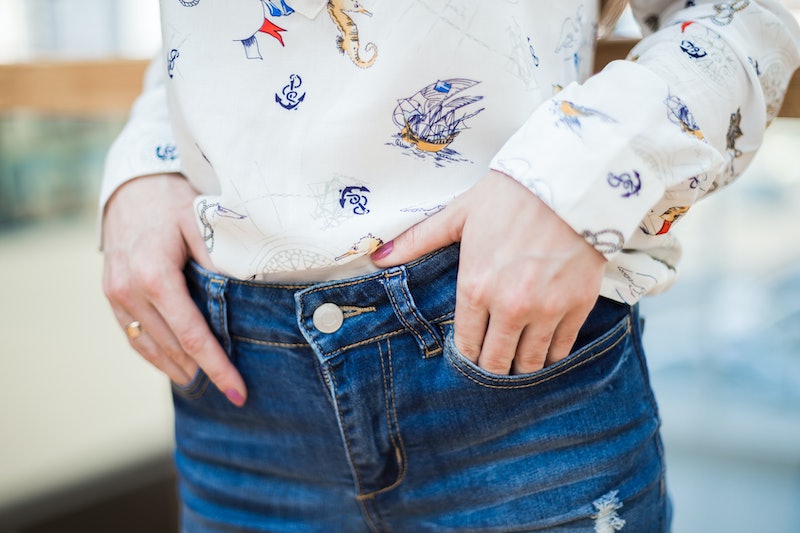 Jean shopping is rarely a fun time for women. But if you manage to find a pair that actually fits, and doesn't require you to do three pirouettes and sacrifice a goat to do them up, you still need to contend with another element of their design: the pockets. Women who wear jeans have always had to deal with the fact that those pockets carry nothing, aside from perhaps a single key and maybe a lipgloss, if the tube of small. And now a scientific analysis of 20 major jean brands has revealed that we're not imagining it; the size of women's jean pockets is far smaller than men's.

The analysis, published at The Pudding, revealed that on average, women's front jean pockets are 48 percent shorter and 6.5 percent narrower than men's. If you want to see how your favorite brand stacks up, they've diagrammed the pocket dimensions for women's and men's jeans in every brand. The biggest front pockets for women are found in Abercrombie, American Eagle, and skinny H&M jeans, but they're still comparatively far smaller than the equivalent pockets in the men's jeans.

Back pockets, by contrast, were about the same; women's skinny jean back pockets were on average only 5 percent shorter and 2 percent narrower than men's. And all these jeans were measured for the exact same waistband size; they're meant for the same size person, according to the analysis' methodology.

This is a ridiculous situation, and it's got a lot of precedent in history. Pockets have historically indicated independence and the ability to carry one's own money and property — something that, at various points in European history, was delegated to a woman's husband or father, according to the BBC. We know from historians that men in the 16th century had pockets in their gowns and hose, and that Queen Elizabeth I had pockets sewn into a lot of her clothing. However, changing fashions meant that women's pockets migrated outside their bodies, into handy bags and, in the 18th century, belts that had everything necessary hanging off them. They were called chatelaines, could hold everything from scissors to money, and I for one kind of want to bring them back.

Pockets never really returned to women's clothing in earnest. Racked reports that Charlotte P. Gilman wrote in The New York Times as early as 1905 that "One supremacy there is in men’s clothing… its adaptation to pockets. Women have from time to time carried bags, sometimes sewn in, sometimes tied on, sometimes brandished in the hand, but a bag is not a pocket." And jeans themselves originally only had a single back pocket and a "watch pocket" for one's pocket watch when they were produced by Levi Strauss in the 1870s.

The amount of women who will answer a compliment about their clothing with, "Thank you! It has pockets!" reveals how intensely practical a pocket is, and how comparatively rare it still is in women's garments. But if you were thinking that you'd just happened to pick a tiny-pocket jean by accident, you're wrong: Based on these results, nearly all women have to deal with tiny-pocket madness when they haul on their jeans. It's enough to make you give up and don overalls.