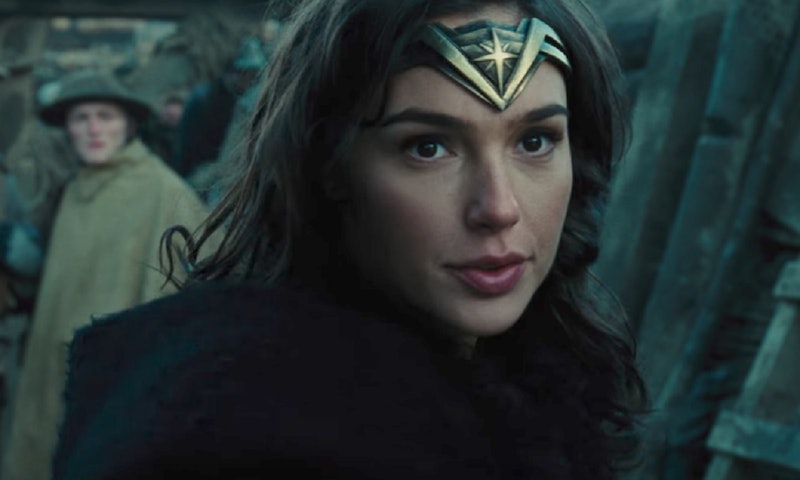 If seeing the movie made you feel hyped, then prepare to feel even more so when you find out about Wonder Woman's latest box office record. Proving that neither female superheroes nor female directors like Patty Jenkins should be underestimated, The Hollywood Reporter reported that Wonder Woman is maintaining the best box office success of any superhero in the past 15 years within North America. Now entering its seventh week in theaters, the movie has reportedly managed to gross $371.3 million through Tuesday, and apparently is assured to reach $390 million or more domestically by the time it leaves. That means that Wonder Woman will become the eighth-most successful comic book adaptation of all time, which is an accomplishment that shouldn't be dismissed.

It feels like Wonder Woman will play all the way through August. Right now, the movie is still in about 3,000 locations. Usually, the theater count would be a fraction of that at this point.

In addition to making women cry during fight scenes, earning glowing reviews from fans and critics alike, and inspiring little girls and women of all ages to believe in their own capacity for greatness, Wonder Woman now also has the box office credentials to back up its wonder. Not only that, but it could feasibly have a tremendous impact on the future of Hollywood and the women who work in it.

It's worth remembering, after all, that there were concerns leading up to the release of Wonder Woman that it wasn't going to be super successful. In 2016, for example, doubts began circulating online after an open letter supposedly written by a Warner Bros. employee described the movie as a "mess," which prompted Jenkins to shut down the rumors on Twitter immediately. She called the story "entirely false" and said it was made up by someone trying to "spread some serious misinfo."

Then, there was the unfair manner in which Jenkins was being underestimated. One critic from The National Review said that, "Jenkins is not an action director; clearly, she was hired only as a politically correct token," while a profile for The Hollywood Reporter described the director as being "a big gamble for Warner Bros."

Regardless of whether that was ever a legitimate gamble, or just the opinion spread on the internet, it's clear that the movie proved any skeptics wrong. Sometimes the best way to respond to people who doubt a woman's abilities, even a superhero like Wonder Woman, is by simply being a huge success. And that's exactly what the film has done, because the proof is right there in the figures: Women can do this, and people want to see more from them.

Whether or not these box office records are enough to provide new, exciting opportunities for female filmmakers and more female-led stories in mainstream blockbuster movies has yet to be seen. But, at the very least, these milestones remove the excuse any movie studio may make to not support female superheroes or directors, based on their supposed inability to rack up some serious bank. Because Wonder Woman has utterly smashed all expectations.