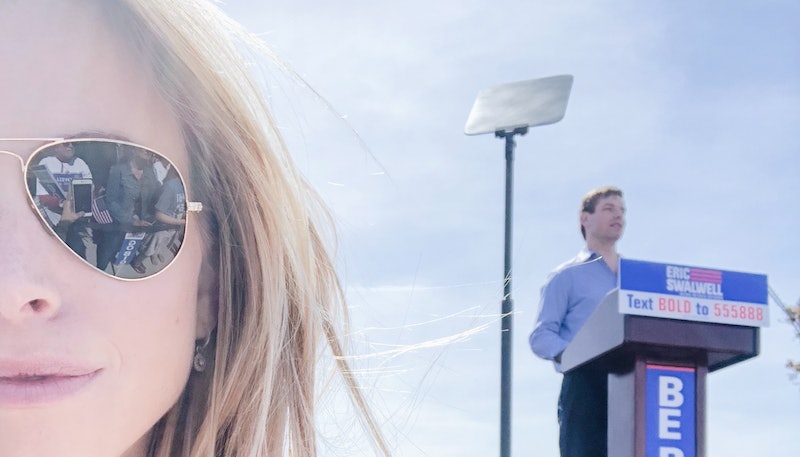 In this op-ed, Hannah Cranston, the former director of digital strategy for California Rep. Eric Swalwell, lays out what she learned from working on a 2020 presidential campaign having no prior political experience.

Sen. Kamala Harris had just walked off the stage at the California Democratic Convention. I was being pushed left and right by candidate devotees, who were screaming chants in support of Sen. Elizabeth Warren, Sen. Bernie Sanders, and Mayor Pete Buttigieg as I ushered my boss into the hall, making our way backstage before his speech. As I flashed my "All Access" badge at the security guard to join Sen. Kirsten Gillibrand, Sen. Cory Booker, and former Gov. John Hickenlooper backstage, I tried to take a second to recognize the gravity of where I was and who I was with. But before I could appreciate the moment, we were whisked to our green room as Sen. Amy Klobuchar came to greet our campaign.

How the flying filibuster did I get here?! How did I, a TV host, wannabe Instagram influencer, and former YouTuber, become the director of digital strategy for a California congressman who was vying for the most powerful seat in the world?

I had never run digital strategy, never worked on a campaign, and honestly still hadn’t come to terms with our current political climate. But there I was, a senior staffer on Rep. Eric Swalwell’s presidential campaign.

I met the congressman three years ago while I was speaking on a panel about the importance of having a digital presence to inspire younger generations to vote. After the panel, I was feeling bold, and probably over-caffeinated, and decided to give Swalwell some (unsolicited) advice about his social media. He responded by inviting me to Washington to speak to Democratic members of Congress about effective outreach to millennials. This would not be the last time I learned the power of speaking up and — more importantly — doing so even when it’s not your “turn.”

Five months ago, Swalwell's campaign called me and informed me they wanted some (solicited) advice this time. They said that the congressman would most likely be running for president and that they'd like me to run his social media for the campaign. My initial, internal reaction was, "WTF?! WHY ME?! I don't know how to do that job!," but I kept my cool and told them I'd think it over.

Working in the small inner circle of a presidential campaign was a once-in-a-lifetime opportunity, but I was terrified and unsure if it was my turn to take on such a huge role. After a week of making pros and cons lists and constantly feeling like I was going to puke, I decided to say "yes."

All of the fears I had about what this job would entail and how much I would have to learn could not compare to the reality of what the next few months looked like for me. Fifteen-hour days were the norm off-the-road, and I logged multiple 22-hour work days on the campaign trail. Under-eye concealer became my best friend. Starbucks grab-and-go menu items and one very questionable tuna sandwich in rural New Hampshire was all I ate. That was a real shit show, pun intended. Mitigating Twitter wars waged by Donald Trump, Jr. and other conservative accounts with troll armies not only became a daily practice, but also a nightly nightmare that would wake me up in a panicked sweat.

These moments reminded me yet again of the power of speaking up and making your seat at the table.

Yet, when I felt completely beat down by the news of the day, or lack of sleep, or too many airport cheese boxes, or missing my dog and my boyfriend, something would happen and remind me that it was all worth it. There was the time Swalwell visited the Chicago neighborhood of Englewood to meet with activists working to end gun violence. Tamar Manasseh, founder of Mothers Against Senseless Killings, spoke up in a roundtable and told him, "I just can't believe you're here. I can't believe you care enough to come down here from Washington." Then there was the time when my team created a campaign video chronicling the history of the fight for women’s rights that featured the congressman's wife, Brittany, who declared that she refuses to be silent.

Within my first week, Swalwell's Twitter following skyrocketed and through my tenure, his account consistently boasted the highest interaction rate of any candidate, including President Trump, according to data from CrowdTangle. By all traditional measures, I was completely unequipped for this role, and yet, the very things that I was "inexperienced" at in the political world made me better at my job. What may have made me underqualified actually meant I was untethered to "how it has always been done." I brought a new perspective and approach to the table and was never shy about voicing my ideas.

Yes, Swalwell ultimately exited the race. Yes, this job was the hardest thing I've ever done, and I probably made a lot of mistakes along the way. But, the biggest lesson I learned throughout this roller coaster was that, if you don’t speak up when that little voice inside you is telling you to say or do something, you’ll always be stuck on the sidelines. I left the sidelines and jumped into the arena only to learn the true meaning of blood, sweat, and tears.

And you know what? I’d do it all over again.

More like this
On 'Industry,' Marisa Abela Takes Control
By Morgan Leigh Davies
Naomi Osaka & Emma Raducanu’s Experiences Have Inspired A New Amazon Show
By El Hunt
We’ve All Had Bad Sex. Nona Willis Aronowitz Is Talking About It.
By Sophia Benoit
It’s Official: 'The Bachelorette' Is No Longer A Fairy Tale
By Samantha Allen
Get Even More From Bustle — Sign Up For The Newsletter