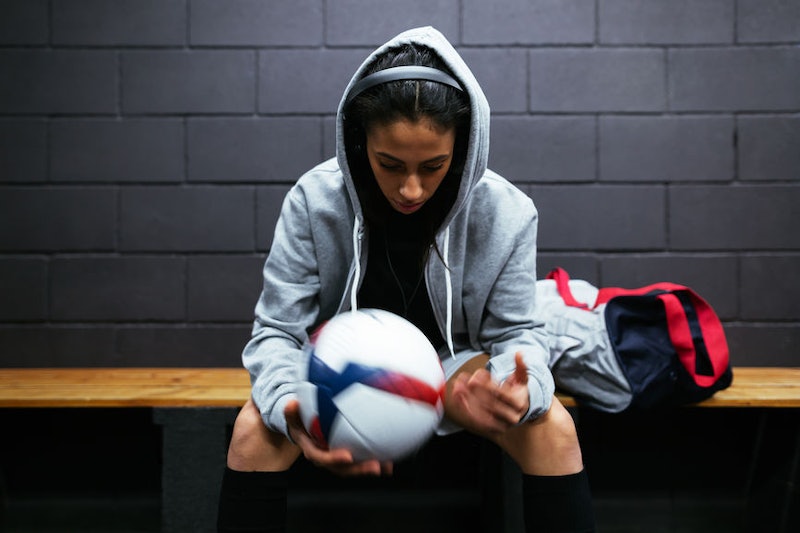 There are posts doing the rounds on Twitter at the moment accusing girls of jumping on the World Cup bandwagon. Apparently, women thought England's Marcus Rashford was a disease until last week... Huh? Erm, OK then. Disappointingly, this of course is just the latest in a sorry show of World Cup sexism in 2018.

Unless you've been living on a different planet for the last week or so, you'll probably have heard about the huge backlash against female pundits. It turns out, some people think women shouldn't comment on men playing sport. One argument for this is that women's voices are too "high-pitched" for football commentary.

Both of these points make total sense, of course, because we don't allow men to comment on women's sports at all do we? And if they were allowed they would be highly professional at all times and never make derogatory comments about female sports players' appearances, abilities, or achievements, wouldn't they? Oh, wait...

Hands up if your double standard claxon is playing at full volume right about now? Good, me too. In all seriousness, the Football Association has a history of not being particularly welcoming towards women. Despite early women's matches being attended in almost equal numbers to men's, women were discouraged from playing by the FA, who declared it "unsuitable for females."

I'd love for this attitude to sound archaic, but a quick search on Twitter will find you plenty of similar opinions from like, right now. Given its sexist history, perhaps it shouldn't be surprising that football is taking an agonisingly long time to change its ways. Women's football matches are still not given anywhere near equal billing, even though they attract huge audiences when they are shown. It was only last month that Chelsea Football Club changed the name of its women's team from "Ladies" to "Women", and even then striker Fran Kirby admitted she'd still like to see the men's name changed to Chelsea Football Club Men's so that both sides are equal.

Sexist assumptions are still made about women's ability to participate in and support football. Suggestions that fair-weather fans or band-wagon jumpers are female get me riled up. What I've always enjoyed about events like the World Cup, the Euros, and the Olympics are their ability to bring the nation together. So call me a fair-weather fan if you want, but don't bring my gender into it.

I am personally not interested in league football, and yeah, I can see why that might hack some people off. But the idea that you are only a true fan if you have always enjoyed it is clearly ridiculous. That would mean anyone who gets excited about Team GB's velodrome magic when the Olympics comes around better have been following track cycling since day dot. Or that anyone who's loving this heatwave weather better have been born sporting tiny sunglasses and a hand-held fan and sat in a paddling pool saying "ahh, this is the life" ever since.

Three Lions was my favourite song when I was five, but it really shouldn't matter if it only entered my consciousness five days ago. What I love about the World Cup is the national misty-eyed look into the distance, the mumble of "this could be our year" into your pub beverage of choice, the shouting in the streets, the screenings at school when I was kid, picnics on the floor in front of the telly using the red and white checked blanket where mum always got the good crisps because it was the World Cup.

For lots of people, the tournament isn't about pretending to be clued up on a sport they are oblivious to the rest of the time. It's about that inexplicable feeling in the air, that tiny sliver of hope, the shared elation, the shared disappointment. Denying anyone the chance to jump on a joyful bandwagon is nasty enough, but when the bandwagon jumpers are considered to be worse because of their gender? Well, that's sexism pure and simple.

Unfortunately, for a certain subset of football fans, England's World Cup winning abilities aren't the only thing they'd like to see brought back from the 1960s. I dunno about Rashford, but this sexist nonsense is enough to bring me out in hives. Have I got that right? Rashford is a type of disease, yeah? Yeah.