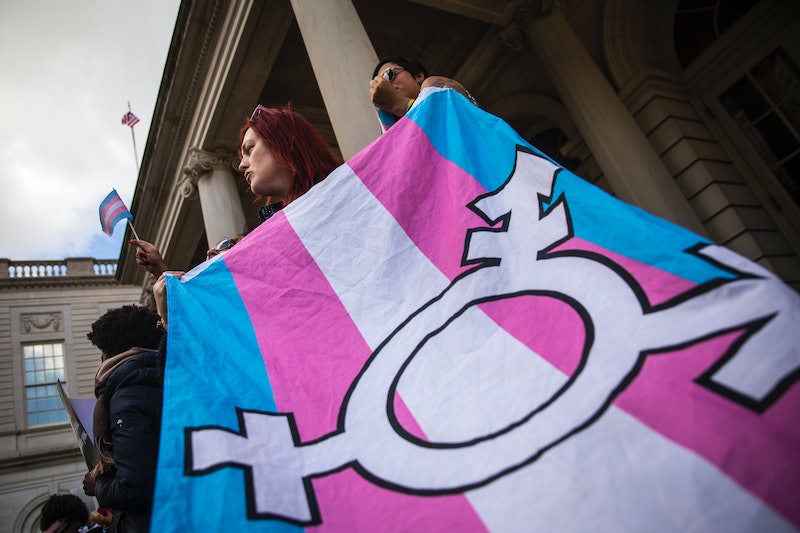 In many countries, a transgender person wishing to undergo a transition has to first be classified as having a "gender identity disorder," a step that makes the process even more difficult than it already is. That could begin changing, though, because the United Nation's public health branch just made a long awaited change in its guidelines. The World Health Organization guidelines on transgender identities just got a major update, and they no longer classify trans people as having a "mental disorder." As Time reported, though, there's still a lot of work to be done for full transgender rights.

“When you have a system that sets up someone’s very existence and identity in a diagnosis as a mental health condition, that feeds an enormous amount of stigma and drives people away,” LGBT rights researcher Kyle Knight, of Human Rights Watch (HRW), told Time. "People don’t feel like their gender identity is something diagnosable or needs a diagnosis.”

According to HRW, this change will have a noticeable difference in the lives of transgender people around the world.

“Governments should swiftly reform national medical systems and laws that require this now officially outdated diagnosis," Reid added. HRW explained that while the WHO doesn't issue mandates on things like this, health providers around the world use their International Classification of Diseases guidelines in order to diagnose patients.

The fight to get transgender rights legally and culturally recognized has been a long and fraught one, as HRW documented. Many countries around the world still force transgender people to undergo invasive psychological testing, medical testing, and even forced sterilization before they're allowed to have their true gender recognized on their legal documents. When they have the wrong identity listed on their documentation, then, this can lead to further discrimination.

"When I go for an interview, if the interviewer is male, the first thing he asks me is, ‘Are your breasts real? When did you decide to change?’ I explain I’m a transsexual woman," a Malaysian transgender woman told HRW. "It’s nothing relevant to the job….. And then they tell you they’ll call you in two weeks, but you don’t get any phone calls."

This change is coming long after the medical and psychological community came to a consensus that experiencing a gender identity different than the one assigned to you at birth is not a disorder, but rather a completely natural variation within the wide range of human identities, as Instinct wrote.

“Transgender people are fighting stigma and discrimination that can be traced in part to medical systems that have historically diagnosed expressions of gender non-conformity as a mental pathology," Reid, of HRW, told QN. “But it’s the stigma, discrimination, and bullying – and not anything inherent in gender nonconformity – that can inflict mental health problems in transgender people.”

The WHO's change in their guidelines doesn't automatically make transgender people's transitions easier, but it certainly could pave the way. Now it's just on the governments in question to give their transgender citizens the right to fully inhabit their own identities without intrusion from the state.