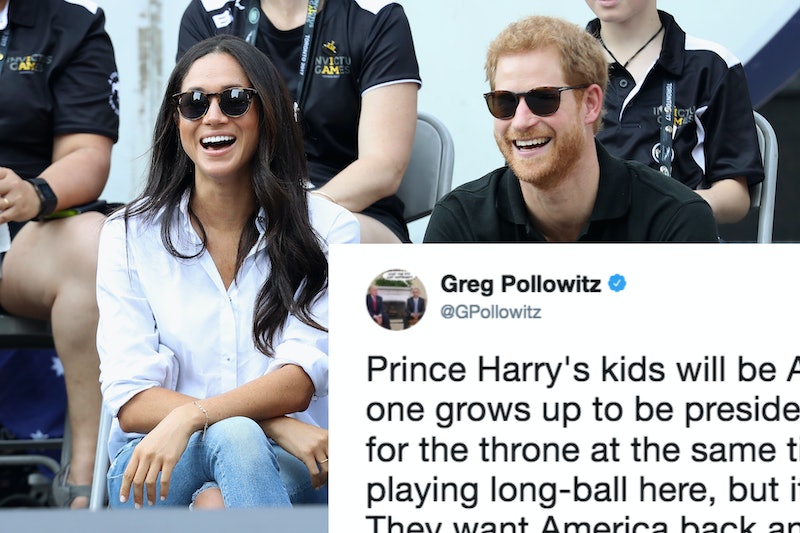 Even if you couldn't care less about the royal family, it would have been impossible to miss the news that yet another British prince plans to marry to a tall, beautiful brunette. The youngest of Princess Diana's two children, Prince Harry, announced his engagement to actress Meghan Markle early Monday morning, thereby dashing the royal hopes of Anglophiles everywhere. That's right; one of the world's most eligible bachelors is no longer eligible. When he gets married in the spring, he won't even be a bachelor. Naturally, the American public has questions. How did he propose? What kind of dress will Markle don for the occasion? Will Prince Harry and Markle's children be American citizens?

If that last question comes out of nowhere for you, allow me to explain. Born in Los Angeles, Markle is an American citizen. While it's not the first time someone from across the pond has become involved with European royalty — in 1936, King Edward VIII famously abdicated the throne to marry Wallis Simpson, an American divorcee — TIME points out that when the pair gets married next year, Markle may become the first American to be given the title of Her Royal Highness.

For regular people, marrying a UK citizen doesn't automatically grant citizenship, nor does it negate their own nationality. In other words, an American stays American even after they marry a British citizen, unless they apply for citizenship. So it's possible that if the future royal couple decided to have a truly international family, their kids could wind up with dual citizenship, making them both American and British citizens.

This has not been lost on Twitter. Not long after news of the engagement broke, Twitchy editor Greg Pollowitz tweeted a very important question. "Prince Harry's kids will be Americans. What if one grows up to be president and is in line for the throne at the same time?" he wrote.

He proceeded to answer his own question, speculating that it's all part of a diabolical plan to take back the colonies. "Brits are playing long-ball here, but it's a smart move," he concluded. "They want America back and this is how they'll do it."

Mind. Blown. Is it possible that Prince Harry's whirlwind romance has all been a long con on the road to acquiring their unruly former territory? Probably not, but Twitter had a field day imagining the possibilities.

More than one person pointed out that it's a House of Cards/The Crown crossover waiting to happen, but I say pish posh. This is the kind of story that deserves its own standalone series (with a cameo from Robin Wright, of course).

Who knows? Queen Elizabeth is a smart lady. She might have been planning for this all along.

Honestly, it might not be a terrible plan. Now that the UK has decided to leave the European Union, the royal family may be desperately searching for a Plan B.

One user even came up with the perfect campaign slogan for the royal president: Make American Great Britain Again. Someone has to print that up on a T-shirt, stat.

Of course, not everyone wanted to indulge in the fun. Plenty of people pointed out that presidential candidates must be "natural-born citizens" of the United States, which some take to mean "born on U.S. soil." (That's the reasoning the birther movement used to justify questioning Barack Obama's presidential qualifications.) If the baby is born in the UK, which seems likely given that Prince Harry is literal royalty there, he may face resistance upon running for president.

One user cast a bit of rain on everyone's parade when she pointed out that Markle will probably just take UK citizenship.

In the end, I suppose we'll just have to wait and see what happens. But honestly, given the state of American politics lately, maybe we could use a little help from our big sister on the other side of the Atlantic.

More like this
Pret & Costa’s Coffee Is The Strongest On The High Street, According To Which?
By Sam Ramsden
Ashamed Of Your Screen Time Stats? Here's How To Change That
By Alexis Morillo
Learning To Love, Not Judge, The Lunchbox Wives Of TikTok
By Esther Zuckerman
I Spent 2 Years Trying TikTok’s Dating Advice
By Kailynn Johnson
Get Even More From Bustle — Sign Up For The Newsletter
From hair trends to relationship advice, our daily newsletter has everything you need to sound like a person who’s on TikTok, even if you aren’t.