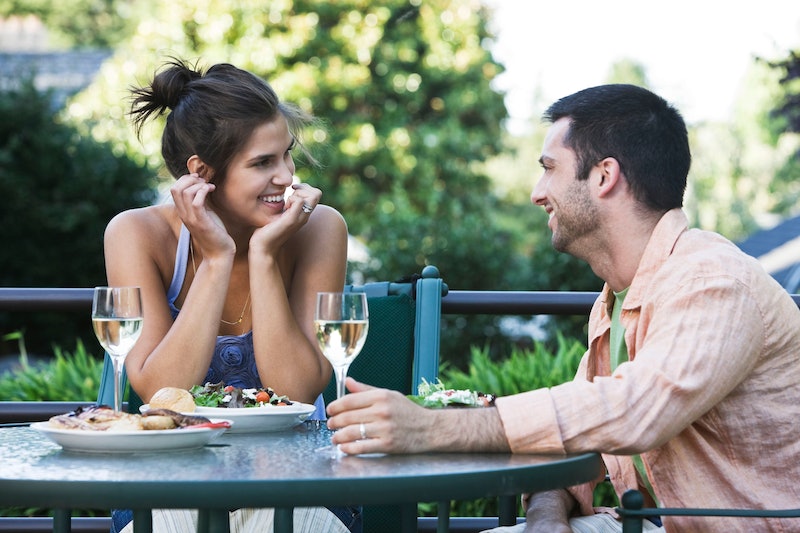 It sparked a national debate on last year's Love Island when Camilla Thurlow said she preferred to split the bill on first dates due to her feminist principles. And while paying on the first date might not seem like the most pressing of feminist issues, it is an important marker of how modern women view their power and agency in romantic scenarios.

So a new study from Badoo that suggests young British women prefer to pay for the first date, makes for encouraging reading, with 65 percent of those surveyed saying they like to be the one to pick up the tab. And it's not just paying where women are happy to take the lead. The poll also found that 74 percent of British women who use the dating app are making the first move with their matches and initiating conversations.

In a statement, Badoo psychologist and dating expert Claire Stott, explained that she believes growing confidence among women could be the reason behind the findings.

"Confidence is one of the most attractive qualities in a prospective partner. Women that take initiative and pay for dates exude self-confidence. Equally, men who are confident should find no issue in women who take control in this way. This reinforces each gender's actions; only unconfident men would see it as a threat.”

Stott also added that traditional expectations that men should pay could put them under unfair financial pressure, especially as dating is more common than it used to be, and women aren't willing to take advantage. “Dating apps mean that people are dating way more than they used to," she said. "For men to adhere to the traditional (and outdated) view of paying for and initiating dates all the time, they are likely to face emotional — and financial — burnout. Modern women are aware of this and for the most part, don’t want to take advantage.”

The traditional expectation that men should pay for dates existed because women used to be dependent on their family for money. It persisted once women were able to earn their own money, because men generally continued to earn larger salaries for the same roles as women and were more likely to secure better-paid senior leadership positions.

However, the pay gap is still alive and kicking. And as the study also discovered, dates are an expensive affair for those surveyed. On average British women are paying over £160 for the date itself and their preparations in the build up to it, including a buying new outfit and makeup, and having their hair and nails done. So what does it say that, according to this study at least, women are feeling financially secure enough and personally confident enough to pay for the first date, pay gap or no pay gap? By footing the bill on first dates could women also be sending out the message that they're done with traditional roles within straight dating scenarios?

Let's hope so, because the expectation that women shouldn't show agency within dating scenarios is seriously outdated. I'm all for greater choice in dating scenarios. If your date earns more than you and you think it's fair they pay, great. If you feel like you'd like to pick up the tab because you did the asking, you go for it. And if you feel like you want to go 50:50 to reflect equality between the sexes, then good on you.

But men and women both lose out when restrictive and outdated gender roles dictate how we should behave. First dates are about showing someone what you're all about, so when it comes to sorting the bill, do what feels right for you, not what you're expected to.