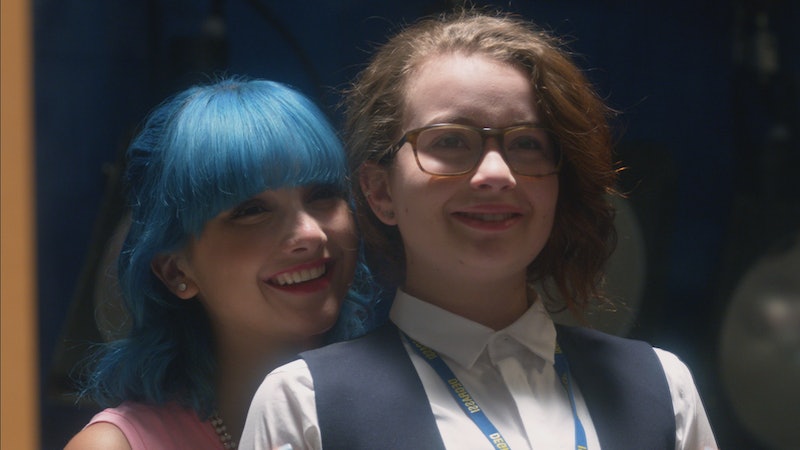 Degrassi has been airing in some form since 1986, and still manages to strike the perfect balance between juicy teen drama and educational programming that pushes the boundaries of representation on screen in the best way. The latest batch of episodes on Netflix are no different, including one storyline that brings a character into the spotlight who has been hiding in the background until now. There are spoilers for Degrassi: Next Class ahead. In Season 4, Yael identifies as gender fluid on Degrassi: Next Class, telling yet another important story and putting a new face to an underrepresented identity on TV.

Their story is not contained to a single "very special" episode. That's not the Next Class way. Instead, it started off innocuously. Having experienced a growth spurt, Yael sought Lola's help buying a new bra that would enable them to do physical activity without any back pain. However, the gender-based attention that the new bra gave them made Yael feel even more uncomfortable, and they went back to the store — ultimately settling on a chest binder that would make their boobs "disappear" instead of simply supporting them.

Yael's sigh of relief as the binder flattened their chest out was one of the first signs that they might be dealing with something more than just back pain. Later in the season, Yael starts to question and abandon other gendered habits, like shaving body hair.

It isn't until Episode 6, #FactsOnly, that Yael verbalizes the struggle they're having with gender identity, and Lola puts a name to how Yael has been feeling. Then Lola suggests a makeover, because of course she does, but this time it's about making Yael feel more like Yael and discovering who that is.

It's times like this, when characters like Lola can casually say things like “If being a boy or girl is made up, then you can make whatever you want" that makes me really appreciate the power of Degrassi. That conveys the idea of gender as a construct without oversimplifying or lecturing. Not to mention the fact that it adds more layers to Lola and Yael's friendship. Last season, Yael was there for Lola when nobody else was, and now their roles are reversed!

Degrassi has represented a diverse spectrum of LGBT characters and issues. Gender fluidity is just the latest piece of representation in a long history of inclusive storytelling. Until now, Yael's identity has mostly been tied to a red wig. It's awesome that Degrassi is expanding their story and opening up this conversation about expression and identity in such a simple and effective way.