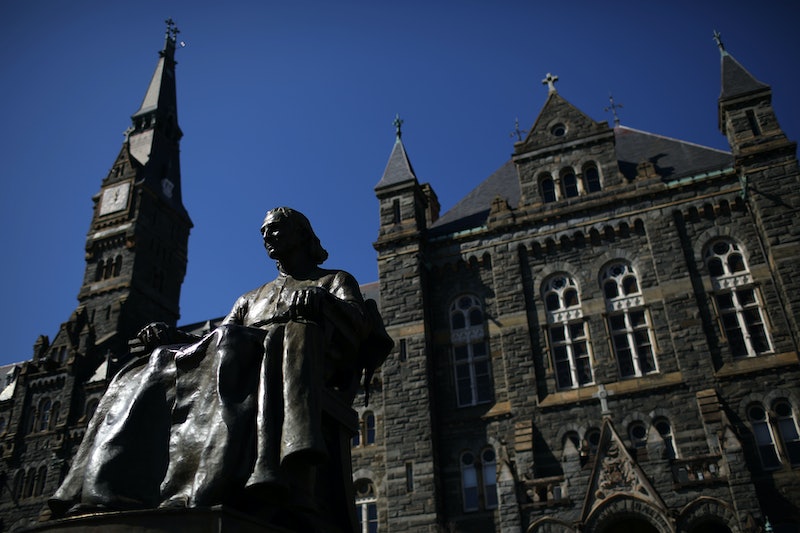 As the fallout continues to take shape during the ongoing college admissions scandal, Yale has rescinded one student's spot at the university. The school did not specify the student's precise relationship with Yale. Some 50 people across the country have been implicated in the alleged scandal, according to CNBC.

Yale University spokesperson Thomas Conroy confirms with Bustle that the student's revoked admission status was a result of the scandal. "Yale has rescinded the admission of one student as a result of this matter," he says in a statement.

It was not immediately clear whether the student whose admission was rescinded was the student who applied to the school with an allegedly falsified soccer profile. Meredith received bribery payments on behalf of a second prospective applicant who was never admitted to the university, according to a statement from Yale's president. The other student, according to the university, "was admitted and is attending Yale." The university has said in a "frequently asked questions" page on its website that it is not legally allowed to reveal either students' name.

"When applicants sign their applications, they attest that the contents are true and complete," university president Peter Salovey said in a statement. "Although I do not comment on specific disciplinary actions taken with respect to an individual student, our longstanding policy is to rescind the admission of students who falsified their Yale College applications."

Prosecutors have said that students were generally unaware that their parents had allegedly participated in illegal efforts to gain them college admissions. Schools targeted with bribes and/or falsified applications include Yale, Georgetown, and the University of Southern California, among others.

Twelve suspects accused of involvement in the scandal were scheduled to appear before a federal judge in Boston on Monday, according to local ABC affiliate WCVB. William “Rick” Singer, the college admissions counselor who has been cast by reports as the alleged mastermind behind the scandal, pleaded guilty to money laundering, racketeering, obstruction of justice, and tax evasion on March 12, according to Rolling Stone. The alleged scheme included efforts to bribe coaches and test proctors, doctor test scores, and falsify student profiles, according to The New York Times.

The scandal's revelation to the public has prompted conversations about meritocracy, wealth, and privilege. As schools comply with investigators and conduct internal reviews on their own, the conspiracy's long- and short-term ramifications are still continuing to unfold.

"This case is about the widening corruption of elite college admissions through the steady application of wealth combined with fraud," U.S. attorney for Massachusetts Andrew Lelling told CNN. "There can be no separate college admission system for the wealthy, and I'll add that there will not be a separate criminal justice system either."

Lelling told the news outlet that the parents involved in the scandal were a "catalog of wealth and privilege," and remarked that "for every student admitted through fraud, an honest, genuinely talented student was rejected."

Yale is currently devising "a code of conduct for athletic recruitment," according to its website. Moving forward, the school said, Yale's director of athletics will scrutinize recruits proposed by the university's coaches.