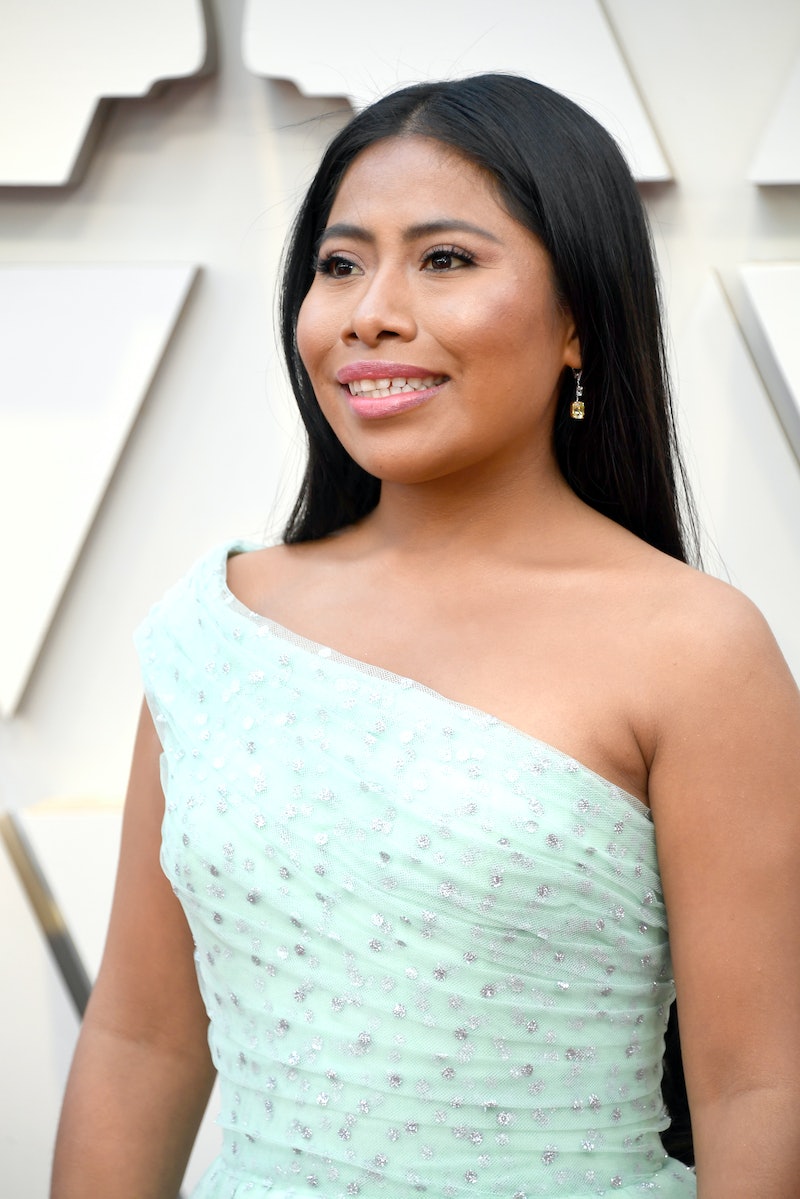 There’s no better time than the Oscars to grab your cheese, crackers, and boujee bubbly and sit on the floor with friends as you all anticipate beautiful red carpet looks. Of all the looks from film's biggest night, Yalitza Aparicio’s Oscars outfit is one that will leave you breathless. It’s an absolute show-stopper.

If you don't know Aparicio's name yet, don't feel like you're not keeping up with the Jones'. Aparicio is a newcomer to young Hollywood, starring as Cleo in the Netflix Original Roma, which earned the Mexican actor an Oscar nomination for Best Actress. Being that it’s the 25-year-old's first movie to ever star in and she’s already up for a huge accolade, it’s one game-changing way to make a fire debut in entertainment, and her Oscars look is just as lit.

The Roma star stepped onto the red carpet wearing a sky blue dream dress that can only be described as mesmerizing. Aparicio wore an off-the-shoulder baby blue gown with silver print polka dots all throughout. While the top of the gown's bodice hugged Aparicio down to her waist, the dress flared out into layers of baby blue tulle.

The entire look just screams, “I’m fabulous and happy to be here." And that is exactly the kind of energy anyone up for their first Oscar would have.

Aparicio is one star who shows up to grace the world with her natural features. She kept her makeup simple and sweet, using a healthy amount of blush, mascara, and topped it off with a pink lip. Don’t get it twisted, though, because she definitely threw a swipe of highlighter on her killer cheekbones for a glow. It's still the Oscars, after all.

Many stars who have hit the Oscars red carpet opt for an old Hollywood hairstyle, a sleek updo, or anything with curly tendrils to frame the face. Aparicio, on the other hand just isn't that kind of person. The actor left her shiny hair down with a simple part down the middle, letting her dress speak for itself. Aparicio is looking like a vision of cotton candy in the absolute best way.

Aparicio's nomination for Best Actress is already a stepping stone in the history of film. The Roma star broke barriers as the first Indigenous woman to be nominated for an Oscar and only the second woman of Mexican descent to achieve the Best Actress Oscar nod. Despite the fact that this is Aparicio's first acting job, she's making moves in the industry quickly.

It's always nice to see more and more people of color get award recognition for their work in media, and film fans can hope there will be even more actors of diverse backgrounds to have their stories played out on screen.

In the meantime, fangirl over Aparicio's Oscars outfit some more. You’ll probably stan so hard for this look, it might just become your new phone background.