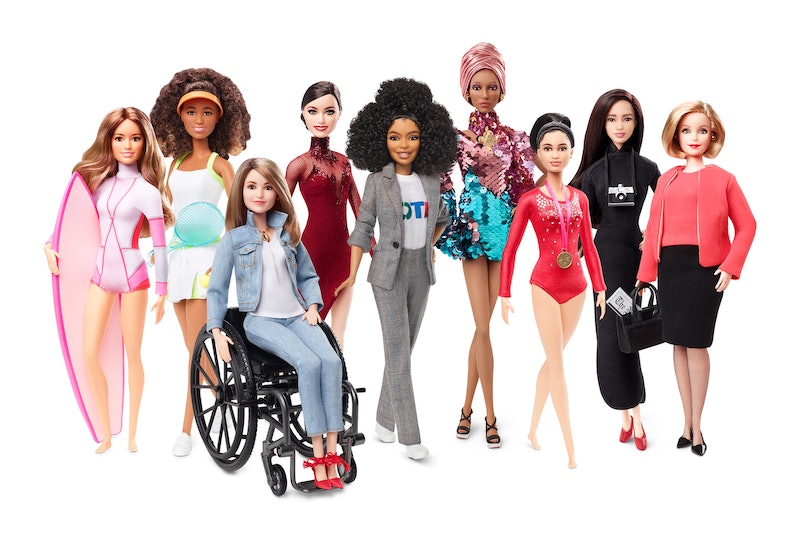 Barbie is bringing her representation game up to 11, and I am living for it. Yara Shahidi, Naomi Osaka, and other “Sheroes” are getting their own Barbies in celebration of Barbie’s 60th anniversary and International Women’s Day on March 8. Mattel announced in a news release that it is honoring the largest lineup of global female role models. The company has also announced it is taking the next steps to close the “Dream Gap” by donating funds to organizations that aim to “level the playing field for girls.”

Barbie is honoring more than 20 “sheroes” in multiple countries and continents speaking 13 languages, according to the news release, and these role models range in age from 19 to 85. In addition to actor, model, and activist Yara Shahidi and tennis superstar Naomi Osaka, Barbie is releasing dolls of model and body activist Ashley Graham, film director Ava Duvernay, and supermodel and activist Adwoa Aboah, among many other super amazing people.

"For 60 years, Barbie has championed girls, inspired generations to believe through make-believe and showed them that they have choices,” Lisa McKnight, general manager and senior vice president of Barbie, said in a news release. “With more than 200 careers, six runs for president, and a trip to the moon before Neil Armstrong, Barbie continues to evolve to be a modern, relevant role model for all ages.”

Osaka said she feels honored be included in the “Sheroes” initiative, according to People. “I’ve played with Barbies when I was a kid, and I think it’s a bit of a surreal experience to have the opportunity to have a Barbie that looks like me,” Osaka told People. She said she hopes having a Barbie doll that represents high-achieving female athletes will inspire girls who loves sports to maintain their own sports goals and dreams, People reports.

Shahidi expressed similar sentiments about being included in the “Sheroes” initiative. “I’m honored to be repping all the young ones as a Barbie Role Model,” Shahidi said in an Instagram post. “Let’s continue to inspire the next generation and each other. We need your voices and are watching you all blossom and shine! #YouCanBeAnything #Barbie60.”

According to Barbie, starting as young as 5, many girls stop believing they can do or be anything just because they’re girls, and that’s what the Dream Gap is. And there’s plenty of research to back that claim up. A 2017 study published in the journal Science found girls start to believe boys are smarter than them as young as six years old. To help combat this, Barbie is donating $1 from every doll sold in the United States (except in select states) up to $250,000 through March 11 to organizations dedicated to closing the Dream Gap, the company said in a news release.

A representative from Mattel confirmed to Bustle via email that these are one-of-a-kind dolls that are not available for purchase at this time. Girls — and people of all ages — can play out different roles with more than 50 career dolls options to choose from, along with Barbie's Inspiring Women series that honors historical women, including Amelia Earhart, Katherine Johnson, and Frida Kahlo.

Although these dolls aren't currently available for purchase, it's super cool to see Mattel honor these women with their own one-of-a-kind dolls. The world needs to see more women uplifted for the vital contributions they're making every single day, and this is such a unique way to do that.

More like this
10 Photos Of William, Harry, & Their Cousins Honoring The Queen Together
By Stephanie Topacio Long
How To Wear A Bucket Hat Like Rihanna, Dua Lipa, & More
By Allie Fasanella
Serena Williams Looked Like Royalty In A Bodycon Velvet Dress
By Allie Fasanella
Hailey Bieber Is Making Cargo Trousers Work — Here’s How You Can Too
By Catharina Cheung
Get Even More From Bustle — Sign Up For The Newsletter