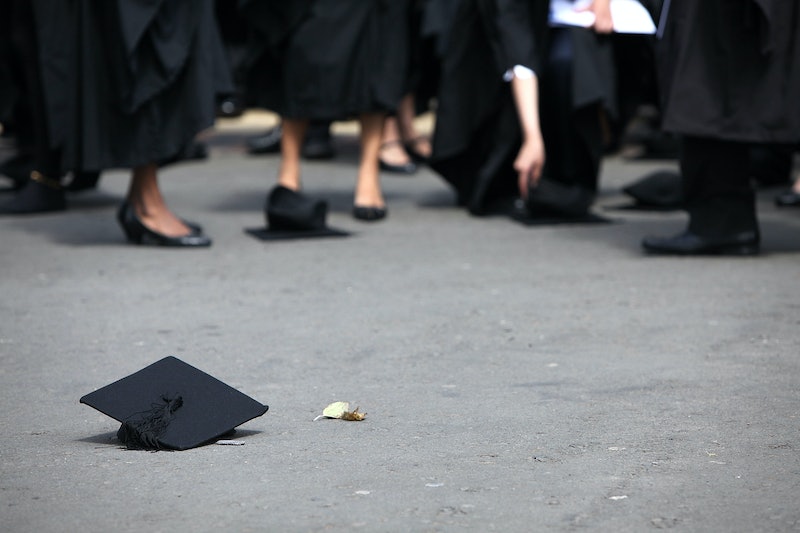 Well before their graduation, young women at one college learned about real-world sexism thanks to one very disturbing email. On Tuesday, BBC News reported that a Belgian university administrator instructed female medical graduates to wear "a nice revealing neckline" at their June commencement ceremony, sparking widespread backlash in the country.

The email, sent from "a member of the secretariat" at the Free University of Brussels, explained why a low-cut top was preferable: "From an aesthetic point of view, it is better for young women to wear a dress or skirt, and a nice revealing neckline." Not only does the email suggest that a revealing outfit is best, but it also tells women that they should wear a dress or skirt, further conforming to sexist dress codes.

"Of course, ladies, this advice is not obligatory," the writer of the email added, though it reads as an afterthought. Male students, meanwhile, were asked simply to wear suits. The email expresses an oppressive attitude toward female students by giving inappropriate instructions about their attire. Rather than telling them to wear formal dress, it takes it way too far.

This suggestion was not received well by students. Some shared it on a Facebook page called ULB Confessions, where students typically post jokes and memes. Word spread and students reacted angrily, with one commenting:

The dean of the school of medicine, Marco Schetgen, confirmed the email was legitimate, and said that he was shocked that it was sent out. The school also apologized for the note on its Facebook page:

The Faculty of Medicine, through its Dean, presents its most sincere apologies to all the students who received the mail mentioned below. This is a mail addressed to future graduates and giving practical instructions for the day of the ceremony. It goes without saying that the instructions relating to the clothing of young graduates are as inappropriate as they are contrary to the values ​​defended daily by the ULB and its Faculty.

It is extremely disappointing to think that this kind of sexism is happening at a university, but at the very least, school officials seem to be taking responsibility for the situation, and hopefully, will learn from this lesson.

More like this
Iran Has Issued A Death Sentence Over Mahsa Amini Protests
By Catharina Cheung, Darshita Goyal and Maxine Harrison
Kim Kardashian Is “Disgusted & Outraged” By Balenciaga Ads
By El Hunt
Google Wants You To Shop Black-Owned The Friday After Thanksgiving
By Dominique Norman
MOBO Awards Found Kanya King On The Woman Whose Grit & Determination Spur Her On
By Kanya King
Get Even More From Bustle — Sign Up For The Newsletter