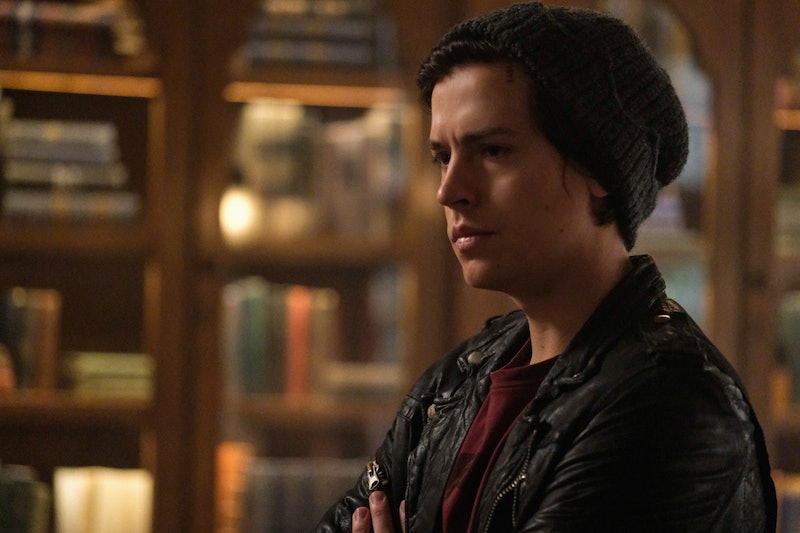 Four seasons in, it's pretty much impossible to make it through a Riverdale episode without a character breaking into song. The one person you can usually count on to refrain is Jughead, but that won't be the case in the upcoming Season 4 musical episode, because Cole Sprouse is once again singing (yes, really).

Though Sprouse sat out the show's first musical episode, Season 2's Carrie, he made up for his absence in Season 3's Heathers by belting out the love song "Seventeen" with his costar Lili Reinhart. And as Riverdale creator Aguirre-Sacasa confirmed on Twitter, Sprouse will be back onstage for April 15's Hedwig and the Angry Inch. "BTW, @colesprouse singing is AMAZING," he teased alongside a photo of Sprouse playing the drums.

Photos from the episode reveal that The Archies, a band from the comic books comprised of Veronica, Archie, Jughead, and Betty, will finally be making their debut on the series — with the addition of Kevin on the keyboard.

Another photo shows the five of them performing some sort of dance routine on the roof of Pop’s, suggesting that Sprouse will be singing multiple songs this time around — and dancing along with them.

The episode's official title is "Wicked Little Town," named for one of the songs in Hedwig and the Angry Itch. As Aguirre-Sacasa told Entertainment Weekly, that's part of the reason he picked it: "When you have a song called 'Wicked Little Town,' it's describing Riverdale," he said.

Though in the show's previous two musical episodes, the students performed Carrie and The Heathers as staged productions, they'll be singing the songs of Hedwig as part of a variety show. This is because the school's principal, Mr. Honey, has forbade Kevin from putting on Hedwig. So, he enlists the help of his friends — including Jughead — to rebel "in a very, very glittery way," star Casey Cott told EW. Hopefully, that also means we'll get to see Sprouse in a wig.