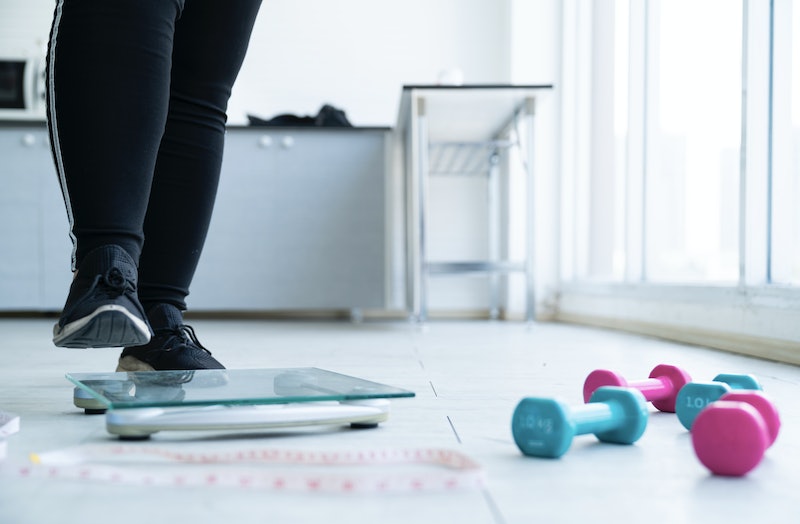 For most of my senior year of high school, I only ate solid food a few days a week. I don't think I intended to do that — not at first, at least. I was just always so busy with school and a million after school activities that eating tended to slip my mind. Eventually, I saw myself losing weight — and getting compliments for it. It felt really good. I had struggled with my weight since entering puberty, and I never lost weight as easily as I did when I just stopped eating.

I started lying about food, making excuses to friends and my parents about why I wasn't eating.

By the time I hit graduation, I had lost 80 pounds. Not a single person expressed a hint of concern. They just told me how great I looked.

My first few episodes happened before I came out as trans, which I'm sure were part of why absolutely no one noticed what was going on. If people are likely to overlook an eating disorder in a fat girl, they're pretty much never going to see it in someone they think is a chubby boy.

In fact, I didn't even realize that I had an eating disorder until I was in my 30s. I always thought anorexia was a thing that only happened to conventionally pretty, skinny girls. No one, including me, expected the awkward, fat trans girl to be anorexic.

Two weeks later, I sat looking at a carefully constructed graph I had made charting my weight, and a something inside me finally broke. I thought "Oh wow, this is what an eating disorder looks like."

I was in the middle of a relapse when it dawned on me that I might have a problem. I was in my first year of graduate school, and I was completely overwhelmed with stress to the point where I couldn't eat. After three days of surviving on little more than diet soda, being hungry stopped being uncomfortable and started feeling reassuring, like I had control over something. I started relishing that gnawing empty feeling in my stomach. I began weighing myself every day, and every time the number ticked down a little more, I felt a little thrill. Two weeks later, I sat looking at a carefully constructed graph I had made charting my weight, and a something inside me finally broke. I thought, "Oh wow, this is what an eating disorder looks like."

After that realization, I looked back on life since puberty and realized how many times I had gone through long periods where I stopped eating. These periods almost always correlated with times when I was struggling for control in my life, when my self-esteem was especially low.

The ways in which our society treats fat people played a big part in why I ended up anorexic to begin with. As a child, I was never actually overweight; I was pudgy, but never outside the normal range for someone my age. But to my classmates and to my family, I was "chubby." I was bullied relentlessly in elementary school for "being fat," and even my parents made comments about my weight. I was 10 years old the first time my mother forced me onto a diet, carefully restricting what I was allowed to eat in hopes that I would lose weight. I didn't, but I did learn that being fat was something to be ashamed of, and that eating was something that fat people were supposed to be ashamed of.

Even after I realized that I had been suffering from anorexia, I kept it a secret for years. I was deeply ashamed, and I honestly didn't think anyone was going to believe that a girl of my size had ever starved herself.

Worse yet, because I've always been overweight as an adult, any time I was in the middle of a relapse, I'd get all kinds of encouragement from everyone around me. I even had doctors notice my at-times-dramatic weight loss and say nothing more than, "Whatever you're doing, keep it up!"

As a fat person, I already struggle with feeling like my body is undesirable, unattractive, and unworthy of being touched. Being trans only amplifies those feelings, since the cultural messaging around both fat bodies and trans bodies is remarkably similar.

My current partner was the first person I was ever able to open up to about my struggles with anorexia. I was struggling with another relapse after some particularly complicated personal stress, and a new medication had made it far easier than normal to stop eating. I lost almost 30 pounds in less than six weeks, and I panicked that I was starting to lose control. I finally broke down and spilled about everything I had been struggling with in secret for so many years. I was terrified that she was going to judge me or not believe me, but I knew I needed help. Thankfully, my trust in her was well-placed; she just held me and let me spill it all out. Even being able talk to just one person about my disorder was an enormous weight lifted off my shoulders, though it remains something that I've kept extremely private until this essay.

Being trans adds another level of complication to my difficult relationship with my body. As a fat person, I already struggle with feeling like my body is undesirable, unattractive, and unworthy of being touched. Being trans only amplifies those feelings, since the cultural messaging around both fat bodies and trans bodies is remarkably similar. Both being fat and being trans are viewed as being fundamentally incompatible with being beautiful, and for trans women, our ability to cram ourselves into cisgender-normative beauty standards has a strong impact on our ability to move through the world with minimal harassment and discrimination. I'm constantly battling my own internalized fatphobia and transphobia eating away at my confidence. That's a lot of motivation to get downright obsessive about my weight.

I hesitated about writing so publicly about having an eating disorder. Many people still see the idea of a fat girl who stops eating as someone who is "doing the right thing for her health," and our cultural view of fatness as inherently unhealthy plays heavily into that. Even now, I can anticipate the scores of people who will tell me that I can't actually be anorexic, since the clinical criteria for Anorexia Nervosa historically required you to be medically underweight. Research has shown that medical professionals often miss eating disorders in overweight teens because of these inherent anti-fat biases. But I also know I'm far from the only fat girl, trans girl, or fat trans girl to suffer from an eating disorder, and it's time for people to see that anorexia and other disorders like it can affect more than just thin women.

If opening up about my experiences helps even one person feel like their struggles with food are legitimate and leads them to maybe get help, then it will have been worth it. Our cultural obsession with thinness and white cisgender-normative beauty standards are deeply harmful to the psyches of all women, but particularly to fat women and trans women. Our bodies are beautiful and worthy of love just as they are, despite the ugly messages that are continually dumped all over them. And those of us who have struggled with that desire, and suffered from real and legitimate eating disorders, deserve to have our experiences acknowledged for what they are.