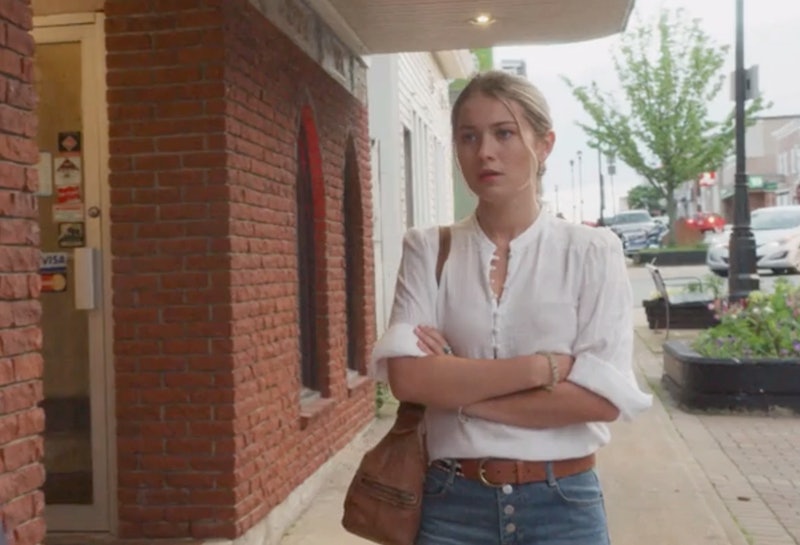 If you've been paying attention to the news over the last year or so, you can probably tell from the title that Lifetime's Escaping Nxivm: A Mother's Fight To Save Her Daughter is based on a true story. It's even referred to as a "ripped from the headlines" movie in the logline. That means that the main character, India, is also based on a real person: India Oxenberg, who was a member of the now-infamous suspected sex cult for seven years.

The film is based on India's mother Catherine Oxenberg's memoir, Captive: A Mother's Crusade to Save Her Daughter from a Terrifying Cult. Catherine served as an executive producer, but India was not involved. "It's very important that she has ownership over the telling of her own story," Catherine told Entertainment Tonight.

In Escaping Nxivm, Catherine (played by Andrea Roth) takes her 20-year-old daughter India (Jasper Parish) to a leadership seminar, where she's introduced to Nxivm's charismatic leader. India then becomes more deeply ingrained in the organization, while Catherine desperately struggles to get her out.

This aligns with Catherine's real-life account. "What we went to was an intro for a leadership program," she told ET of India's introduction to Nxivm at 19 years old. "I thought that she might benefit from some leadership skills because she was going into the business world.”

Afterward, India began getting further involved in the organization. Catherine claimed to ET that Nxivm leader Keith Raniere and Smallville actress Allison Mack, a high-ranking member, pressured India to participate in a sexual relationship with Raniere and follow a strict 500-calorie-a-day diet. She also alleged that they branded India with a cauterizing pen. (Raniere was convicted in July for sex trafficking, racketeering and forced labor conspiracy, while Mack pleaded guilty to racketeering and racketeering conspiracy charges in April and is awaiting sentencing).

According to ET, India remained an active member of Nxivm until June 2018, shortly after Raniere was arrested. In August, Catherine told RadarOnline that India had moved out of the New York apartment where she lived with Mack. "India is moving on with her life. She is doing really well and I'm impressed with how she is handling it all," she told the outlet.

Princess Elizabeth of Yugoslavia, India's grandmother, also told RadarOnline in September that Catherine and India had repaired their estranged relationship. "I just know that [India] and her mother are very close again, and we're very relieved and grateful for that."

But while her family has done press for the movie, India has not, which Catherine said is symbolic of her desire to move on from this chapter in her life. "Deciding to make the film actually was a harder decision because my daughter was out of the cult and wants to move forward and doesn't want the stigma of being associated with Nxivm," she said during a recent Good Morning America appearance.

However, if you're interested in what India is up to now, she does have a public Instagram account. Otherwise, you can watch her mother's side of the story play out when Escaping Nxivm premieres Sept. 21.