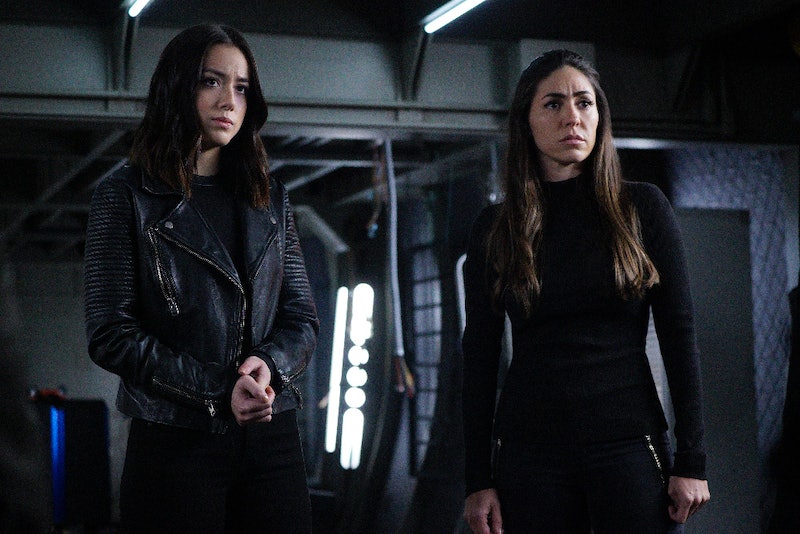 Did anyone else forget that Agent May basically missed an entire half season of Agents Of S.H.I.E.L.D.? While she was catching up on real world events, another member of the team escaped them in a dangerous way. In order to try and rescue Mack, Yo-Yo enters the Framework on Agents of S.H.I.E.L.D. but, as she's an Inhuman, found herself in immediate peril.

Elena is devastated to learn that Mack didn't remember her in the Framework, but seems to understand his reasoning for leaving the real world behind. Unlike Daisy, Elena knew about Mack's daughter Hope. So at the end of the episode, Elena sneaks off and hooks herself into Aida's computer system to see for herself. Daisy had advised her not to, but it's too late now.

Seriously though, what's happened to the Hydra-led dystopia since the team left? It's not like I expected Yo-Yo's arrival to be carefree. Jemma was buried alive when she got to the Framework! She woke up strapped to a table in a burning, abandoned room. Have they gone full Apocalypse? It looks like the Inhuman was being studied, but something else bad is happening. Hopefully the rebels will find her soon.

As dangerous as it is, I can't fault Elena for going after the man she loves. Someone has to get a romantic win around here! Coulson's stuck between an emotional rock and a hard place, having been pursued by Android May only to discover that none of that was real. Meanwhile, don't even get me started on the FitzSimmons heartbreak, even though they've already started healing. I saw this all coming a mile away, but that doesn't make it hurt less. At least Elena is as ready to be done with Aida/Ophelia as I am.

I'm also not complaining about another trip to the Framework. Call me crazy, but I liked dipping into that weird Agents of S.H.I.E.L.D. alternate universe. Plus, we might get to see Ward and Trip again. Maybe Yo-Yo can figure out how to get Aida's 3D printer to work, and she and Mack won't return alone.