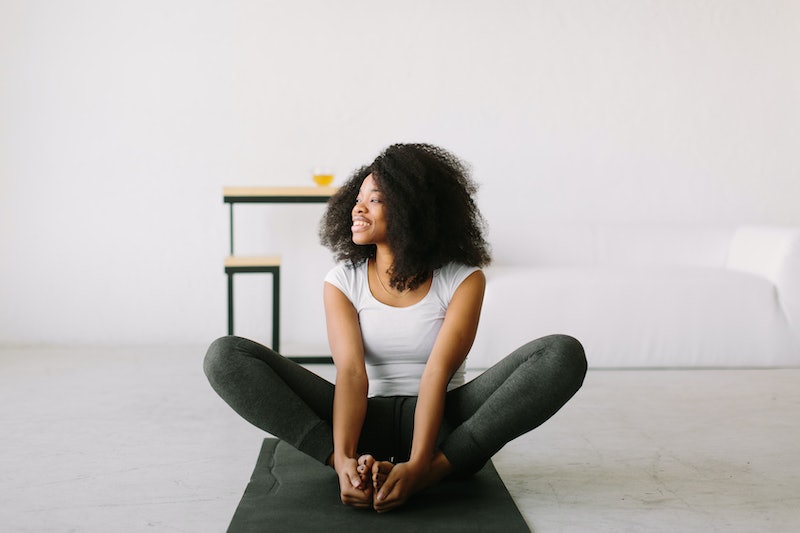 You're likely aware of all of the benefits of yoga. These days practicing your poses has been reported to help you with everything short of cleaning your house. Now, new research from Boston University suggests that twice weekly yoga can help treat depression. However, it's not just the poses that can lift you out of the bell jar. The study reports that it's actually the breathing aspect of yoga that delivers the most healing benefits.

I've been a casual yogi since I was a teenager, but I've never been able to really stick with the practice. This research might get me back to my mat since I've also been a close friend of depression since I was 12, and medication doesn't make me feel 100 percent better.

Time magazine reported that the yoga study, published in the Journal of Alternative and Complementary Medicine, included 30 people ages 18 to 64 with clinical depression, who were either not taking any antidepressants, or had been stable on medication for at least three months. Half of the study participants were assigned to take a 90-minute Iyengar yoga class, which emphasizes alignment, precise postures, and controlled breathing, three times per week, as well as four 30-minute sessions at home each week. Participants in the other group took two group classes and three at-home sessions every week.

After three months, a majority of the people in both groups scored 50 percent better on their depression questionnaires, Time reported. The group that did more yoga had better scores, but because participants admitted the time commitment was challenging researchers recommend a minimum of yoga two classes a week.

For people who are medication-sensitive, or who are looking for a medication-free depression treatment, this is good news. Lead author of the study, Dr. Chris Streeter, an associate professor of psychiatry and neurology at Boston University School of Medicine, told Time that people who haven't responded to traditional treatments might benefit from yoga, because unlike antidepressants, yoga and deep breathing techniques target the autonomic nervous system.

“If your autonomic nervous system is balanced out, then the rest of the brain works better,” Streeter said in Time. She went on to explain that 40 percent of people taking antidepressants still suffer from depression, and yoga can help close that gap (I'm one of those 40 percent). “Getting that 40 percent all the way better is a really important goal. Instead of adding another drug, I would argue that yoga is another thing you can add to the treatment regimen that might help.”

Streeter advised that Iyengar yoga is generally considered safe for people of all levels, but it's not the only type of yoga with health benefits. I began practicing Pranayama yoga off and on about five years ago. If you're physically limited, and can't practice traditional yoga, this is a great alternative. It simply involves lying on your yoga mat, and repeating a three-part breath. The first time I did it my entire body vibrated, and an instant feeling of wellbeing washed over me.

My friend Nathaniel Dust, who is a pranayama yoga breathwork practitioner, says this is because breathing is an active practice that allows people to quiet the incessant chatter in their minds. For example, if you have thoughts that run in your head over and over, and you'd like to shut them up — this can help.

"With breathing, you're able to generate the feeling of relief that everything is going to be OK," Dust tells me.

During my breathwork practices I have experienced emotional releases, physical relief from aches and pains, and a more positive outlook (I trend toward the morse so this is a pretty big deal for me). I have even gone on retreats with breathwork groups where we do things like walk barefoot over hot coals (really, I've done this twice), and hike up to an active volcano in the middle of the night.

However, for any kind of yoga practice to be beneficial there's one catch. You actually have to do it. This is where I run into the problem, so let's make this a little easier. Since all types of yoga are beneficial to your health, pick the practice that's going to be the easiest for you to stick with. For me, I know that I need to leave the house and go to a class, or I won't do it at all. If you like to practice at home, there are tons of online yoga classes for every type of yogi. Let's make a deal; I'll try it if you will.