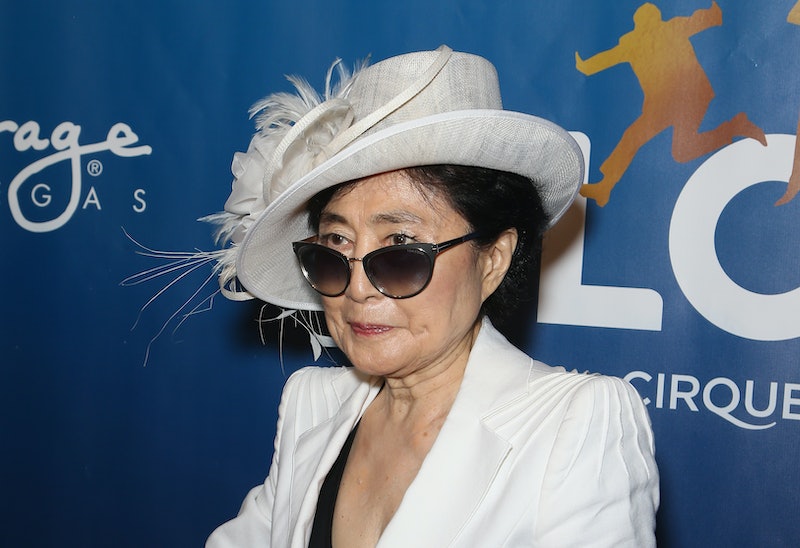 In 1971, John Lennon released "Imagine," a sparse soft pop reverie that would quickly become one of his most iconic songs as a solo artist. The late singer was always listed as the writer for the track, but now, over 45 years later, Yoko Ono is finally getting credit for co-writing "Imagine," according to Variety. It's a long overdue amendment: Lennon is quoted as saying Ono should share recognition as far back as 1980 — just shy of a decade after the song's release — though frankly (and quite obviously) she should have been included from the start.

According to Variety, David Israelite, the National Music Publishers Association's CEO, made the announcement during the group's annual meeting on Wednesday. While delivering the news, he played an archival clip in which Lennon said,

"['Imagine'] should be credited as a Lennon-Ono song because a lot of it — the lyric and the concept — came from Yoko. But those days I was a bit more selfish, a bit more macho, and I sort of omitted to mention her contribution. But it was right out of Grapefruit, her book. There’s a whole pile of pieces about ‘Imagine this’ and ‘Imagine that.'”

Israelite added that "things may have been different in 1971," but that he was "glad to say things have changed." He later clarified to Variety that the process of adding Ono's credit isn't yet confirmed, as there are still some pending legal issues, but that it is, indeed, ongoing.

That Ono is finally getting acknowledged for her contribution to the song is a admirable triumph, though it does cause you to wonder why, exactly, it took nearly half a century. There is a long, egregious history of women being denied credit for their work, ideas, and accomplishments, and it's more often than not at the behest of men.

As documented extensively by Mother Jones, such instances date back all the way to the Paleolithic era. Pre-European cave paintings were attributed to male hunters up until 2013, when a scientific study by Archaeologist Dean Snow found that the majority of the hand tracings were likely done by women. And even 2.6 million years later, it persists, from Kanye West's widely contentious proclamation about Taylor Swift that he "made that b*tch famous" to President Donald Trump's 2011 assertion that Lady Gaga somehow owed him her career because he'd once invited her to perform at the Miss Universe pageant.

Yono's accreditation is certainly a step in the right direction, but there's undoubtedly a boundless line of women who are still barred from their rightful place in history books. Hopefully, the NMPA's actions can make even the smallest impact in rectifying that and help to pave the way for a better, more equal future.

More like this
Graham Norton’s 10 Best Eurovision Zingers Will Leave You Howling
By El Hunt
Selma Blair Wrote Through The Pain
By Samantha Leach
How Reality TV Stars Conquered Your Bookshelves
By Anna Peele
We’ve Got A Text! 'Love Island' 2022 Finally Has A Release Date
By Sam Ramsden and Frances Stewart
Get Even More From Bustle — Sign Up For The Newsletter