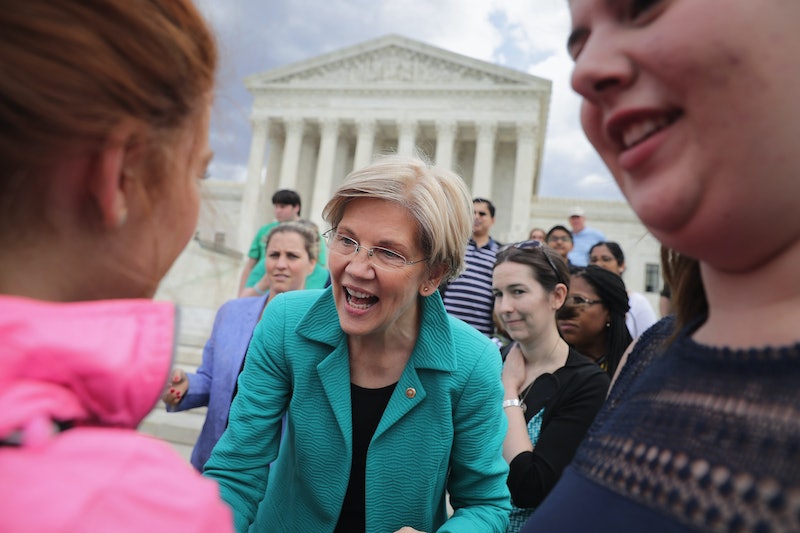 It's been under 48 hours since Senate Majority Leader Mitch McConnell patronizingly explained why he invoked Rule XIX to silence Sen. Elizabeth Warren. In words that have become a new rally cry, McConnell stated:

She was warned, she was given an explanation. Nevertheless, she persisted.

Almost instantly, the hashtag #ShePersisted blew up on Twitter and people posted memes and graphics with the now-iconic phrase, so it is unsurprising that T-shirts reading "Nevertheless, She Persisted" are already available online.

Websites like Teespring, Redbubble, and Rageon all have various shirts, mugs, iPad cases, and other merchandise sporting the admonition-cum-rallying cry available for purchase.

This is hardly the first time in recent political memory that a memorable line has become a merch craze so quickly. Back in October, after Donald Trump used the phrases "bad hombres" and called Hillary Clinton a "nasty woman" during one of the presidential debates, the phrases sprung up on all kinds of products, including shirts, buttons, and mugs.

It's a bit of a sticky wicket, these moments of instant political branding. On the one hand, nothing makes a movement seem cheaper than someone using it to sell stuff. There's a certain poetry in McConnell's line — how he intended it to scold her, but how feminists are holding it up as a cry of resistance — that neatly describes the tensions between empowered women and the men who would see them shut up. Putting it on a T-shirt is one thing… but on a decorative throw pillow?

On the other hand, given the lack of cohesion Democrats have seemed to have had in the early days of the Trump administration, a concise, cogent slogan — yes, even emblazoned on laptop cases — might be useful to a party who seems to be lacking unity (despite having a pretty awful bad guy to unite around).

Plus, it’s tough to criticize the designers who try to make money through sites like Redbubble and TeeSpring for attempting to capitalize on the moment — we are a capitalist society after all. Besides, the proceeds from some sales are going to benefit Planned Parenthood, the ACLU, and others.

More important than whether anyone or even any great nonprofit benefits from this is the issue of whether Democrats can channel this energy. Will they be able to use it to fuel their larger argument for why the GOP doesn't deserve the power it won in last November's election?

I must admit it was disheartening — to say the least — to watch Sessions' nomination sail through on Wednesday, 52-47-1 (Sessions himself abstained).

Perhaps this entire episode is emblematic of the challenge that the left has faced throughout the last year. Politicians and leaders on the right do something that outrages a good chunk of Americans and they take heat for it, but soon, many on the left forget. If a T-shirt or a mug helps them remember, well, then bring on the merch.

More like this
Watch Jacinda Arden’s Devastatingly Honest Resignation Speech
By Sam Ramsden
24 History-Making Black Women You Probably Didn't Learn About In School
By Ayana Lage and JR Thorpe
25 Inspiring Quotes From Black Women To Celebrate Black History Month
By Kyli Rodriguez-Cayro and JR Thorpe
Twitter Is Identifying With Sally Field & Jane Fonda’s Friendship In New Viral Video
By Jake Viswanath
Get Even More From Bustle — Sign Up For The Newsletter
From hair trends to relationship advice, our daily newsletter has everything you need to sound like a person who’s on TikTok, even if you aren’t.