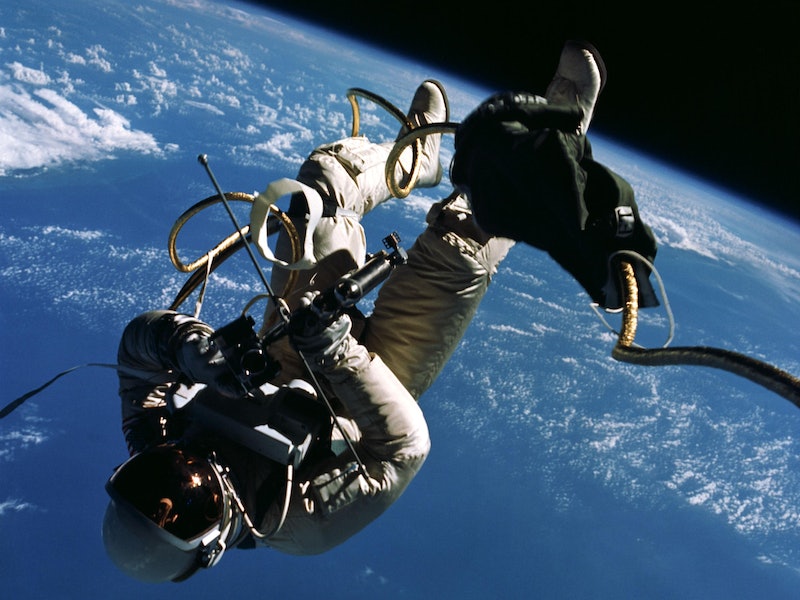 OK, we all have to have dreamt about going to space at least once. Floating around, real-life moonwalking, eating freeze-dried Neapolitan ice cream — it's a fantasy that starts with your first field trip to the science museum or planetarium as a kid. As we get older, though, jetting off into the stars pretty much feels like an impossible childhood daydream. Blue Origin, an innovative aerospace company owned by Amazon CEO Jeff Bezos, has different ideas — and one employee divulged that they've already put a potential $200,000 to $300,000 price tag on taking a commercial trip to space.

"Earth, in all its beauty, is just our starting place," Blue Origin says in a bold statement on their website, and the words do a perfect job of capturing the company's mission so far. They've created the New Shepard, a commercial rocket that earned its place in history with the world's first vertical landing from space. "Soon it will launch you into history too, as a pioneer in the next era of human spaceflight," Blue Origin describes. Chills. Even more promising is their groundbreaking New Glenn, a spacecraft powered by reusability that can only be explained as a "major step" toward achieving Blue Origin's goal of "millions of people living and working in space."

$200,000, which is on the low end of the Blue Origin employee's predicted cost of space trips, is a mammoth price (seriously, I better get to have dinner with the Guardians of the Galaxy while I'm up there). Exactly what kind of out-of-this-world experience do you get after you foot the massive bill? According to an exclusive report from Reuters, you'd first get to board Blue Origin's New Shepard with five other passengers. Once the capsule reaches suborbital space (over 62 miles above our planet), you'd get the chance to float weightlessly and marvel at a once-in-a-lifetime view of the Earth from beyond. Six windows (nearly three times as tall as those in a classic Boeing Co 747 aircraft) will be spread around the capsule for you to look through. The rocket itself initially detaches from the passengers' capsule, but you'd be safely returned to land by parachutes. Reuters reports that the space-bound experience lasts a total of "a few minutes."

If you know that you're destined to go to space, you still have a ton of time to start saving up (maybe if I start now, I'll have enough to book a trip for my 60th birthday). Creating space-dwelling human communities isn't in Blue Origin's immediate future, and the first commercial tickets to ride in the New Shepard are still at least a year away. So far, Blue Origin has completed eight separate vertical-landing flight tests, from New Shepard's Texas-based launching site. They have yet to do a test with passengers aboard (so far the spacecraft's guest of honor has been a test dummy named "Mannequin Skywalker"), but one employee told Reuters that the first live passenger-bound test into space will be happening "within weeks."

So far, Jeff Bezos and the Blue Origin team have kept their lips sealed about the pricing and official trip dates aboard the company's New Shepard (which is why the employees who released statements chose to remain anonymous), but it seems like progress is quickly being made. Bezos has stated that he wants the Blue Origin trips to be more than a Westworld-like playground for the rich. Just months ago, he spoke at a conference about one of the company's end-goals: to transform the moon into an industrial hub. Yep, we're talking a straight up moon colony. He believes that the process could help conserve Earth's resources and ultimately spark the creation of the first-ever global space village. Get ready, guys — the final frontier awaits.