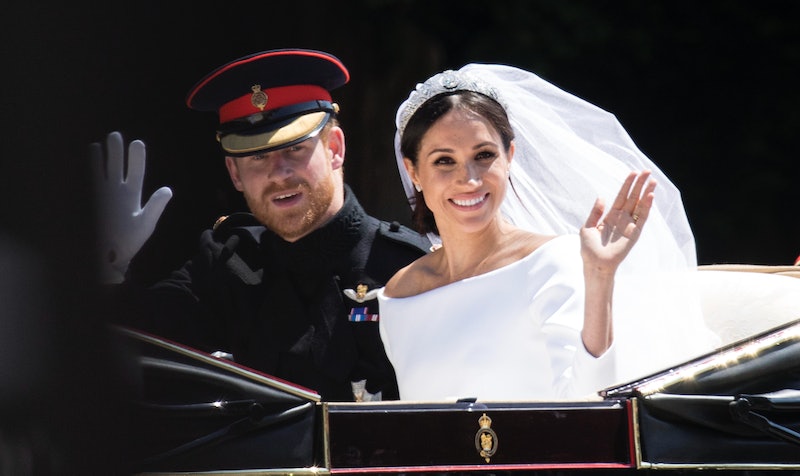 For a long time, all we could talk about was the dress. Meghan Markle wowed us with a chic boatneck bridal gown with an epic veil by Givenchy. Meanwhile, Prince Harry was charming, the pageboys adorable, and the wedding ceremony was simply groundbreaking for the Royal Family. But I almost feel sorry for the newly-appointed Duchess of Sussex because now she's been married for all of five minutes, she'll be batting off the question every newly married (or long-since married, or single) woman has to contend with: "So, when are you having children?" Simply put, you should never ask a woman when she's planning on having kids. While the question seems harmless and is often asked by well-meaning elderly relatives at family dos, it can be incredibly damaging and hurtful.

Some women don't want to have children, and that's totally fine. But by asking when they're going to have kids, it's implied that they are definitely going to at some point, when every woman is perfectly within her right to not want children at all, without needing to explain or defend this. It's a loaded question that can make women feel they're giving the wrong answer to the question, when really, there isn't a right answer. Dr. Natasha Bijlani, consultant psychiatrist at Priory’s Roehampton Hospital in London, tells me: "Humans are essentially social and family-based and, in some societies, those who choose not to have children are even looked down upon, and regarded as being incomplete or even selfish."

Additionally, some women are struggling to conceive, and choosing to say nothing of their painful, desperate fertility struggle. Roughly one in seven couples can struggle to conceive in the UK — that's around 3.5 million people — according to the NHS. It may take years and it may not happen at all, and no woman should have to discuss that if she doesn't want to. It can lead to feelings of inadequacy and be deeply upsetting. "Infertility can certainly be emotionally crippling for some. Someone who has spent their entire life dreaming of becoming a parent, and then not being able to have children, is likely to experience considerable grief and loss and maybe even consider themselves a failure," Dr. Bijlani says.

It's also worth remembering that if infertility is an issue, it's not an exclusively female issue. Men can also contend with infertility, but it feels to me that they are less often scrutinised in the same way, or asked such deeply personal questions, as women.

There's also the issue of miscarriage. Many women haven't even announced a pregnancy before they miscarry, as they're most common early on (three in every four miscarriages happen in the first trimester, according to the NHS), meaning a woman could be unwittingly asked if she's trying for a baby the day after she miscarries. It seems truly cruel to do so, even if the person asking the question has no idea. That's why it's best to just steer clear of the topic in general.

Some women would love to meet the right person to have children with, but haven't met him or her yet. Talking about this can be painful in itself, and a woman may be too afraid or financially restricted to have children alone. On the flip side, plenty of single women are trying to get pregnant and raise kids, but because they're not married, they're not asked about their fertility or trying for a baby.

Asking a woman when she's having children can create a huge amount of external pressure for absolutely no reason. Having got married myself last November, I can tell you that I'm utterly happy enjoying life as a newlywed, but the baby questions started coming thick and fast as soon as the honeymoon was over.

Meghan is 36 years old. Whether or not she and Harry want children or are able to have them is a conversation between the two of them and no one else. I hope the new Duchess of Sussex is loving every minute of newly married life, and isn't stressing about anything. Initiating a conversation about when a woman is having children is not something any of us should be doing — at the very least, it's a personal discussion of someone else's sex life that they may not be comfortable with. It's generally asked out of nosiness, and can expose a host of wide-ranging, painful emotions. So if in doubt, steer clear.