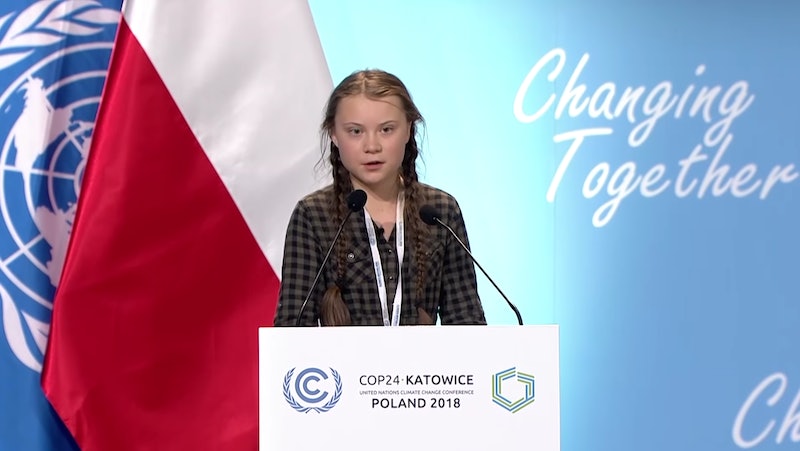 As negotiators from around the world struggled to strike a deal on how to implement the Paris Climate Accord at a United Nations climate summit in Katowice, Poland, one young activist took the mic to call out world leaders for their inaction and immaturity in addressing climate change. Fifteen-year-old climate activist Greta Thunberg criticized world leaders at COP24, accusing them of stealing her and other children's futures by failing to adequately address climate change.

"You say you love your children above all else, and yet you are stealing their future in front of their very eyes," a transcript provided by CNN revealed Thunberg said. "Until you start focusing on what needs to be done rather than what is politically possible, there is no hope. We cannot solve a crisis without treating it as a crisis."

Thunberg's remarks garnered the young teen significant attention, with politicians like Sen. Bernie Sanders and Alexandria Ocasio-Cortez sharing footage of her speech on Twitter. But although Thunberg was likely one of the youngest people in the room, the teenager wasn't interested in being anything but blunt with negotiators. She accused then of speaking only about what she called "green eternal economic growth," alleging that they were "too scared of being unpopular" to speak truthfully.

"You only talk about moving forward with the same bad ideas that got us into this mess, even when the only sensible thing to do is pull the emergency brake," Thunberg said. "You are not mature enough to tell it like is. Even that burden you leave to us children."

"But I don't care about being popular," Thunberg continued. "I care about climate justice and the living planet."

At COP24, Thunberg spoke on behalf of Climate Justice Now, an international coalition of climate advocacy organizations founded in 2007. But the teen has herself been advocating for tougher action on climate change well before she took the stage in Katowice. Earlier this year, Thunberg launched a solitary school strike, protesting Sweden having moved its emissions overseas outside the country's parliament building.

The teen told Democracy Now! that she was inspired by the national school walkouts that happened in the United States after the Parkland school shooting. While Thunberg no longer skips school to strike outside parliament everyday, she told Democracy Now! that she continues to strike every Friday. What's more, her solitary strike has inspired thousands of other children and teens to organize strikes of their own in an effort to demand action on climate change.

On Friday in Katowice, for example, CNN reported that dozens of students walked out of school and into the COP24 summit. According to CNN, the students held signs that read "12 years left," a reference to claims that international climate targets could become unreachable in 12 years from the most recent Intergovernmental Panel on Climate Change report.

"If a few children can get headlines all over the world just by not going to school, then imagine what we could all do together if we really wanted to," she told world leaders at COP24.