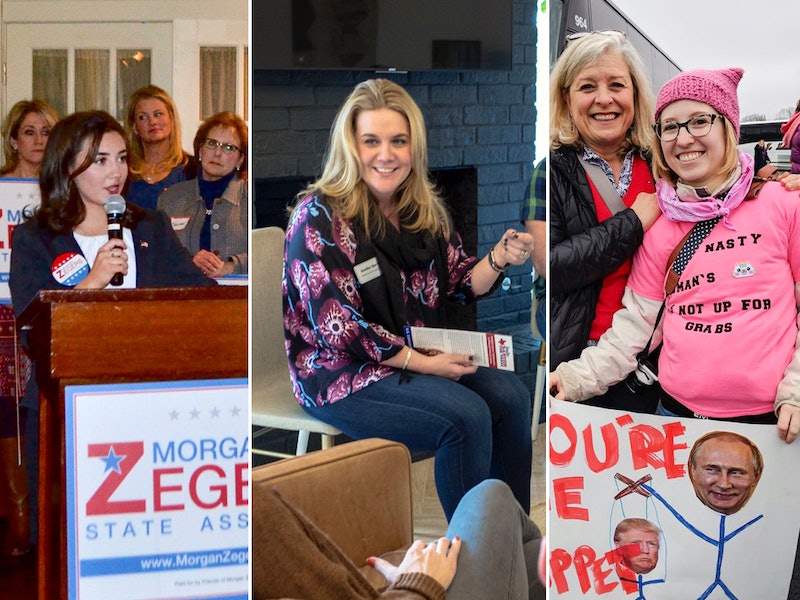 Jenifer Sarver, a Republican running for Congress in Texas, did not vote for Donald Trump. But she's eager, like so many other women in this country, to make her mark on the political world.

"We're in a position where we could lose Republican women in Congress," Sarver, who is 41 years-old and the founder of a communications firm, says. "That's a problem."

Many stories have been written about the tsunami on the left, where hundreds of women are rushing to join the Democratic ticket in local, state, and national races; this narrative is often presented as a reaction to Trump and his administration's policies. But for Republican women, there's a clear passion, and, according to the women Bustle spoke to, a leadership vacuum they believe they can fill.

"I'm running because my congressman is retiring after 31 years," Sarver says with a laugh. Her representative, Lamar Smith, is part of a large GOP departure from Congress, one that includes nearly a quarter of Republican women in the house retiring or leaving their seats to campaign for higher office.

Young Republican women are enthusiastic about their races, excited about appealing to voters who are disenchanted with the GOP, and hopeful there's a real opportunity to define the party in their own image.

A PARTY WITHOUT A CLEAR VISION

"This is a dumpster fire." That was the reaction of Lindsay Brown, a 29-year-old web developer, to the 2016 GOP Presidential field. Back then, Brown was a registered Democrat, committed to progressive issues. But rather than push her deeper into the Democratic party, the election motivated her to switch parties, and to run in the Republican primary for New Jersey's 7th congressional seat.

She's also eager to call out what she considers the limitations of a party she once called her own.

"The Democratic party is so establishment-driven and locked up so tight," Brown says, that she felt there was a greater opportunity for her to make an impact on the right.

Brown's platform, which includes issues like single-payer health care, might put her at odds with much of her own party, but she argues that those issues have the potential to resonate with Republican voters.

"I may come across as a super-leftie-Bernie-Sanders-Democrat, but voters agree with a lot of the same things that I do," Brown says of ideas like a "Medicare For All" plan, a bipartisan compromise on immigration, and environmental protections.

Even among more conservative young Republican women candidates, there is confusion about what the party stands for.

"I'm still trying to figure out where the party is heading."

"I'm still trying to figure out where the party is heading," Morgan Zegers, a 21-year-old Republican candidate and college student running for the New York State Assembly, tells Bustle.

Zegers, who is campaigning on a platform of lower taxes, deregulation and protecting the 2nd amendment, describes millennial conservatives as being "more libertarian." "Fiscal conservatism," she says, "and when it comes to the personal issues, just let me live my life."

Sarver wants to see the party not only refocus on those principles, but to deliver on them. "We're the party that's supposed to be about fiscal discipline, restrained spending, and less government," Sarver tells Bustle. "But in many cases that’s not what we've done."

SO DAMN TIRED OF TWEETSTORMS

In addition to wanting to change the substance of the debates, the women candidates that Bustle spoke to want to see a shift in the party's rhetoric and tenor.

"I do wish he would take a more presidential tone," Zegers says of Trump; she believes he ought to "tone down the tweeting."

For Sarver, the issue extends beyond the president. "We have to restore civility and respect to the political process," she says.

Sarver, who grew up in south Texas, is particularly troubled by the way many Republicans are approaching immigration: "The rhetoric around building a wall, and deporting millions of people who are working hard, making our economy tick, it's damaging, it lacks compassion, and frankly it's not economically viable."

Yet in Trump, Brown sees an opening — "His very malleable political views leave a lot of leeway for interpretation. The current establishment in the House and the Senate has seen that as 'let's run with it and be as conservative as possible.' If we had different leadership running the show it could just as easily be interpreted in a much more centrist way."

FIGHTING FOR THE FUTURE OF THE GOP

In the aftermath of Trump's election, Meghan Milloy co-founded Republican Women for Progress, a nascent effort to give voice to moderate GOP women. Milloy says that elements of fiscal policy keep her from switching her party affiliation.

"We have been in Republican politics our entire careers. We feel like the party has abandoned us," Milloy tells Bustle. "We made the decision to stay in after the election because we want to bring the party back to reality, back to our generation."

"The only thing that makes someone a Republican or a Democrat is what block they check on their voter registration form."

Sarver argues that if the party wants to change, primary turnout needs to change. In Texas, where she is running, Democrats are seeing a surge in early voting this year, but the state has been historically plagued by low turnout.

"We keep getting a more extreme policy agenda," Sarver says, "because the politicians that are elected are being responsive to a very activist base of the party."

That's part of why Sarver decided to throw her hat into the ring. "It was important that my voice was in the race," she says. "I didn't want to watch a race for this seat only be a race to the far right."

Brown is also over the idea that there are only two parties, two platforms, or two ways to see the world. "The only thing that makes someone a Republican or a Democrat," Brown says, "is what block they check on their voter registration form."