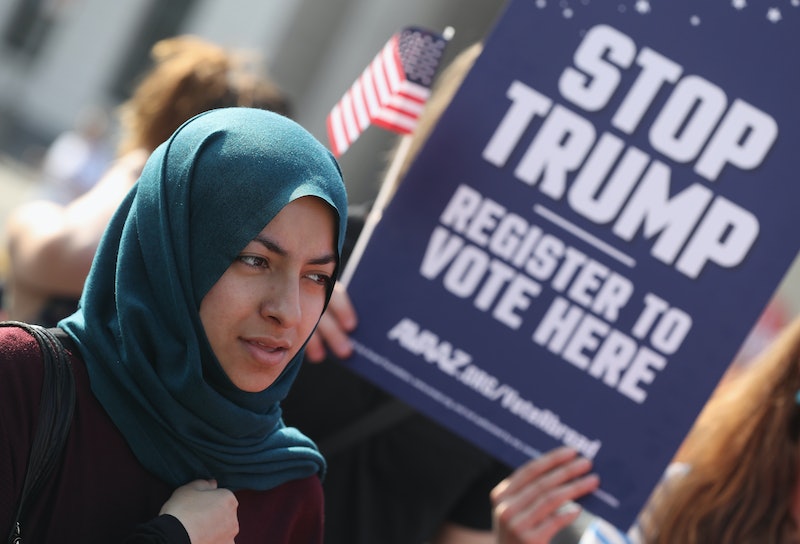 As a whole, young voters have something of a reputation for skipping out on elections — especially when presidential candidates aren't on the ballot. But a new national poll claims that could change come November. According to a poll released Monday by the Institute of Politics at Harvard's Kennedy School, young voters are more likely to vote in midterms this year than they have in previous midterms.

While the latest Institute of Politics poll found that both Democratic and Republican young voters show an increased interest in voting, interest appears to be slightly higher among Democrats. Fifty-four percent of Democrats age 18 to 29 reported they had a "high likelihood" of voting, compared to 43 percent of Republicans in that same age range and 24 percent of young Independent voters.

While it's unclear exactly what's driving more young voters to want to cast ballots, the Institute of Politics' poll reported that a significant majority of those reported as being likely to vote in the midterms also reported being afraid for the country's future. Sixty-five percent of likely young voters said they were "more fearful than hopeful about the future of America," according to the poll.

What's more, 59 percent of all reported likely voters said they would be more fearful of the future if Democrats aren't able to wrestle control of the House away from the Republican Party in the midterms. By comparison, 19 percent said they would have more hope if Republicans maintained control of the House and 20 percent claimed it their feelings would not change no matter which political party was in control.

But does this latest poll mean more young voters will actually turnout to vote in November? The fact is, that's impossible to know. The Institute of Politics' director for polling told The Washington Post that, typically, actual voter turnout among young people ends up being lower than what the poll reports by a number in "the high single digits."

Yet even a turnout of, let's say, 30 percent would represent a significant increase in young voter turnout when compared to 2014, thereby raising the bar for future generations.