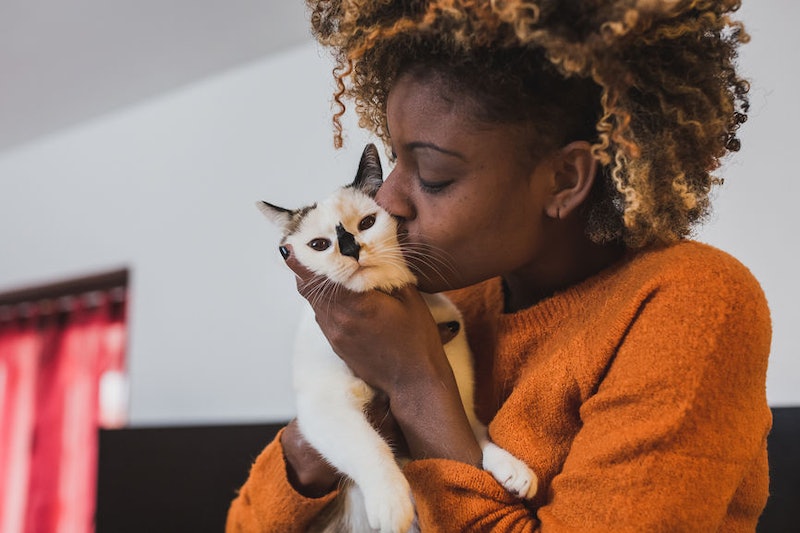 Nothing delights me more, friends, than evidence that demonstrates my cats actually do love me, or understand me, or have more than a fleeting interest in my existence once the fridge door is closed. And a new study from the University of Liverpool does just that, by suggesting that cats are more in sync with their owners than doubters would like to believe — specifically, the study indicates that your cat's personality is likely to match yours, as the Times reports. Hear that, naysayers/dog propagandists? My cats and I are bonded by our similarity! Our personalities align! My cats would not eat me if I died alone in the house!

Researchers used a previously developed test in order to measure five personality traits in cats, known (adorably) as the "Feline Five": friendliness, spontaneity, dominance, neuroticism, and extroversion. 126 participants — 11 men, 115 women — completed surveys that assessed their cats on each of these qualities, ranking the accuracy of statements including, "My cat challenges the usual dominance order with other cats/people in the household," and "My cat moves frequently e.g. often walks, runs, stalks."

The owners also completed similar questionnaires on their own personalities, though their questions also tested for the three "Dark Triad" traits: narcissism, Machiavellianism, and psychopathy. They ranked statements including, "I sympathise with others' feelings," "I tend to want others to admire me," and "I tend to lack remorse." (I'm just going to put it out there: I really feel as though the scientists missed a trick by neglecting to measure the cats' Machiavellianism.)

The study, published in Personality and Individual Differences, found a correlation between the owners' personalities and those of their cats. Owners who scored highly on the dominance scale were more likely to have dominant, impulsive, extroverted, and neurotic cats, while impulsive owners frequently saw their impulsivity reflected in their pets. Owners who demonstrated Dark Triad traits, meanwhile, were more likely to own dominant, neurotic, and impulsive cats.

The researchers concluded that owners are drawn to cats who mirror their personalities, or are more likely to keep a cat who's similar to them. "Dominant cats are greedy, defiant, and aggressive and bullying towards people/other cats, which could be attractive to potential owners who have similar tendencies in their own social interactions," they suggested. "Impulsive cats are excitable and erratic, which could be pleasing to impulsive owners."

Researchers did, however, note that participants in their study self-reported on both their own personalities and that of their cats, meaning the results could be significantly swayed by individual perception. This could indicate that there isn't actually a correlation between owner and cat personalities, and what the results actually reveal is that "owners tend to view their cats differently depending on their own personality traits."

Personally? I'm choosing to take the University of Liverpool study as gospel: it's new, incontrovertible evidence that my cats and I share a bond that would prevail should I no longer be equipped to offer food, a warm house, and numerous comfortable surfaces. Get out of here, sceptics! My cats love me and I won't hear another word about it.