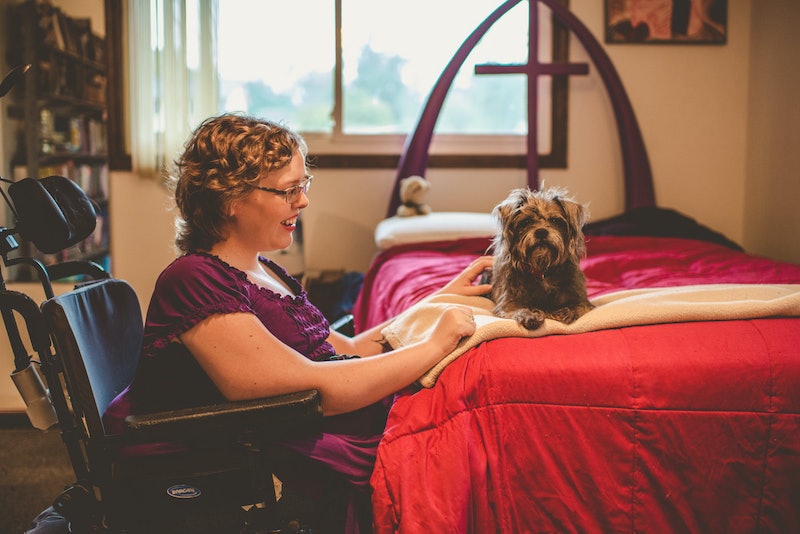 With a myriad of voices coming to the forefront in literature and entertainment, representation has taken many strides in 2018. We’ve seen books like Crazy Rich Asians become blockbuster behemoths, and revolutionary shows like Pose and Atlanta— spotlighting oft-forgotten communities— become household names. But there is room for so much more. Kayla Whaley is a writer who’s made it her mission to create narratives that everyone can relate to, that don't pander to the experience of those with disabilities. Her upcoming work will be featured in Unbroken: 13 Stories Starring Disabled Teens edited by Marieke Nijkamp.

In conversation with Sonya Huber, author of Pain Woman Takes Your Keys, and Other Essays from a Nervous System, we get to know Whaley — who's one of Bustle's 2018 Rule Breakers — in her own words, ahead.

Sonya Huber: What do you think makes you a rule breaker?

Kayla Whaley: Oh, gosh, that's a really good question, considering my first instinct when I heard [I was chosen] was literally, "No that's a mistake, majorly. That's somebody else." But most of my work focuses on disability — on my disability, on disability, broadly — and I think part of the reason people respond to my work is it's written not only without an abled gaze, but sort of inward distance from the abled gaze.

It's something that people haven't necessarily experienced much of, because so much of our representation in media of all kinds — non-fiction, fiction, film, literature, everything — is written and is presented through an abled lens. And that comes with a certain set of rules, unspoken ones sometimes, spoken ones other times, so I think a lot of what I try to do in my work is actively push against that. I don't want my work to be defined in relation to the abled gaze or lack thereof, but I want to acknowledge it as a trend.

People should know the words "abled" and "ableist," like that's not difficult.

KW: That's a really good question that I don't necessarily have an answer to right away. So much of the trick is that the assumption is that your audience is going to primarily be abled, because that's how numbers work, and I feel that as a writer you want to reach the most people as possible. So that assumes, a lot of times, an abled audience. But I'm not interested in writing directly to that audience, or at least not foremost to that audience. And it's really tricky. I've had editors, multiple people actually at different venues, tell me to take out the word "abled" or "ableist" [from my work]. Because readers don't understand what it means.

KW: That's happened multiple times, and every time it's another one of those reminders of, OK, is this a fight that I want to pick? Do I want to give in and reword what I'm saying to make it a little more accessible? People should know the words "abled" and "ableist," like that's not difficult.

SH: Why do you feel like that name — specifically, the thing that actually sums up a whole worldview — why is that the thing that editors want to take out?

KW: It actually really bothered me the first time it happened and I didn't know how to respond to it. I hadn't published as much by then, so I wasn't terribly confident in my space in the publishing world or my ability to get published again, so I was much more willing to make that change, and I did, ultimately. I stripped out all of the references specifically to "ableism" and phrased things weirdly in a way to sort of define it without using the word, and it was very awkward and cumbersome. And I'll admit it's frustrating because it makes it really difficult, then, in my work, to dig into anything deeper — anything more nuanced and more complicated and messy.

SH: Exactly, and it sort of decreases your ability to educate your readers, right?

KW: Yeah, and it also affects my ability to connect with readers. And to connect with disabled readers, because we can tell. When I'm reading a piece, I can tell if it's framed in such a way as to appeal to me and resonate with me or not.

SH: Through hearing feedback that was changing your voice from editors, did you eventually start to push back?

We feel so often, as disabled writers, nobody's gonna care, that's me, that's too specific and out there and other, and it's difficult to put that voice aside and just do the work.

KW: I did, and part of that was I got lucky with a string of really supportive editors after that. Like Nicole Chung, first with The Toast, now with Catapult, has been instrumental as an editorial voice in my career thus far, and a couple other people have been fantastic.

Also, finding and really utilizing more of the disabled community as a foundation of work for me has been phenomenal. There have been so many people — just seeing these disabled writers, some of whom are at similar stages in their careers as I am, work and really find their path and what they're interested in, and really follow that where they want to. It's been so — and I don't use this word lightly — but it's been so inspiring for me as a writer, trying to figure out where I want to position myself going forward, what I want to do with my writing. We feel so often, as disabled writers, nobody's gonna care, that's me, that's too specific and out there and other, and it's difficult to put that voice aside and just do the work. And honestly, it requires a lot of mentally talking myself up. Like, no, I'm not gonna let those expectations and those rules affect what I'm doing unless, again, I choose to for a specific reason.

SH: Community matters so much. What are you doing when you have those days of doubting yourself? What other things do you do to get your energy back in the fight?

KW: Sometimes it's sharing a piece that I've already published, and getting that jolt, that fix of positive reinforcement when people retweet it or share it or say, "Oh yeah, I loved that piece," or when it reaches new readers. Even if it's like two people who've never read it before, and then are like, "Oh that was great," that gives me just a little bit of kick to remind myself that not only can I do this and I have done this, but people want me to do this. That's really helpful in a very, obviously, quick fix kind of way. Sometimes, like the past couple of months, it gets the better of me, and I don't push through, and I think that it’s important to acknowledge that. I think that that's important to acknowledge that, to honor that. Sometimes we all manage, and sometimes we don't win, and that's OK.

There's this mythos of the writer, the creative who sacrifices their lives for their art, and that's bullshit.

SH: Totally, yes. You can't always be Wonder Woman. Sometimes it's just like, OK, I need to nap.

KW: Yeah, exactly. Sometimes I need to just sit around like I did yesterday, and just purely read a romance novel. That's just what I needed. That's gotta be OK. It's gotta be OK to prioritize ourselves in the work that we do, because otherwise it's not only not gonna get done a lot of the times, but it's not gonna be healthy for us. We deserve to not kill ourselves for it. That's important, and I think in some ways, that is breaking a rule as well. There's this mythos of the writer, the creative who sacrifices their lives for their art, and that's bullshit. It's doubly so for disabled writers and disabled creatives. We're already up against a wall most of the time, and I'm not gonna bang my head into it on principle. I'm just not gonna do that. There are better ways to get around that wall, right? It's just not worth it, and it's not fair to myself.

More like this
Savannah Guthrie Got Her First-Ever Tattoo With This Former Wild Child
By Suzanne Zuckerman
Pamela Anderson Is Still A Hopeless Romantic
By Ilana Kaplan
Delia Cai’s Small-Town Romance Goes Beyond The Tropes
By Samantha Leach
Jessica Simpson On The Time She Was Pursued By A Backstreet Boy & An *NSYNC Member
By The Editors
Get Even More From Bustle — Sign Up For The Newsletter
From hair trends to relationship advice, our daily newsletter has everything you need to sound like a person who’s on TikTok, even if you aren’t.