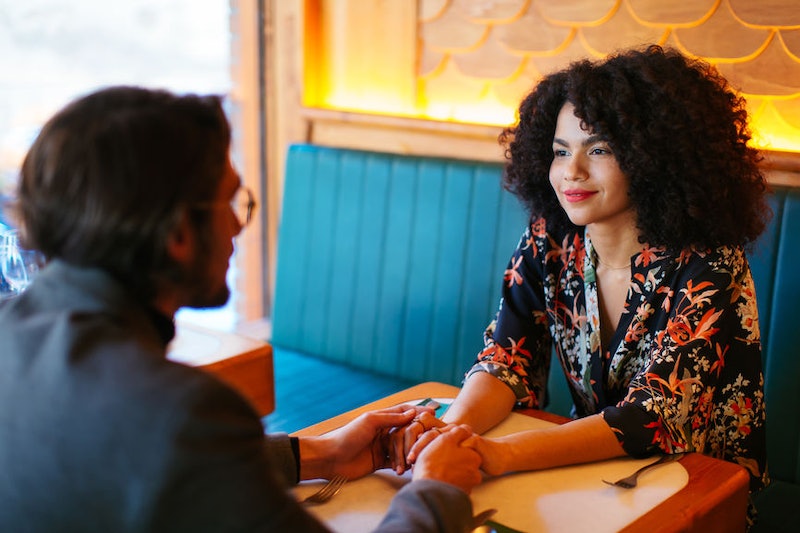 Picture the scene: you're on a first date, it's going surprisingly well, and you're trying desperately to play it cool. No laughing uproariously at every joke-adjacent comment! you tell yourself firmly. Stop touching their arm every two to three minutes! Unfortunately, there's one major giveaway you might have missed. Your voice changes when talking to someone you fancy, a new study has revealed — so if you've got a particularly perceptive date, they might already know you're smitten.

The study was conducted by researchers from three institutions: the University of Sussex, in the UK, the University of Wrocław, Poland, and the SWPS University of Social Sciences and Humanities, also in Poland. As the BBC reports, the researchers recorded conversations between 30 heterosexual speed daters in a cafe. Each man had a six minute conversation with each woman, and both partners indicated afterwards whether they'd like to meet the person again or not. That does indicate a flaw in the study, one depressingly common in relationship research: no LGBTQ+ people were included, meaning the findings can only be said to apply to heterosexual relationships.

Listening to the recordings, the researchers noted a striking pattern: both men and women spoke with a slightly lower pitch if they were attracted to their date. Another finding: women only lowered their voice when speaking to a man they fancied, who'd also received favourable attention from other women in the room. Men, however, lowered their voice with women who other men in the room fancied — even if they didn't fancy her themselves.

"The results of this study support the hypothesis that women and men modulate their voices in real-life mate choice contexts based on personal mate choice preferences and the mate quality of a potential partner," the researchers wrote. And from now on, I'm only going to refer to dating as "mate choice," because I personally think it sounds far more romantic.

The findings contradict a common assumption about women's voices, according to lead author Dr. Katarzyna Pisanski. "Quite a few studies have shown men tend to favour a higher pitch in women because it is feminine and youthful, while women tend to like men to have deeper voices that are seen as more masculine and linked to testosterone," she told the BBC.

"Perhaps things are changing and women are trying to portray other values when they use a lower pitch," Dr. Pisanski added. "It might communicate competence, maturity, or even dominance." (A quick, non-scientific interjection from an occasionally high-pitched woman: there's nothing incompetent or immature about my voice.)

Alternatively, evolutionary psychologist Dr. George Fieldman suggested that the unique speed dating environment could be responsible for the women's lower voices. "If they were on their own with a man, then perhaps they would use a higher pitch," he explained. "But when they are in a group situation competing against other women, they might want to keep their pitch lower. It is more discreet. That's my hunch." Whatever the reason behind the women's lowered tones? It suggests we're not quite as subtle as we think.

This article was originally published on Dec. 20, 2018