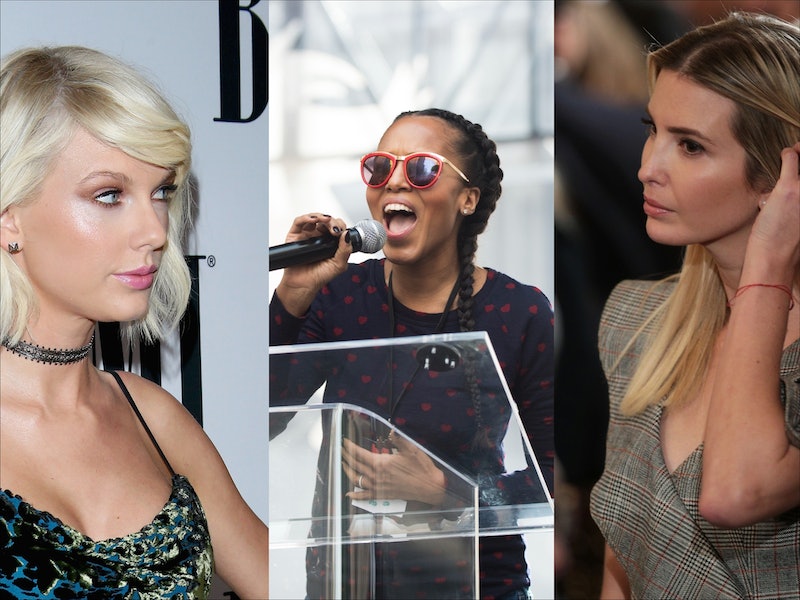 It's easy to roll your eyes when public figures like Ivanka Trump and Taylor Swift, who have reaped all the benefits of feminism, stay quiet about the issues affecting marginalized women. What's harder, however, is to own your responsibility as an ordinary citizen — I mean, how much impact can you really make, anyway? Here's the answer: A ton. To say you're "not political" was never morally acceptable. To say that you're "not political" in America in 2018, when human rights in the United States are tumbling like dominoes, is egregious.

That's not to say that it's easy to be political. Coming down hard on one side of an issue — whether it's abortion, immigration, discrimination, or otherwise — can be exhausting. You can lose friends and family members. You can be doxxed, harassed, threatened. You can feel more alone than ever. No, it's easy to be apolitical, to shrug off your hesitations about issues that don't affect you — it's easy to keep your head down and shut up.

But that doesn't make it right.

That's never been clearer than in 2018. In the past twelve months, America has seen a handful of basic human rights threatened — from transgender rights in the military to women's reproductive rights, to the right to peaceful protest and the right of a free press.

It can feel hopeless, but don't forget that it was "political" everyday Americans who fought tooth and nail against the travel ban, showed up en masse for the Women's March, overcame Republicans' efforts to repeal and replace Obamacare, and claimed watershed electoral victories (come on, a Democratic senator in Alabama?).

Make no mistake: Choosing not to "be political" is a privileged position. If you're not affected by the minimum wage, or the tax bill, or the raging threat of deportation — if you can afford the medical attention you and your family need, if you've benefited from a fair wage, if the color of your skin doesn't dictate how people treat you — then you can afford to ignore politics entirely.

You've benefited from the socioeconomic structures that are in place in the United States, and you don't necessarily have to worry about the people that those same structures systematically hold back.

Except, you should. And not just because those people could have easily been you, under different circumstances — because, to quote the headline of HuffPost editor Kayla Chadwick's piece: "I Don't Know How To Explain To You That You Should Care About Other People."

Obviously, I don't mean that you have to be protesting injustices every hour of every day, or that you shouldn't take a break for self-care whenever you need to. Being "political" simply means becoming aware of what's happening in your town, your state, your country, and taking the time to learn what you can do to create change.

Sometimes, this is going to mean a time commitment — when you show up to a protest, sign a petition, or call your senator, for example. Not doing those things, however, or not being able to do those things, for any reason, does not mean you are not political. There is no checklist; there is no criteria. Either you choose to be aware of the political landscape and as active as your circumstances will allow, or you choose not to be.

What I'd like to make clearest here is that there is a choice. It's a highly personal one — maybe not even one you ever speak about to another person. Only you can judge what your being "political" means, assuming it's safe for you to do so. You can be quietly political, or shout your politics for the rooftops, or engage only in certain issues. (Hell, for all the flak Ivanka Trump and Taylor Swift have caught for not being more openly political, there's some evidence that each of them are quietly fighting for equality behind the scenes.)

Don't forget: You do have a choice. You do not have an excuse. What'll it be?