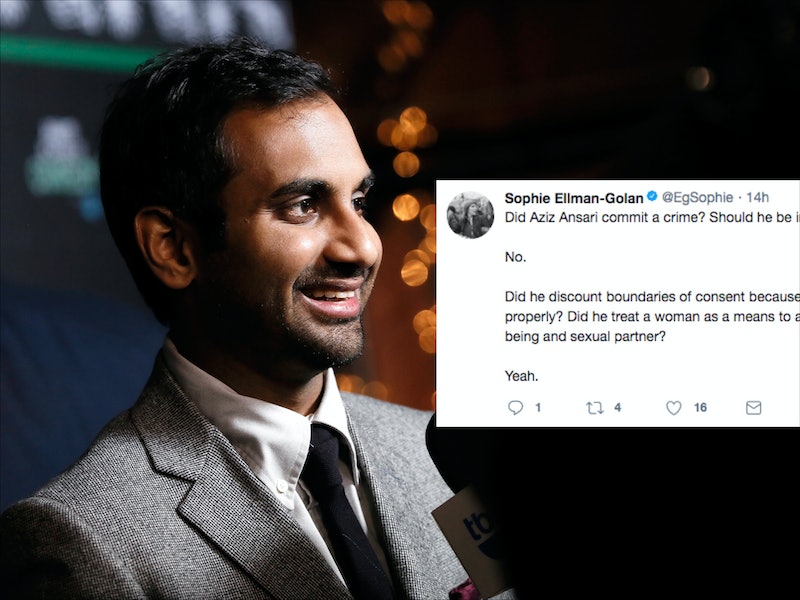 Over the weekend, a photographer given the pseudonym "Grace" went public about her date with Aziz Ansari last fall — a date that Grace said quickly devolved into "the worst night of [her] life." According to a report by Babe's Katie Way, Ansari tried hard to convince Grace to have sex with him, sometimes pretending to relent before forcing the issue once again, according to Grace's account. "I was not listened to and ignored," Grace told Babe. "It was by far the worst experience with a man I've ever had."

In a statement, Ansari acknowledged the sexual encounter, but insisted it had been consensual, at least from his perspective.

It was true that everything did seem okay to me, so when I heard that it was not the case for her, I was surprised and concerned.

Whether you believe Grace or Ansari, or even if you think they're both telling the truth in their own ways, one thing is clear: Nothing that Ansari did, according to both Grace and Ansari, appears to be against the law. This was a key point made in defense of Ansari's version of events, echoed in the numerous think pieces, Twitter comments, and casual conversations brought on by Grace's story — and for the purposes of discussion, let's assume they're right. Let's agree no crime occured. Though I am not a lawyer, and the legal community is still dissecting this issue, we ought to address this argument head on: because nothing he did was technically illegal, it was not wrong.

"But again, was the point of #MeToo to get revenge? To demand perpetrators be punished, fired, humiliated, or banished?"

But was that the point of Grace's story? To get Ansari arrested? To demand repercussions? This assumption implicitly presumes that she was trying to gain something from coming forward, and precludes the idea that maybe she just wanted to share her story, like so many women and men have done, thanks to #MeToo, or to spark a conversation about what is sexual assault and what is not, and what the power dynamics of sex look like in the 21st century.

This, of course, is not to say that the actions attributed to Ansari should be conflated with rape — only that this story, too, deserves our attention.

The Department of Justice defines sexual assault as "any type of sexual contact or behavior that occurs without the explicit consent of the recipient"; this includes forced sexual intercourse, forcible sodomy, and attempted rape, among others. Sexual harassment, meanwhile, is legally defined as:

...Unwelcome sexual advances, requests for sexual favors, and other verbal or physical conduct of a sexual nature constitute sexual harassment when this conduct explicitly or implicitly affects an individual's employment, unreasonably interferes with an individual's work performance, or creates an intimidating, hostile, or offensive work environment.

Still, at least there are names for sexual misconduct and sexual harassment. Each one carries its own legal definition, its own statute of limitations, and legal consequences for perpetrators. But neither appears to perfectly fit Grace's story, and this fact, according to some commentators, is enough to excuse Ansari.

By your own clear description, this was not a rape, nor was it a sexual assault. By your own description, your sexual encounter was unpleasant. It did not send you to the police. It did not affect your workplace or your ability to get a job. ... [T]he only sentence that a guy like that deserves is a bad case of blue balls, not a Hollywood black ball.

Others agreed. "There is a useful term for what Grace experienced on her night with Mr. Ansari," Bari Weiss wrote for The New York Times. "It's called 'bad sex.'"

"Sexual offenses are insidious shape-shifters, existing in some form in all demographics and among people from all walks of life."

The undertone of this argument, and these pieces, is that Grace deserves to be condemned for saying anything at all. They are trying to shut down discussion and pressure Grace, and all others like her, into silence.

I can only imagine that this is why she used a pseudonym — she knew the backlash would be horrific, which is one reason so many survivors never say a thing.

Given the well-established issues with the ways the United States' criminal justice system treats and punishes sexual crimes, from harassment to assault, it's almost absurd to argue that the law is the only litmus test for wrongdoing.

Many were also quick to trace Grace's story, and it's imperfections, to the #MeToo movement. The hashtag brought to light instances of sexual abuse, harassment, and everything in between — both inside and outside of the workplace. As thousands shared their stories, celebrities began sharing their own uncomfortable encounters too and revealed the unsettling behavior they had been privy to at the hands of powerful men and women. The underlying theme of these admissions? We need to address the intertwining dynamics of sex and power. Now.

Yet, none of the perpetrators faced criminal charges, nor are they likely to. (Louis C.K.'s Netflix stand-up special was cancelled, however, and his latest movie scrapped. Harvey Weinstein was fired and exiled from Hollywood.) Even victims of "textbook" sexual deviance almost never find justice by the justice system, and Grace's story is far from textbook.

In short, no matter the circumstances, victims of sex crimes almost never find justice in the criminal system — and that's when the actions are actually illegal in the eyes of the law, which neither Grace nor Babe ever implies about Ansari.

But again, was the point of #MeToo to get revenge? To demand perpetrators be punished, fired, humiliated, or banished?

The people who shared their stories no doubt had a myriad of reasons for speaking up. I do not pretend to speak for all of them, or even a majority of them.

Still, one of my personal takeaways from listening to these stories was that the world is very different for men and for women. That the power dynamics implicit in our work, social, and sexual encounters are consistently poisoned by toxic masculinity — that, as a culture, there was something simmering underneath that could not be contained any longer.

We don't even have a word for the kind of behavior that Grace claims Ansari engaged in — the closest thing to it would be "sexual misconduct," a vague and innocuous term. Legally, the definition of "sexual misconduct" varies widely from state to state.

So, no, you cannot defend any person's actions by claiming those actions don't fit the definition of a sexual wrong — legally, literally, or ethically. Sexual offenses are insidious shape-shifters, existing in some form in all demographics and among people from all walks of life.

But again, do we really need to name and define them all? Can we really demand neat and tidy categories before acknowledging that something is seriously off? What, exactly, do we gain from banning discussions about the difference between charm and coercion?

The core problem here is that Ansari's defenders talk about legal definitions as though they reflect ethical values. They assume that the criminal justice system does its job — but it doesn't, particularly in this field.

We're light years away from defining sexual violations in a way that reflects their seriousness. Who knows how long the legal system will take to catch up? Thanks to Grace's candor, however, we're beginning to have those conversations.