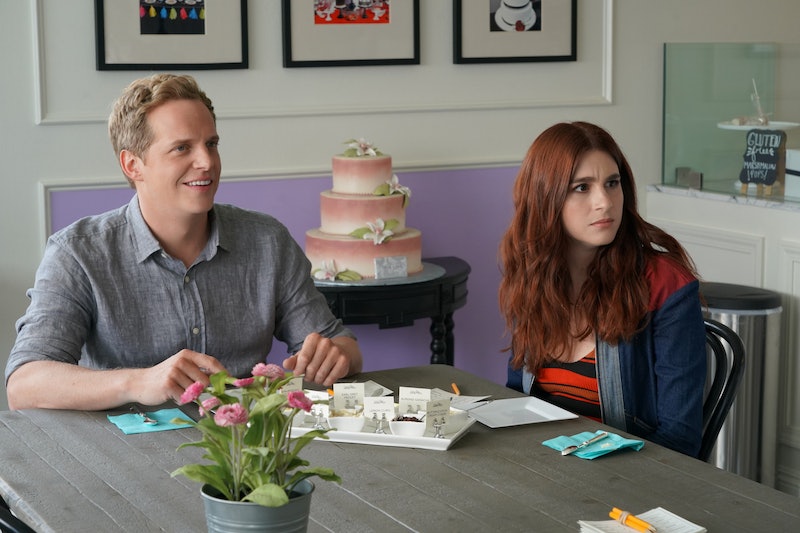 There's a pain that comes with suddenly losing a beloved show. Over the course of however many seasons, you've grown attached to the characters, and it can be hard to accept you won't be spending any more time inside their worlds. You're The Worst's series finale, airing April 3, will surely stir this reaction in many fans, but any disappointment that You're The Worst isn't returning for Season 6 may be lessened by the fact that the series is ending on its own terms. You can rest assured that Jimmy, Gretchen, and the rest of the You're The Worst crew will all get a proper goodbye.

News that You're The Worst was ending first broke in 2017, when Deadline reported it was a mutual decision between FXX and You're The Worst creator and showrunner Stephen Falk. At the time, Falk said that he was "thankful to have the opportunity to be thoroughly judged whether or not we 'stick the landing' – which is a thing people say now that stupid Breaking Bad had to end so damn perfectly." Falk later told TVLine "we probably could've done one more [season]," but "it felt right to me, in terms of five seasons."

Certainly, the show will be missed. Throughout its five season run, it's been praised for its candid depiction of depression. And though its characters were often vile, terrible people, there were a lot of hard truths examined within their stories — not just about depression, but PTSD, friendship, commitment, love.

And of course, fans won't be the only ones missing You're The Worst once it's gone. Aya Cash, who plays Gretchen, told The Cut in January that she was "in denial" about the show ending. "I'm just super sad. I feel like I won the lottery. I had this great thing. Five years and we all still liked each other? It's from what I understand, pretty rare."

Meanwhile Chris Geere, who plays Jimmy, said he was happy to have some time to adjust — and to give viewers what they want. "It's rare to know so far in advance that you're going to get another season, let alone actually know that it's ending," Geere told Metro News, also in January. "You're the Worst has been, and will always be, a sleeper show. The fans seem to keep building over time. The numbers seem to keep growing as we go on. As a TV viewer, if I know that I can watch the entirety of something on a streaming service, that's great. I like that. People like to have a beginning, middle and end and we most definitely have that."

So while the show's cast and crew wish there was more You're The Worst ahead of them, they at least had a few years to wrap their heads around it. And it's a comfort to know that, whether or not Gretchen and Jimmy get married, don't get married, break up, or stay together, the ending will be the way Falk and the rest of the You're The Worst team wanted. But who knows, in an age in which shows are rebooted left and right, what's to keep You're The Worst from making a return to television in 10 years?

More like this
Hulu’s Mike Tyson Series Is Unlikely To Return For Season 2
By Brad Witter
Kathy Hilton May Not Return To 'RHOBH' — At Least Not Full Time
By Jake Viswanath
'House of The Dragon' Episode 6 Will Take Place A Decade After Episode 5
By Kadin Burnett
The ‘Emily In Paris’ Season 3 Release Date Is Here, Plus The First Footage
By Bustle Staff
Get Even More From Bustle — Sign Up For The Newsletter