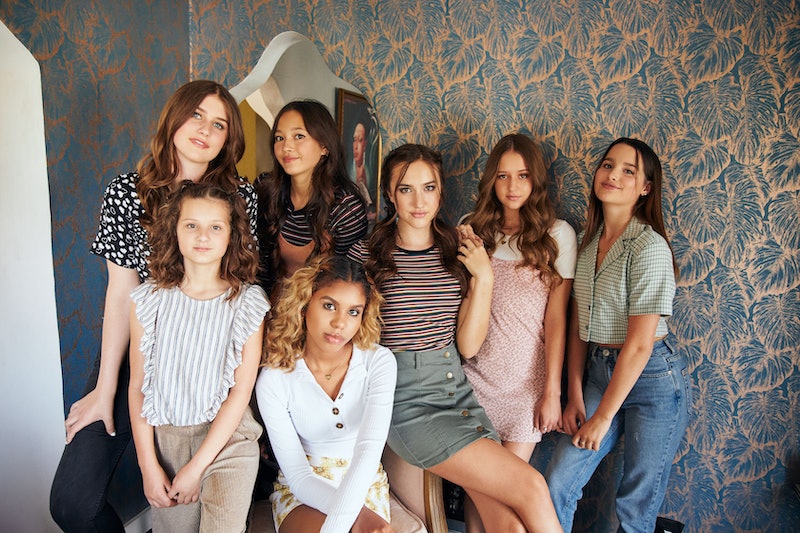 “I want the next season of Riverdale NOW,” Grace, a 16-year-old living in Los Angeles, screams at me from across the country over FaceTime. Three minutes later, she sends me a message through the app TikTok: It’s a video she’s titled #choni. The finale of Riverdale ended less than 7 minutes ago, and Grace has already posted a compilation of the cutest moments between Cheryl Blossom and Toni Topaz (better-known by the ship name #choni) to her 7,119 TikTok followers. “I ship so hard” she confesses.

By the time I finish watching Grace’s 51-second video on TikTok, she has already moved on to watching another show on her computer: Chicken Girls. “Have you seen it? I literally can’t stop,” she says to me. Chicken Girls, which follows a group of dancers as they navigate middle school, is distributed through Brat, a YouTube channel with over three million subscribers. The show grabs the audience's attention from Episode 1, which lasts just over five minutes, and promptly sets up the series centered around a loyal group of friends competing for a limited number of spots on a dance team.

It is no secret that Gen Z (someone born between the late '90s and early 2000s) is finding their entertainment in completely different ways than generations before. In the same way that millennials tuned into routine programming each week for The O.C. or One Tree Hill in the 2000s, today's teenagers are turning to social media platforms for entertainment. When I asked teenagers, all between the ages of 13 and 19, around the world about where they go for entertainment today, their answers all had one thing in common: apps on their phones. Their responses included Snapchat, YouTube, TikTok, and Instagram — not one teenager mentioned a traditional television set. And 100% of those I spoke to said they relied on YouTube for entertainment.

According to a survey by Piper Jaffray, teens are watching just as much, if not slightly more, YouTube every day compared to cable television. YouTube especially has expanded the content production landscape so drastically that channels like Brat, AwesomenessTV, VH1, MTV, and Smoosh, and content creators like Emma Chamberlain, Niki & Gabi, MyLifeAsEva, and the Dolan Twins (who all upload on a scheduled cadence, whether it be weekly or bi-weekly), unify teens around the world and collect millions of views and comments per video.

Two channels that have become leading forces in this new entertainment landscape (and probably don’t even ring a bell for most millennials) are Brat and AwesomenessTV, with more than 3 million and 7 million subscribers, respectively. In a world where cable subscriptions are becoming obsolete, YouTube has replaced the traditional TV experience for young people by housing routine programming for teens where they already are 24 hours a day — social media.

YouTube's mass appeal to a younger audience has expanded to its content creators, as well. Even though most of these these YouTubers aren't on major network shows or recognized by most millennials yet, they've created fan bases that are as large, if not larger and more loyal, than some of TV's biggest performers.

I’d even go as far to argue that she brought back the scrunchie.

Take Emma Chamberlain, a content creator who, at the age of 18, has profound cultural influence. Since Chamberlain launched her channel in 2016, she has surpassed 8 million subscribers on YouTube. Her millions of followers are so captivated by her outgoing personality that they will tune into her even completing a repetitive task like cleaning out her closet or cooking dinner. Not only has she has become a trendsetter on the platform for her unique editing and self-deprecating sense of humor, but she's also landed high-fashion magazine spreads, like Vogue, campaigns, and been a recurring guest at Paris Fashion Week, sitting front row at shows like Louis Vuitton. Even the cadence of her vlogs has become a popular trend on YouTube. I'd even go as far to argue that she brought back the scrunchie.

Chamberlain isn’t the only vlogger turned mainstream celebrity. The Dolan Twins were also invited to attend a Louis Vuitton fashion show and just announced their exclusive brand with Fenty Beauty. Rickey Thompson has become a face for Harper's BAZAAR. Lilly Singh has a talk show on NBC premiering Sept. 16. James Charles attended Anna Wintour's Met Gala. Nikita Dragun, James Charles, and Tana Mongeau were all invited to the VMAs and walked the red carpet. In 2019, YouTubers are celebrities.

YouTube CEO Susan Wojcicki said in February that the platform is aware of the influence these stars have. In 2018, Wojcicki identified YouTube channels with over 1 million subscribers as "the next generation of media companies," which confirms that channels like Brat and Awesomeness, both with well over that, are ahead of the curve.

Rob Fishman, founder of Brat, says that social media is crucial for the success of any programming for this demographic. "Social media has been a great way to find, accelerate, and spotlight talent," Fishman says. Influencers with large and influential followings like kenzie, Indiana, Annie LeBlanc, and more have all organically posted about their love for Brat to their millions of followers in the past, a hugely impactful marketing win.

Brat also works to incorporate each influencer's unique online personalities into their original programming. According to Fishman, Brat's writers room consists of diverse writers well-versed in social media, internet trends, and Gen Z culture who also think about the characters and storylines as they each pertain to the influencers' and talent's personal brands. Fishman explains that this strategy has worked so well throughout his career because "talent drives an audience," and by casting stars with such large following already, the shows should have a built-in fanbase.

Social media is even changing the nature of what these stars share with their fans. Emily Hecht, VP of Programming and Development at Awesomenesstv, explains further the role of social media for programming and creative development: "Our docu-programming embodies this intersection [of relatable and aspirational] by showcasing influencers that our audience relates to and putting them in situations or locations that are aspirational and our audience wants to see more of." Hecht finds that "[one of] the specific series our audience keeps coming back for is Niki and Gabi’s reality series that follows twin influencers and their friend groups on vacation." The shows, which follows Niki and Gabi's traveling in real-time, is unafraid to include "uncensored" parts of these adventures (like fights, pranks, and crying), tapping into the popular trend of being real online.

"What [Brat has] spent as a company over the last few years probably equals as much as a single episode of Game of Thrones..."

But, as content creators have learned in the past with altered algorithms, emerging platforms, and apps (like Vine) being shut down, the ways in which technology reaches young people is always evolving. Since its rebrand in 2016, TikTok, currently the fourth most downloaded app in the world, has become a viable competitor to Instagram, YouTube, and Snapchat. It reached massive popularity with Gen Z in late 2018, which may explain why almost all of the teens I spoke to said that they rely on TikTok for entertainment.

Fishman finds that these video platforms speak to the power of self-produced (and of course, cheaper) social video, especially within this demographic. He adds, "What [Brat has] spent as a company over the last few years probably equals as much as a single episode of Game of Thrones." Although Fishman did not disclose how much money that was, Brat's subscribers are proof that especially with this audience, storytellers no longer necessarily need huge studios, endless budgets, and notable actors but instead a tripod and a magnetic personality will attract millions of views.

High-quality and reasonably budgeted entertainment for these content creators doesn't mean baseless storylines, either. In fact, Madison Kiley, channel manager at Brat, says that the demo watching the channel is really keyed into conversations around identity, friendships, and relationships. "The LGBTQ+ storyline is a big deal to [this audience] right now," Kiley says. "It's also just really heartwarming to see younger audiences talk about representation like this. This wasn't the case when I was younger." Unlike previous generations who had to seek out LGBTQIA+ friendly internet chat rooms on platforms like MySpace, Facebook, and LiveJournal, identity politics are being discussed in the same place that they are being aired, in the comment sections, in TikTok videos, and in vlogs.

That being said, streaming services are certainly not being left behind. Several of the teenagers I talked to mentioned The CW's Riverdale and HBO's Euphoria as shows they watch, and some mentioned HBO's Big Little Lies. Other responses included Netflix's Derry Girls, Friends, Chillings Adventures of Sabrina, and 13 Reasons Why. One teen revealed, "I follow all the Riverdale [actors] now on Instagram. I love when Cheryl and Toni (played by Madelaine Petsch and Vanessa Morgan respectively) hang out IRL. It's like I can watch Riverdale whenever I want through their [personal] Instagram accounts." Another added, “I literally just go to Madelaine’s Instagram account when I miss Riverdale in-between seasons. She also has a fun YouTube channel that I watch constantly.” In unprecedented ways, social media has expanded the entertainment landscape and made stars more public and accessible to their fans. Grace explains, “I found Chicken Girls from Annie LeBlanc’s Instagram and now I watch Chicken Girls because I love Annie LeBlanc."

In many ways for Gen Z, the talent off-screen and characters on-screen have become inseparable. Another teenager opened up to me, "I watch Euphoria because Zendaya is in it and I've always followed her. And now I follow Hunter Shafer who is really cool." This only speaks to the potential growth of these streaming platforms and content creators especially as it pertains to the future of entertainment and celebrity culture.

It also speaks to the volume in which Gen Z is consuming content. When it is time for Grace to hang up our FaceTime 23 minutes later, I compliment the editing in her TikTok video #choni. She responds immediately: “Oh, I literally already forgot about that. I’m already posting a Chicken Girls one right now.”

*Grace's name has been changed