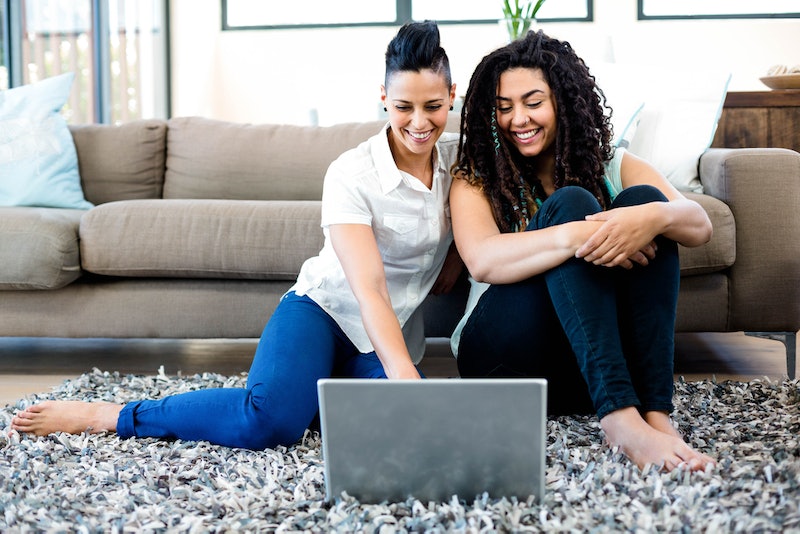 A string of questions float against a millennial pink backdrop: “How do I fall in love? How do I keep that love? And most importantly, how do I get rid of this STD?” No, this is not your standard school sex ed class — it’s the intro to YouTubers Damon Dominique and Joanna Franco’s video “A Sex-Ed Talk that Won’t Freak You Out," which focused on their experiences growing up in different countries. Known to their 1.1 million subscribers as DamonandJo, the duo’s virtual version of The Talk is a departure from their predominantly travel and lifestyle-focused content. But a scroll through the video’s comments section makes it clear that their frank discussion on sexual health and resources was appreciated. “The Health Class we all need!!” commented one user, while another thanked the duo for “talking about sex in such a normal and natural way.”

The video is one of many that have popped up since the beginning of YouTube: sex ed videos made by lifestyle YouTubers, alongside their usual content, with the goal of demystifying topics like sex, masturbation, and STIs to their audiences. Of course, social media being used as a platform for sex education isn’t an entirely new concept — YouTube "sexperts" like Laci Green and Hannah Witton have built careers off of channels that exclusively focus on sex and relationships. But when creators outside sex ed-centered channels contribute to the space, racking up views and introducing vital health information to new audiences, it raises the question of just how effective videos by non-sexperts can be.

It’s easy to understand why viewers are flocking to these videos; middle school and high school sex ed often bring Coach Carr from Mean Girls to mind, along with cringe-inducing health class flashbacks. And since sex education requirements vary from state to state, there can be huge gaps in knowledge: 22 states and the District of Columbia mandate both general sex education and HIV education, but only 13 states require the instruction to be medically accurate. Between 2011 and 2013, the Guttmacher Institute reports that there were “significant” declines in teenage girls’ reports that they received proper instruction regarding topics like consent, birth control, and STIs. For the same time period, roughly half of teens aged 15 to 19 reported learning how to use a condom, and fewer than 6% of LGBT students said their health classes incorporated “positive” representations of LGBT-related topics in 2015.

Enter YouTubers, with their relatability and built-in trust from subscribers. Dominique tells Bustle, “At the end of the day, we honestly didn’t know anyone else who could speak on these topics on a global scale (and who also wouldn’t be ashamed to talk openly about them).”

The notion of shame and taboo surrounding sex is an important one, since some sex educators agree that these videos help normalize discussions about sexuality. The videos are also generally more relatable than the education offered in schools, and most of all, they’re accessible.

“Watching anything on YouTube, you have to be able to step back and decide for yourself what you want to take from it.”

“The reality is a lot of young people are still being brought up in socially conservative households where they don't talk about sex and sexuality, or where they're getting very judgmental, shaming messages,” Elizabeth Schroeder, EdD, MSW, a sexuality and youth development educator, tells Bustle. “So if they can, in privacy, go online and watch one of these videos, that's a really wonderful thing."

Even though sharing personal experiences and reducing the taboo surrounding sex is beneficial, Schroeder raises concerns about the breadth and accuracy of the information. "Unless you're trained in this content area, you don't necessarily know the impact of leaving certain things out that you cut for time,” she says. “When it comes to discussing sex and sexuality, aside from just being inclusive and affirming, there is information that if you're not accurate, it can hurt people.” She adds that the distinction between sexpert career YouTubers like Green and the people making one-off videos is that “the sexperts have done their homework,” and are more credible.

But being a professional may not be the point, explains Dominique. “The thing with watching YouTube is that you have to accept that the people you’re getting your information from are, most of the time, not certified professionals,” says Dominique. “People at home in their bedrooms can relate a lot more to YouTubers who have had an experience than to a licensed professional who may know all the latest science. It’s also because the information is free and can be accessed in an instant.”

While the videos’ accessibility is a strength, it can also make it easy to take the information out of context. “Some of these videos are providing information that might be relevant and useful for a 20-something-year-old, but not so much for a 13-year-old,” says Lucinda Holt, Director of Communications at Answer, an organization that promotes comprehensive sexuality education. The fact that anyone can watch these videos, Holt explains, means that while the information may be useful for its intended demographic, it can’t address the particular age-appropriate needs of every viewer.

So where, then, do these videos fall in the sex education landscape? They’re “a great entry point” for discussions about sex, says Mariotta Gary-Smith, MPH, CSE, co-founder of Women of Color Sexual Health Network. She suggests that creators looking to make videos in the space should be clear about their intentions and the limits of their knowledge, potentially even collaborating with trained sex educators to ensure the accuracy of information. "You can still have a space where you talk about sex and how it's important while promoting information that will support people making the best decisions,” says Gary-Smith.

Schroeder agrees that lifestyle-focused creators can harness their platforms to “talk about [sexuality] so it's not considered such a taboo,” but that they can focus on talking about one thing, rather than try to cover everything, and refer their audience to reputable sexual health resources at the end of the video.

Ultimately, the expert consensus is that these videos help diminish the stigma surrounding sex and can serve as a jump-off to more rigorous and medically accurate sex ed resources. The content is just one tool among many that can guide viewers to a more comprehensive understanding of sexuality. As Dominique puts it, “Watching anything on YouTube, you have to be able to step back and decide for yourself what you want to take from it.”

More like this
On TikTok, "Cbat" Has Been Named The Worst Sex Song Ever
By Lexi Inks
Behind The Hilarity Of The "POV: You Walk Into My Room" TikTok Trend
By Lexi Inks
TikTok's Butter Board Might Be The New Cheese Plate
By Emma Carey
8 Completely Unserious Tips To Make Your Cuffing Season A Success
By Ginny Hogan
Get Even More From Bustle — Sign Up For The Newsletter