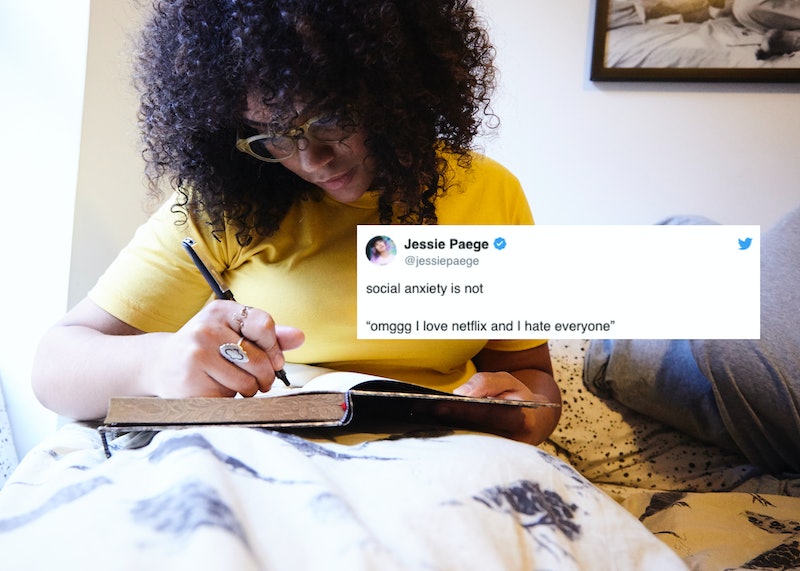 Whenever someone says, "I'm so OCD!" because they hate crooked picture frames, I cringe. Mental illness is never a punchline, but certain conditions are taken less seriously than others. Even if you don't intend to minimize people with mental illnesses, claiming a condition in casual conversation furthers the stigma we face. A viral tweet about social anxiety from YouTuber Jessie Paege debunks some of the pervasive myths surrounding the condition, and it's so necessary. Paege, who has nearly 1.5 million YouTube subscribers, called out people who think being introverted and being socially anxious are the same thing (newsflash: it's not). She also delved into some of the symptoms that people with social anxiety disorder face — and people on Twitter are seriously resonating with her comments.

According to the National Institute of Mental Health, social anxiety disorder — also called social phobia — is an "intense, persistent fear of being watched and judged by others." It's far more serious than simply having an introverted personality, or wanting to spend time at home in front of the television. People with social anxiety disorder may not be able to go to school or work because of their anxiety, and it's usually treated with talk therapy or medication. While you can absolutely live a fulfilling life with the condition, it can be a difficult journey, which is why Paege's point is so important. In less than two days, her stigma-breaking tweet received hundreds of thousands of likes.

It's normal to feel anxious before a job interview or speech in front of a crowd, but if that anxiety causes you to feel upset to the point that it's hard to function, or you avoid those situations entirely because it's so distressing, it may be a sign of something more serious. People with social anxiety disorder often want to be around people, but their anxiety can lead to them not making friends or having romantic relationships, according to The Atlantic. After Paege's tweet, other users opened up about their experiences with social anxiety disorder. Everyday tasks like calling someone back and making doctor's appointments can seem impossible.

To make things worse, people with social anxiety disorder may believe that people dislike or even hate them in normal social interactions, which makes it more difficult to interact with other people. "Social anxiety is being talkative but having a little voice inside you screaming to shut up because they think you’re weird and are only staying out of pity," responded Twitter user @VirginiaAlexaB to Paege's tweet.

I have generalized anxiety disorder, but my anxiety doesn't make it hard to have social interactions, so I'm still learning about social anxiety myself. But in the meantime, I've become careful about how I use the term. While it's possible to have social anxiety without it reaching a clinical level, it's also important to be aware that people with the condition need us to take it seriously.

Anxiety — social or otherwise — can be debilitating and scary, and those of us who deal with it have to put in a significant amount of work to live like our peers. For some people with social anxiety, nausea, extreme self-consciousness and avoiding crowded places is routine. Just like any other medical condition, sufferers aren't at fault for their struggles, and it's important to recognize that.

If you choose to skip a party and binge a Netflix program instead, more power to you (if anything, I'm jealous). But Paege and hundreds of thousands of other people want you to know that social anxiety is more complex than simply staying home or not relating to the people around you. When people with social anxiety disorder speak up, it's time for the rest of us to listen.