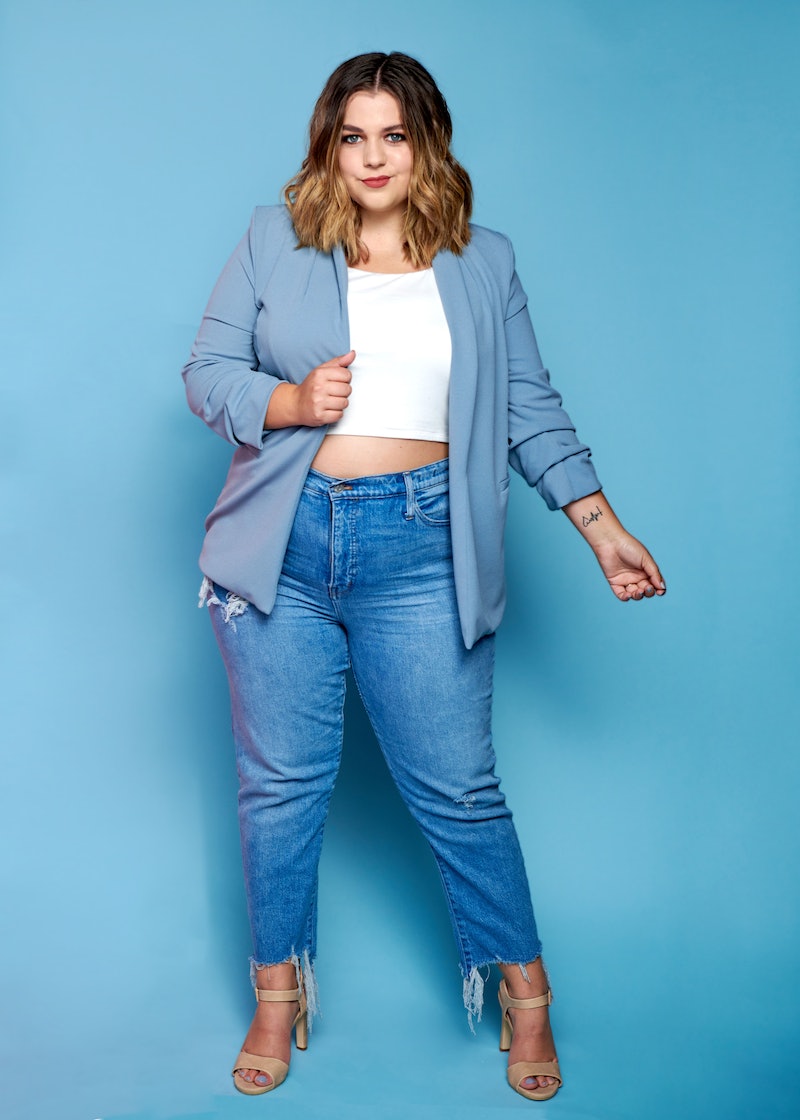 The YouTube fashion and beauty community has always had Hall of Famers. Longtime users of the platform might hear names like Michelle Phan, Bethany Mota, and Blair Fowler from the late aughts and early 2010s and let out a nostalgic sigh. But as we crawl through the last few months of the 2010s and kick off the 2020s, one thing’s for sure: Plus-size fashion YouTuber Sierra Schultzzie should be next on your radar.

The now-23-year-old Schultzzie started her initial eponymous YouTube channel in April 2015 for a simple reason: She was a freshman theater major in college who, because of a lack of seniority, wasn’t landing any roles in school productions. She needed a creative outlet and after some prompting from her then-boyfriend (now-husband) Stephen Gilardi, who pointed out that Schultzzie already spent hours every day watching YouTubers like Tyler Oakley and Jenna Marbles, that outlet did in fact become YouTube. It was love at first sight; Schultzzie posted a new video every Friday for a year without missing an upload.

When Schultzzie first started on the YouTube scene, she posted more traditional DIYs and vlogs, which are mainstays of most fashion and lifestyle channels. What set her apart and gained her initial traction, however, were her videos about styling tips for curvy bodies, which were much more of a rarity back then in a sea of try-on videos mostly geared towards straight-sized women. Given that plus-size women are often expected to be grateful just to find any clothing that fits them, Schultzzie's videos were refreshing because they demanded more, showing that plus-size women have a right to feel fashionable, too. Many of Schultzzie's most popular videos to date have followed a similar thread, including her ongoing series showcasing what "one size fits all" brands look like for plus-size women and highlighting how individual items of clothing fit women who are theoretically the same size differently. More recently, Schultzzie has incorporated more creative challenges (like recreating her ugliest high school outfits and transforming herself into a VSCO girl) while still offering fresh takes and a point of view as a plus-size women.

Since that fateful day in 2015, Schultzzie has grown a bit of an army of digital platforms: She has her main channel, a second vlog-style channel called Sierra & Stephen IRL, and a channel for her new podcast Sierra Unfiltered, which she hosts with her childhood best friend, producer, and frequent on-camera collaborator Skylar Pollitt. That doesn’t even cover her popular Instagram account and her clothing line The Curvy Crew.

Just as YouTube was a natural fit, so too was talking about plus-size fashion as a curvy woman just trying to be stylish. “When I started YouTube, there was never a conscious decision [to talk about plus-size fashion],” she tells Bustle. “It really came from that I’d done 10 or 15 videos and I wanted to do a fashion video, but I’d never seen my body type represented online. I saw a couple of plus-size creators, a lot of standard-size creators, and no one really in between. I thought I’d make style tips for other girls who have similar struggles and can’t find those resources and style inspiration for their body types." In 2019, the most widely-cited average clothing size of a woman in America is a 16/18, but Schultzzie says she still doesn't see many magazines and fashion publications catering to that "every girl."

Because plus-size content has always been a part of her channel, Schultzzie is navigating multiple spaces that are still finding their footing. First and foremost, she’s figuring out what it means to be a curvy or mid-size creator talking about plus-size fashion at a time when it’s suddenly very trendy — especially as someone who was doing it long before it was cool.

When Schultzzie starting vlogging nearly half a decade ago, she found that most of her audience at the time were curvy girls and women like herself trying to find style tips online. Now, she says, that audience has become a lot more body-diverse and diverse in so many other ways.

“Everyone likes body positivity and likes seeing that content, not just women seeking out style inspiration,” she explains. “My channel is a lot more than my size, and I still have the perspective of a mid-size woman.” For some viewers, Schultzzie says, something like a try-on video might be helpful to see what that clothing looks like on their body type; for other people, she hopes they find her videos relatable, fun, and a little different from what else is out there — especially if fashion creators are all reviewing the same latest and greatest release.

For instance, Schultzzie has long done what she calls "brutally honest" reviews of popular YouTubers' trendy clothing lines that have achieved the difficult balance of being truthful and clear about how the clothes fit (or don't fit) her size 12 body, but not going about it in a petty or hurtful way. She shows her audience what the issues are — such as a top that doesn't have a big enough space in the bust area for anyone above an A cup or jeans that aren't properly proportioned for curvy women — and doesn't just tell them what they should believe. One of Schultzzie's strengths has always been, and continues to be, her ability to break down complex feelings into relatable bits. She takes audiences on the journey with her — however wayward it goes.

Schultzzie’s rise — in particular, a surge of success over the past year that’s catapulted her to nearly one million subscribers as plus-size content has become more popular — hasn’t happened in a bubble. Gianluca Russo, a writer and cultural critic who specifically covers plus-size fashion, says that two major moments have converged at the tail end of the 2010s. First, the push for size inclusivity has reached a fever pitch in the fashion industry after more than a decade of slow build. Second, YouTube culture — and drama — has really become mainstream. (Just think of the James Charles and Tati Westbrook ordeal from earlier this year.) “More eyes are being directed to [YouTube], many of whom are seeing that Sierra has been pumping out plus-size content for years now and clearly knows what she’s talking about,” Russo tells Bustle. “Her longevity and authority on the topic, as well as her clear passion and understanding of it as a plus-size woman herself, is what audiences find intriguing.”

Having worked on Schultzzie’s videos for years, her best friend and producer Pollitt agrees. “There’s just something so special about the candor and honesty that comes with the channel,” she says of why she thinks Schultzzie’s work has separated itself from an increasingly saturated market. “When people come to Sierra’s channel, they know what to expect.” That expectation nowadays is a creative and positive take on fashion trends — while still acknowledging their underlying issues.

Of course, that doesn’t mean there isn’t room to grow. Russo points out that being white, blonde, and on the smaller side of the plus-size market are a few systemic factors that enabled Schultzzie’s subscriber count to progress at a faster rate than some other creators. “Sierra holds a lot of privilege within the plus-size space,” he explains. “Going forward, with the platform that she now has, it would be impactful for her to expand her content to also elevate other voices and experiences within the plus-size community.” This is something that Schultzzie says she's thinking about as she continues working on new videos and collaborations.

When it comes to the larger fashion and beauty industries, they also aren’t quite there yet in terms of walking the (plus-size) walk, though Schultzzie says there’ve been immense strides. “There’s a difference between representation and inclusivity: Representation is being invited to the ball and inclusivity is being asked to dance," she says, explaining that plus-size representation has started becoming more mainstream. “But we really need inclusivity.”

There’s another dimension that makes Schultzzie different from what audiences are used to seeing from popular content creators, particularly those traversing the fashion and beauty spaces: She lives outside of the influencer bubbles of Los Angeles and New York. Comfortably situated in San Diego, the online world of Sierra Schultzzie can almost feel a little like the YouTube of yesteryear — when popular creators were vlogging from unsexy American cities and towns and being upfront about the lack of glamour in, say, trying to MacGyver a film set in their parents’ basement.

Schultzzie has no desire to leave; in fact, she’s made San Diego even more of a homestead in the past few months. She’s talked on her channels and podcast about getting married to her husband Stephen in their early twenties and now turning their attention to parenthood in the near-future. Pollitt just moved to San Diego to work on Schultzzie’s brand and business full-time at the beginning of this year. Aside from signing with YouTube entertainment company Fullscreen’s Nick Coffey last spring, Schultzzie’s channels remain largely untouched by outside forces and large influencer circles. She has done numerous collaborations with other YouTube personalities, but has no regular clique or #squad like many influencers do (aside from Pollitt, of course). Other then the time she called out Beautycon for a negative experience, you won’t find her on YouTube's tea channels or involved in inter-creator turmoil. When she does make her way to places like Los Angeles, she’s quick to remind the camera that she’s just there to visit, not to make the move.

By choosing to stay in her own world, Schultzzie has been able to find her own voice and one-of-a-kind style in a genre where videos can often have a lot of uniformity. It's not surprising that when YouTubers constantly hang out and film together in metropolitan areas like Los Angeles or New York, they're often subject to groupthink, and their videos can start to look and sound the same, eventually losing uniqueness — and in turn, fans — in the process. Schultzzie doesn't run into that problem by keeping her distance and also focusing on making her channel more personal. "The less you share, the more accessible you are to everyone and the less controversial you are," she says about why she discusses topics like religion and politics that others in the space steer away from. "But on the other side of that, there's nothing for [audiences] to connect with, either. It's easy to just keep it surface-level...but for me, I want more than that."

It’s a different pace for digital creator life — and a sign that there are other ways for YouTube’s fashion and beauty community to put out fresh content and new ideas without needing drama or an endless stream of ubiquitous haul videos to fuel it. Schultzzie doesn't just show that an everywoman can make it in fashion; she also illustrates that you can make it online while keeping your voice and surroundings, too.

And while expanding the offerings on her channels and rolling out another season of her clothing line are more tangible future projects, Schultzzie’s biggest goal is a little more meta: “I want to leave an impact on women to love their bodies and appreciate themselves as they are.”