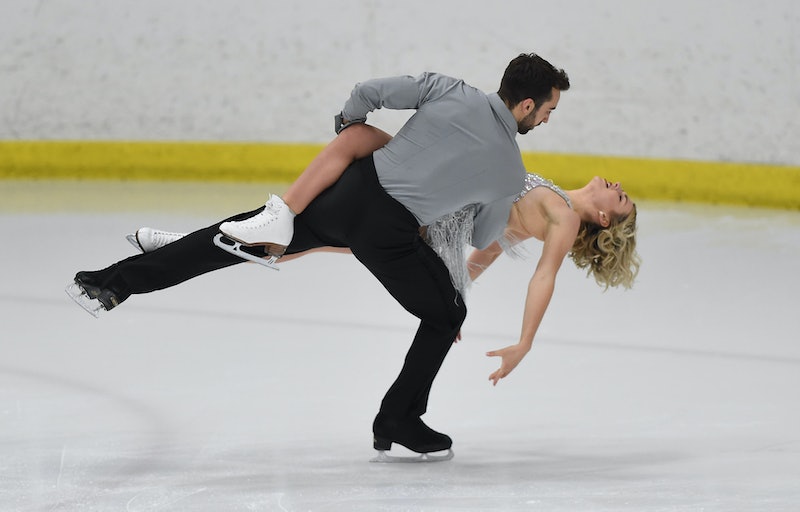 The best thing about ice dancing, particularly at the 2018 Olympics, is that there is every relationship status imaginable represented on the ice. There are the Shibutani siblings from the United States, and of course the allegedly platonic Tessa Virtue and Scott Moir of Canada. Many teams are currently in relationships with each other or even married, but get this — American ice dancer Zachary Donohue's girlfriend is Spanish ice dancer Olivia Smart, according to Cosmopolitan, and Smart's skating partner Adrian Diaz is dating Donohue's skating partner Madison Hubbell. Confusing? It's actually kind of perfect.

Sadly, the duos aren't competing against each other at the Olympics, as Smart and Diaz didn't qualify to represent Spain at the games this year. Though they competed in the 2017 World Championship and were hoping to join Hubbell and Donohue in PyeongChang, Sara Hurtado and Kirill Khaliavin are dancing for Spain instead. There may or may not be some drama involved regarding their qualification and a possibly corrupt judge, according to Olympic specialist Philip Hersh. But unfortunately, what's done is done.

However, while the couples won't see each other on the ice this month, their love story is still adorable. "Olivia and I met at the 2015 World Championships in Shanghai," Donohue said in a recent reddit AMA. "We recognized a similar energy between the two of us... a fun loving, spontaneous, goofy kind of spirit."

In the AMA, Hubbell said that while she and Diaz had met and messaged each other years before, they connected at the 2015 Worlds as well. The Spanish team moved to Montreal to train, and the rest was history for both couples. It doesn't appear that the four of them go on many double dates, at least according to their respective Instagrams. They are coworkers, after all. They see each other all the time.

However, it appears some of that is voluntary: In this mini-documentary that the American team made, you can see the four of them grocery shopping and making dinner together.

"I thought that square created between the four of us would be awkward," Donohue said about their arrangement, "and so initially, I didn't want to go for it. Our attraction to each other eventually won out, and we have been together now for a year and a half."

Donohue and Smart live together in Montreal now too, according to Cosmopolitan, and have two puggles. "What makes it funny is that her favorite breed is Daschund," Donohue said in the AMA, "and my favorite are French Bulldogs. So, we weren't looking at Puggles, but when we saw the two brothers for sale, we fell in love. We had to take them home."

It actually gets even more complicated. Donohue and Hubbell used to date, according to an interview with Team USA's official website, but decided that their partnership was best left professional. “To work harder and do all of these things right," Hubbell said in the interview, "we just realized that to date and be with each other 24-7 with our particular personalities was just explosive."

While we all love the opportunity to 'ship figure skating teams, it's probably a more mature decision to keep it professional while competing.

Smart and Diaz showed up at the U.S. Figure Skating Championships, where their significant others took home the top prize. As of the first weekend, it doesn't look like they even made it to PyeongChang to visit and cheer on Donohue and Hubbell, but the Olympics is still young. Dating your training partner and potential competition definitely still keeps it interesting. They have shared interests and supportive partners who understand all of the ups and downs of competitive figure skating. You couldn't ask for anything more.