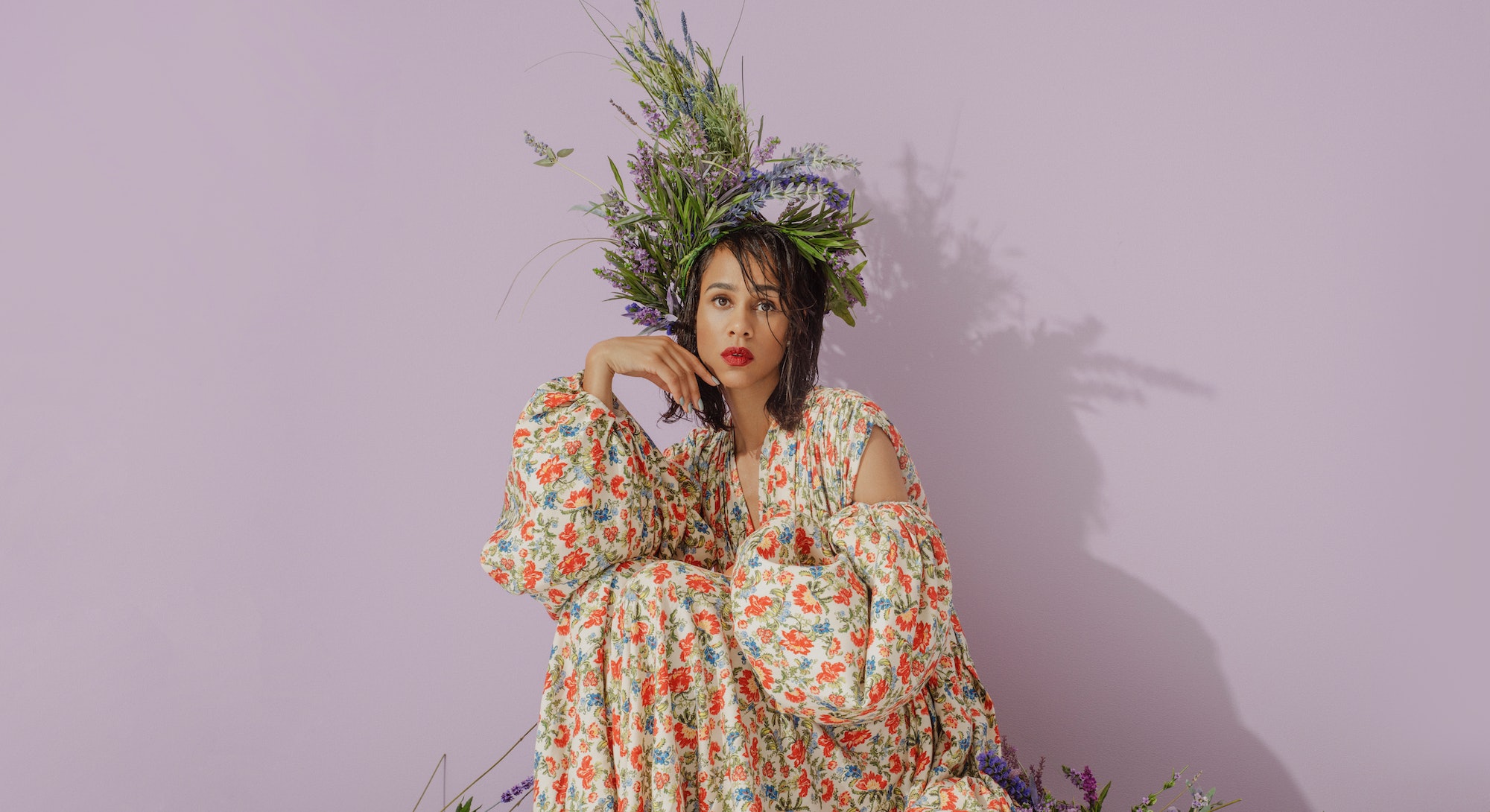 Zawe Ashton is sorry that she is tired. In her dressing room at Manhattan's Jacobs Theatre, at what would be the end of a working day for many, she still has to go over last night’s notes with her director Jamie Lloyd, and get into hair and make-up. Within hours, she will hit the stage for another sold-out night of her Broadway run in Betrayal, the Harold Pinter revival, which will make her a New Yorker until the end of the year.

“I feel like I'm going mad, but I think I'm really into New York. [When I speak], I can already hear my American upward inflections!” she giggles. The play, which also stars Charlie Cox and Tom Hiddleston, has come to New York after a sold-out turn in London in a year that has cemented 35-year-old Ashton's transition from emerging ingenue to bonafide leading lady. In person, she's warm, wickedly funny, and whip-smart — a combination that goes some way to explaining how she's built a career not just in front of the camera, but as a writer, director, playwright, too. Just don't call her an overnight success — it's been nearly 30 years in the making.

A lot of women for a long time have been told to find their voices, but I don’t agree. We have voices. We just need a platform.

Ashton was born and raised in Hackney, a culturally diverse part of East London at the forefront of the city's gentrification. "Cut me open, and I do bleed Hackney," Ashton says. “I remember when cab drivers wouldn’t even go there but for me, there was just local people establishing community and establishing identity. It was multiculturalism, it was biracial, it was anarchy.”

She grew up the eldest child of an Ugandan mother and English father. She describes her younger self as a hyper child. “I just wanted constant stimulation.” Her mother, busy with three kids, enrolled Ashton in the Anna Scher Theatre, an affordable drama class, whose notable alumni ranges from Hollywood crossovers Daniel Kaluuya and Kathy Burke, to Eastenders favourites Sid Owen, Patsy Palmer, and Natalie Cassidy.

“I went in, and there were like three or four baskets on a tiny little stage. One said wigs, one said hats, one said costumes, and I thought to myself, 'I’m going to love this.'" Ashton went on to spend 14 years with the company. "Every Friday night and every Saturday afternoon for 14 years! I think back now, what a disciplined young person that I was. I think I’ve always needed something like that to keep me anchored.”

Small roles in Game On and The Demon Headmaster followed, along with appearances in British staples like The Bill, Casualty, and Holby City, but her success led to bullying at her north London school. “I was different from others at a time when you're supposed to just be blending into that wall,” she says. If there's one thing that's clear, it's that Ashton doesn't do blending in. "I never understood this thing of finding yourself or finding the truth — I couldn’t give a sh*t about the truth," she says.

Earlier this year, she released Character Breakdown, a book about her experiences as actor and the challenge of darting between make-believe and everyday life. "I've never bought into the idea that there is this one self," she says. "I started acting as a 6-year-old child, when my brain was still extremely fragile. I didn’t have hope in hell if I didn’t want to have fractured selves — that moment was over by the time I’d finished my first day on a film set."

I would like to have a baby. I’ve never said that before, but women never say it.

Ashton's breakout role didn't come until years after that first day. In 2011, when she was 27, she debuted her role as the hilarious and sensational Vod in Channel 4's now cult classic, Fresh Meat. “When I got it, I had just done an independent movie called Dreams Of A Life,” she recalls. “That was a one-two punch. I had my independent film world covered and I suddenly had this cult TV world covered, and that was it. My head was above the parapet, and things have just been on the up since then."

Like many actors of her generation, she's only down with the "up" when it's about the work. "I’ve never been bothered about fame," she says. "Even when I was at Anna Scher Theatre, you were never allowed to use the words 'star' or 'fame,' they were like swear words. I want to be a successful actor, never a famous star. Because one is an organic meal that will sustain you, and the other is toxic.”

That does complicate things, because whether she's conscious of it or not, Ashton is a star. Her most recent work has seen her share the screen with Toni Collette in the BBC drama Wanderlust, about a therapist trying to save her fraught relationship with her husband, played by Steven Mackintosh. She also had a lead role in Netflix’s Velvet Buzzsaw, a quirky thriller set in the contemporary art world where she plays Josephina, the object of affection, alongside an idiosyncratic art critic called Morf, played by Jake Gyllenhaal. Her wattage is rising, and unsurprisingly, the designers have come calling. Erdem, Mulberry, Regina Pyo, and Roksanda Illincic all want to dress her, but as Ashton discloses, the style part doesn't always come naturally.

“People talk about ‘effortless style’ but effortless is so far away from any of my experiences of that sort of thing." She now works with stylist, art director, and brand consultant Steph Wilson for her big appearances. "She's not a celebrity stylist, which seems to be a very different breed of person," Ashton explains, "but my stylist is a big reason I am able to cope with events." Their first collaboration — a voluminous, tiered Stella McCartney gown that Ashton wore on the 2016 Olivier's Red Carpet — set the tone in their relationship. "We affectionately called [it] the lampshade dress," Ashton recalls. "It was a complete risk, and a risk that I'd been told again and again and again not to take. 'Don’t go there, you're not well known, you're not famous, unless you’re famous you shouldn’t wear things like this.' I just said, 'I want to dress like the artist I feel,' and that was that."

When you’re working on projects that are male dominated, you are always treated as the last priority.

Ashton might sound assertive, but she swears she is only now coming into her own. “How long have we got to talk about women of colour and imposter syndrome,” Ashton asks, now in her hair and make-up prep. “It’s a real thing, and many people have it. It’s, I think, a particular characteristic of the overachiever. Because you're bottomless, you never think what you’ve achieved is enough. There are lots of little dots, as I approach my 30th year as an actor, that I'm sort of really looking to connect so I can move on to the next stage of my life.”

Part of that next stage is taking up more space. "When you work in film sets, when you’re working on projects that are male dominated, you are always treated as the last priority," she says carefully. "There have been times when, like in sex scenes or whatever, I’ve just been expected to get on with it. No conversation, no time wasting, you're just supposed to minimise your space, and let the money-making industry crack on because time is money." Not any more. "I'm going to call abuse when it’s abuse, and I'm going to call micro-aggression when it’s micro-aggression," she says of on-set behaviour she once might have let slide.

In October, in both Hackney and New York, she will stage For All The Women Who Thought They Were Mad, a play she wrote some 10 years ago when she part of the Royal Court Young Writers group. The play uses statistics to platform the cultural biases at work in medical institutions in Britain that are specifically stacked against women from the African diaspora. “Women being over medicated, unnecessarily being sectioned into their families, losing their jobs. It’s all really shocking, so I wanted to write something for all the women I’ve known [who] thought they were alone. It’s taken so long to get off the ground because it was considered an exposé by every theatrical institution in London, and [I'm] so glad we are doing it," she adds. "A lot of women for a long time have been told to find their voices, but I don’t agree. We have voices. We just need a platform. And we need the words."

One word Ashton is thinking about a lot these days is "motherhood." “I would like to have a baby,” she says slowly. "I’ve never said that before, but women never say it." Despite various rumours about her love life, she emphasises that the baby is a goal, not a current reality. "It's not in the works, and it's not being planned," she says. "There's absolutely not one single detail that I can mention, but the next thing on my agenda is building towards that stage, and I feel very proud of that."

Ashton is aware that the path in that direction will be unreasonably complicated. "The widespread shame of motherhood is criminal, and it needs to stop," she says. "The world can never improve if you disrespect the people that bring life." Still, Ashton is rolling up her sleeves. "I feel like this career has so many connections to my childhood desires, and now I want to figure out what my adult ones are.”